In Goddard was an unusual admixture of the romantic, prophetic inventor and the precise, methodical scientist. The romantic quality was evident when a 17-year old boy climbed a tree on a Worcester, Mass. Farm on October 19, 1899 and dreamed, "How wonderful it would be to make some device which had even the possibility of ascending to Mars." It was characteristic of Goddard that ever afterwards that should be an "anniversary day" in h is life. As he was to recall later, "I was a different boy when I descended from the tree from when I ascended. Existence at last seemed purposive." The purpose was not forgotten in his years as a Clark University professor….is moment of historic triumph was to come on March 17, 1926, when at "Aunt Effie's farm" in Auburn, Mass., one of his rockets rose 41 feet in the air. It was not exactly an "extreme altitude," but it was the first flight a liquid-fueled rocket. In the decades ahead it was to evolve into the V-2 rocket, intercontinental ballistic missiles and the rocket that it is hoped will carry a manned expedition to the moon.

Can anyone confirm the H in Goddard's name stands for Hutchings? I've also seen it as Hutchins. Does anyone know any more about his genelolgy? Thanks!
H. in Robert Goddard's Name

According to the "Family Trees" on http://ancestry.com the name is Robert Hutchings Goddard. see: http://awt.ancestry.com/cgi-bin/igm.cgi?op=GET&db=:2797071&id=I96270
H. in Robert Goddard's Name

Thank you very much for the site. I'll go there and see what more I can learn. Appreciate your time.
H. in Robert Goddard's Name

Robert Hutchings Goddard was born on October 5, 1882 at Maple Hill in Worcester. The family moved to Boston in 1883 where Robert attended the Mount Pleasant, the Hugh O'Brien and English High Schools.In 1898 the family moved back to Maple Hill, Worcester. Source:American Institute of Aeronautics and Astronautics Phamphlet- "Historic Aerospace Site" Profile of"Aunt Effie's Farm" Auburn Massachusetts. This publication also has an extensive bibliography focused on Goddard. www.aiaa.org Clark University in Worcestor also has a continuing exhibit on Goddard and considerable information on his life.. ------------------------- Bill Deane Massachusetts Aviation Historical Society
Login

On this day in 1899, Robert Goddard first considered the concept of space flight, which he would later make a reality. On this particular fall afternoon at age 16, he was sent to prune a cherry tree in his backyard. While he worked, he found himself imagining, as he later wrote in his diary, "how wonderful it would be to make some device which had even the possibility of ascending to Mars, and how it would look on a small scale, if sent up from the meadow at my feet." It was at that moment that Robert Goddard dedicated himself to making space flight a reality. For the rest of his life, Goddard commemorated this day as his "Anniversary Day."

In 1929 he tested the first rocket carrying a scientific payload — a barometer and a camera. 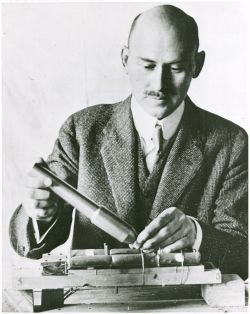 Robert Goddard was a dreamer from the time anyone could remember. Born in Worcester in 1882, he was thinking about space travel when he was still in grade school. He was fascinated with the notion of space flight, and when he read War of the Worlds, he began to wonder what it would take to send people into space.

One fall afternoon when he was 16, he was sent to prune a cherry tree in his backyard. While he worked, he found himself imagining, as he later wrote in his diary, "how wonderful it would be to make some device which had even the possibility of ascending to Mars, and how it would look on a small scale, if sent up from the meadow at my feet." It was at that moment that Robert Goddard dedicated himself to making space flight a reality. "I was a different boy when I descended the tree . . . for existence at last seemed very purposeful." For the rest of his life, Goddard commemorated that day, October 19th, as his "Anniversary Day."

Goddard set out to accomplish his dream. He stayed in Worcester for college at W.P.I. and then to earn a Ph.D. in physics at Clark. During his early post-doctoral years, Goddard began working out the arithmetic of propulsion, calculating the energy-to-weight ratio of various fuels. Discovering that the black powder used for pyrotechnics was not strong enough to propel a rocket, he began using liquid fuels. For 20 years he tinkered and experimented and repeatedly tested rockets; none of them would fly.

In 1920, when he was 38 and a tenured professor at Clark, Goddard decided to publish some of his theories. He wrote an academic paper, "A Method of Reaching Extreme Altitudes," to share his work on rocket technology with his fellow physicists. At the end of the article, he suggested that if one could build a large enough rocket and supply it with a powerful enough fuel, it might be possible to reach the moon.

Goddard soon regretted his decision to go public with his theories. The New York Times jumped on the story. The paper ridiculed Goddard and accused him of lacking an understanding of basic physics, "the knowledge ladled out daily in our high schools." Despite this public humiliation, he persevered. Although he rarely discussed his results publicly again, he did not abandon his research.

. . . he suggested that if one could build a large enough rocket and supply it with a powerful enough fuel, it might be possible to reach the moon.

On March 16, 1926, Goddard took a spindly 10-foot rocket that he had named "Nell" to his aunt's farm in Auburn. He set up the missile and an assistant lit the fuse with a blowtorch attached to a long stick. At first nothing happened; then, as the fuse burned down, the rocket suddenly soared upwards at an astonishing 60 m.p.h. After reaching a height of 41 feet, it arced and fell to earth, landing in the cabbage patch.

Mindful of the scorn heaped on him in 1920, Goddard said little about his achievement. As he succeeded in sending ever-larger rockets into the sky, his activities were hard to hide. In 1920 an 11-foot rocket caused such excitement in Worcester that the police were summoned. The local paper picked up the story and dismissed its importance with a headline that said "Moon Rocket Misses Target by 238,799 1/2 Miles!"

Goddard was undeterred. He continued his research, inventing various techniques to improve rocket flight. In 1929 he tested the first rocket carrying a scientific payload — a barometer and a camera. During the 1930s, he worked to increase the stability and control of the rockets he was building.

Goddard began to feel uneasy about the technical questions he was fielding from German engineers.

Scientists in the U.S. had little faith in Goddard's experiments, but the Germans were following them carefully. By the late 1930s, Goddard began to feel uneasy about the technical questions he was fielding from German engineers. Worried about how the Nazi regime might use his science, Goddard contacted army officials in Washington. He proposed to re-engineer his "moon rockets" as military missiles. The army politely told the professor it had no interest in his offer. Within five years, Germany turned Goddard's discoveries into the V-2 rocket, which caused terrible devastation when directed at London and Antwerp. After the war, Goddard examined a captured V-2 rocket and was dismayed to find that it was designed using his research.

Robert Goddard died of cancer in 1945, before he was recognized as the father of the space age; those who followed in his footsteps understood how much they owed to the Massachusetts professor. The V-2 was transformed into the Redstone, the rocket that propelled the first Americans into space. The Redstone was the forerunner of the Saturn moon rockets and virtually every other U.S. rocket ever launched.

In 1969, as Apollo 11 was heading towards the moon, the New York Times revisited its 1920 article on Robert Goddard's dream. The paper acknowledged that "further investigation and experimentation" had shown it was wrong to denigrate Goddard's knowledge of physics and concluded, "The Times regrets the error."

Robert Goddard's papers are in the Clark University Archives. A memorial is located in Worcester at the corner of Goddard Memorial Drive and Apricot Street.

Goddard’s papers are at the Clark University archives.

NASA Website: From Stargazers to Starships, by David P. Stern.