From a 1921 interview with Robert Frost:

None of my relatives wanted me to write. Grandfather wanted me to be a lawyer. My mother was very fond of poetry, and, while she never said so, I always felt that underneath she wanted me to write. So I entered college. While my marks were always good, I somehow felt that I was wasting time, and so left college. Later I tried it again, but eventually had the same feeling, and I left again. My grandfather was disgusted. I was never going to amount to much. Most folks felt that way about me. Thus I drifted along.

….The poet must plan wide. He must be willing to wash dishes if necessary or to do other things, and then do what he can with his writing as he can. It took me twenty years. I taught school on the side. I have done many things to make both ends meet. We have seen hard times financially—very hard times. But now I am getting all I need for our living, a comfortable one, through my poems . . .

Yes, there is lots of luck in it. Both my wife and I liked the long, quiet, sustained adventure of it all. Mrs. Frost went with me in the same spirit. I never allowed the spirit of I-must-get-a-reputation-or-die to take hold of me. The reward lies really in the end when people like what you write.

thanks for posting this. i always wondered if writers got annoyed with how analytical people can be, people who arent them...
Robert Frost at Umass

Quote: Originally posted by: ercala thanks for posting this. i always wondered if writers got annoyed with how analytical people can be, people who arent them...

I always loved his - "Home is where - when you go there - they have to take you in."
Frost

When I was in the 8th grade, I had an English teacher that was also a football coach. He liked talking football more than poerty, but for some reason he made us all memorize Frost's "Stopping BY A Wood On A Snowy Evening". That poem has stayed with me until this day. Every summer business brings me to Amherst, MA. I can not help myself, I must visit The Jones Library which has a marvelous Frost display.
Frost

I come back to "Stopping in the by Woods..." again and again too. Also the poem that starts "O Hushed October morning mild, thy leaves are ready for the fall/Tomorrow's wind if it be mild/ shall waste them all..." and "Fire and Ice" ... and so many more Frost poems that just nail New England and us who are formed by it. Frost was apparently an SOB to his wife, other poets, and who knows who else? Still, so many of his poems speak so to the soul, and how can the soul not forgive him everything because he knows it? Thank you MM, it's wonderful to be brought back to Frost again.
Move to Lawrence & Salem

"He lived in San Francisco until his father's death from tuberculosis when he was 11 years old. His mother moved the family back to her in-laws' home in Lawrence and six months later to Salem. ... At 14, he enrolled in Lawrence High School," So did Frost and his mother move back to Lawrence and if so how long did they stay in Salem? From the chronology it doesn't seem like they lived in Salem that long.
Login

On this day in 1963, Robert Frost died, the most popular and renowned American poet of the twentieth century. But his success was a long time in coming. It was as a student at Lawrence High School that he discovered he had a gift and a passion for poetry. His first published poem appeared in the school newspaper in 1890. It was another four years before he sold his first — entirely forgettable — poem to a New York newspaper. Almost two decades of failure followed. Only after a three-year stay in England, did Frost finally find his poetic voice and become the man who won four Pulitzer Prizes and received so many honorary degrees that he had his academic hoods made into a quilt.

For a while he worked for a Lawrence shoemaker. 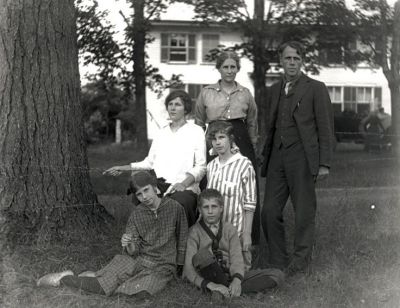 Robert Frost once explained to a newspaper reporter, "I hear everything I write. All poetry to me is first a matter of sound." The sounds he expressed in his poetry were the cadences and rhythms of New Englanders' everyday speech. Frost found his poetic voice listening to, and then writing about, the working people of New England. But Robert Frost was not a regional poet. As one reviewer put it, Frost was to New England as Dante was to Florence: an artist able to express universal themes in local stories.

Frost was not a native of Massachusetts. He lived in San Francisco until his father's death from tuberculosis when he was 11 years old. His mother moved the family back to her in-laws' home in Lawrence and six months later to Salem. There Frost attended school for the first time. At 14, he enrolled in Lawrence High School, where he excelled at literature and languages and rose to the top of his class.

Walking home from school one day, he found himself reflecting on a story his history teacher had told the class. A poem formed in his head. The next day, Frost gave it to the editor of the school newspaper. Soon he had his first poem published, and his dream of becoming a poet began to take shape.

"I hear everything I write. All poetry to me is first a matter of sound."

Frost discovered another love at Lawrence High School, his co-valedictorian, Elinor White. After graduation, Elinor left for St. Lawrence College, while Frost accepted a full scholarship to Dartmouth. After only a few months, he left college and returned home. He later recalled, "My year and a half of the [Lawrence] district school, and my four years in the Lawrence High School were the heart of my education. They suited me perfectly." All he wanted was to marry Elinor and become a poet.

Elinor White was determined to finish college and insisted that Frost find a way to support them before she would agree to marry. Frost tried a series of jobs and was a success at none of them. For a while he worked for a Lawrence shoemaker. "I spent the entire summer carrying shoe nails in my mouth. And I owe everything to the fact that I neither swallowed nor exhaled," he later remembered. He clerked at one factory and was a lamplighter at another and helped his mother with her teaching job.

In 1894, he finally managed to sell one of his poems to a New York newspaper, fueling his hopes that he could someday make a living as a poet. In the meantime, he worked briefly as a reporter for a Lawrence newspaper — a job he quit when he decided that a poet needed "time when nothing was happening, or seemed to be happening" — and taught school.

He decided that a poet needed "time when nothing was happening, or seemed to be happening."

In 1895, Elinor White finally consented to marry him. Their first child was born in 1896. Frost decided to try college again; at age 23, he entered Harvard. He excelled at his studies but was unhappy and depressed. A Lawrence doctor advised him to leave school, change his sedentary life, and become a farmer — "the best piece of advice Robert Frost ever received." The Frosts moved to Methuen and tried their hands at chicken farming with little success. Elinor persuaded Frost's grandfather to lend them the money to buy a farm just over the Massachusetts border in Derry, New Hampshire. For the next ten years, the Frosts lived in Derry, while Robert Frost farmed, wrote, and taught to supplement the family income.

In 1912, he sold the farm and used the proceeds to move his family to England, where he hoped he could focus exclusively on writing. An ocean away from the people and places of his beloved New England, he finally found his poetic voice. Frost wrote constantly, revising much of what he had composed in earlier years.

The English loved his work. Two volumes of his poems were published to rave reviews. When the outbreak of World War I forced the family to return to the U.S. in 1915, Frost discovered that, as in Homer's Odyssey — one of his inspirations — he had had to journey abroad before he could return home a hero.

An ocean away from the people and places of his beloved New England, he finally found his poetic voice.

Frost credited his success to the simplicity of both the subject and style of his poems. He liked to write about the everyday objects and landscapes of New England. Frost's style drew from the artless cadences and sounds of New Englanders' speech. He liked to "speak" his poetry to audiences, to draw attention to the artistry in the sound of the human voice. "The ear does it," he wrote; "the ear is the only true writer and the only true reader."

After his return to the U.S., Frost became the most popular and renowned American poet of the twentieth century. Between 1924 and 1943, he won four Pulitzer Prizes. During most of the 1920s and 1930s, he spent his summers in Vermont and became closely associated with the state. He taught at the Bread Loaf School of English, located near his Vermont farm, nearly every summer for 42 years.

In 1961 an aging Robert Frost braved the frigid weather to read a poem at the inauguration of John F. Kennedy. He died in Boston on January 29, 1963. At the memorial service at Amherst College, over 700 guests listened to readings of Frost's poetry. Later that year, President Kennedy paid tribute to the poet at the groundbreaking for the Robert Frost Library at Amherst College. Frost had achieved his often-stated ambition of "lodging a few poems where they can't be gotten rid of easily."

The location of Robert Frost's Boston home is identified on the self-guided Boston Literary Walk.

This Mass Moment occurred in the Northeast and Western regions of Massachusetts.

Lawrence Thompson was Robert Frost's authorized biographer, but his Robert Frost: The Years of Triumph (Henry Holt & Co., 1970) portrays Frost unsympathetically as a "monster of egotism."