HOW SHE CAUSED THE RECENT

The friends of the house say that if Mrs. Green had taken up the loan made to her husband it would not have been forced to suspend. It makes her largely responsible for the failure and subjects her to much criticism for the selfishness which actuated her conduct towards a firm which for twenty years has acted as her financial agent, collecting her interest and looking after her interest, besides guarding with honor the securities held by it in trust for her, amounting to the enormous total of $25,000,000. The friends say that if, under a strong pressure, the firm had but used for a day or two a million or more of her securities in its possession, it might have bridged over the gulf and saved itself from financial wreck.

Quoted in Hetty: The Genius and Madness of America's First Female Tycoon, by Charles Slack, (Ecco, 2004).

On this day in 1834, the wealthiest whaling family in New Bedford celebrated the birth of their only daughter. This little girl would grow up to be the richest — and, according to legend, the most miserly — woman in America. Through shrewd investing, Hetty Robinson Green parlayed a $100,000 inheritance into one of the largest fortunes in the United States. Stories of her eccentricities abound. She lived in low-rent tenements in New Jersey and moved frequently to avoid property taxes. She ate 15-cent lunches and always used public transport. By the time she died in 1916, Hetty Green had a net worth of $100,000,000 — more than 2.5 billion in today's dollars. She accomplished this at a time when American women could not yet vote. 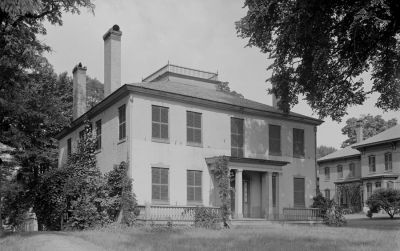 New Bedford in the 1830s was one of the world's leading whaling ports. While Hetty Robinson's family had made a fortune in the whaling industry, they lived in simplicity and comfort, rather than luxury. As Quakers, they valued plain houses and furnishings, modest dress, thriftiness, and hard work. Hetty was an only child. Her mother was a reclusive invalid, and the little girl spent most of her time in the company of her father, the strong-minded businessman Edward Robinson.

Hetty's financial education — unheard of for a girl at the time — came, quite literally, at her father's knee. As a small child, she accompanied him to work at his accounting house on the New Bedford waterfront. He suffered from poor eyesight, so from the age of six, Hetty began reading him the financial news. By 15, she later recalled, she knew more than most businessmen, and she had learned other lessons as well. "My father taught me never to owe anyone anything. Not even kindness."

"My father taught me never to owe anyone anything. Not even kindness."

An aunt tried in vain to interest the girl in more traditional feminine pursuits. Although she briefly attended three different private schools, Hetty resented being controlled by others and had no patience with social convention. As she matured into a strikingly attractive young woman, her aunt began to despair that Hetty would ever conform to the standards of upper-class gentility. Disturbed by her niece's bold manners and outspokenness and by her lack of interest in her appearance, her aunt persuaded Edward Robinson to send his 20-year-old daughter to New York to learn the ways of polite society.

Beautiful and high-spirited, Hetty found herself pursued by many eligible young men. Moving between New York and New Bedford, she attended balls, luncheons, and parties, but high society held little appeal for her. Convinced that her suitors were only interested in her money, she turned down all offers of marriage until, in her mid-thirties, she fell in love with Ernest Green, a man who possessed his own fortune. They married in 1867.

The timing was fortuitous. Both her father and her aunt had died within a few months of each other two years before. She had expected to be her aunt's heir and was dismayed to discover that the bulk of the estate was left to charity. Adding to her outrage was the fact that her inheritance from her father was tied up in trusts controlled by men. Hetty Robinson Green sued. After a protracted and ugly lawsuit, the first of many she would bring against her financial adversaries, she emerged with $100,000, a comfortable but relatively modest sum, given the family's wealth. But at least now she was in control of her own financial destiny.

Convinced that her suitors were only interested in her money, she turned down all offers of marriage until, in her mid-thirties, she fell in love with Ernest Green, a man who possessed his own fortune.

After a period in England and the birth of a son and daughter, the Greens settled in Ernest Green's hometown of Bellows Falls, Vermont. There, the neighbors were fascinated and sometimes appalled by the woman they came to call "the pride and pain of Bellows Falls." People gossiped about the compulsive penny pincher who dressed in drab clothes, bought bags of broken cookies in bulk, posed as a pauper to get free medical care, haggled endlessly over every bill, and was said to have stayed up all night searching for a lost two-cent stamp.

Life changed dramatically for the Greens in 1885. Ernest Green lost his money, and his wife was forced to cover some of his debts. Enraged at what she considered her husband's irresponsible behavior, Hetty left him and took her children to New York, where she could keep a closer eye on her growing fortune. It was at this point that the eccentric Mrs. Green began to capture public attention.

"There is no secret in fortune making. All you have to do is buy cheap and sell dear, act with thrift and shrewdness and be persistent."

Dressed in her trademark Quaker black, Hetty would make the rounds of Wall St. each day. A shrewd but conservative investor, she followed a simple strategy. "I don't believe much in stocks. I never buy industrials. Railroads and real estate are the things I like," she told a newspaper. "Before deciding on an investment, I seek out every kind of information about it. There is no secret in fortune making. All you have to do is buy cheap and sell dear, act with thrift and shrewdness and be persistent."

By doing things her way, Hetty amassed a fortune of $100,000,000. On several occasions, her loans saved New York City from bankruptcy. When she changed her interest rates, investors followed the news as closely as their counterparts do meetings of the Federal Reserve Bank today.

When she died in 1916, Hetty Green left her entire estate to her children. Her son insisted that his mother was not the miser of legend but had kept secret a long history of making anonymous donations to charity for fear of being overwhelmed by requests for assistance, a claim that has never been substantiated.