Representative Edith Nourse Rogers, who served in Congress thirty-five years, longer than any other woman, died this morning at Phillips House, Massachusetts General Hospital, after a short illness. She was 79 years old.

. . . Representative Rogers got into politics when her husband died on March 28, 1925, during his sixth term in the House. Three months after his death, Mrs. Rogers was elected to fill the unexpired term. Then 44 years old, she planned to serve only a few years.

Mrs. Rogers represented the Fifth District of Massachusetts, an area in the east-central section of the state where farming, suburban and industrial interests, including the manufacturing city of Lowell, are represented. She might have been described as an independent Republican who had strong appeal to veterans, labor and industry. She usually won by big majorities. During her long career in the House she was known as a strong champion of veterans' legislation.

. . .She played a major role in drafting the G.I. bill of Rights for veterans of World War II. It was she who introduced the bill that created the Women's Army Corps, the WAC. In recognition of her hard work on behalf of the G.I. Bill, president Franklin D. Roosevelt presented to her the pen with which he signed it.

You might also have mentioned that the VA Hospital in Bedford, MA has been named after her.
Edith Nourse Rogers

On this day in 1960, Representative Edith Nourse Rogers died of a heart attack in a Boston hospital, just three days before the end of her nineteenth campaign. The longest-serving woman in congressional history, she was first elected in 1927 to fill the seat occupied by her late husband. For the next 35 years, she represented her hometown of Lowell and the rest of the Massachusetts Fifth District, making veterans' rights her highest priority. The fearlessness that she showed as an amateur pilot in the era of unsteady biplanes served her well on the House floor. She was an outspoken opponent of totalitarianism, denouncing Hitler's treatment of the Jews as early as 1933, and an early advocate of the Equal Rights Amendment.

She was one of the principal authors and sponsors of the historic GI Bill, which changed the lives of so many veterans and re-shaped the American economy. 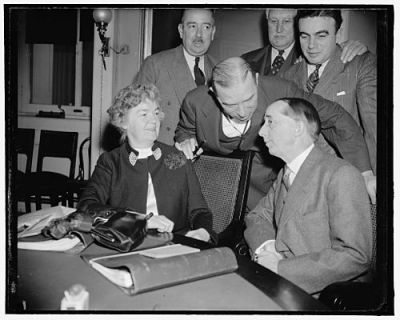 In the late summer of 1960, as she approached the end of another re-election campaign, 80-year-old Edith Nourse Rogers seemed politically invincible. But her popularity with voters could not save her from the effects of age. Failing health forced her to check into a hospital. She used the name "Edith White" to avoid endangering her campaign, but three days before the primary, she died of a heart attack.

Edith Nourse was born in 1881 in Saco, Maine, the only daughter of a well-to-do family. Her Harvard-educated father, Franklin T. Nourse, managed a large textile mill. In 1895 the family moved to Lowell, where Edith attended a small private girls' school. Her parents had the means to send her to a finishing school in Paris and then on a European tour. On her return to Lowell, she quickly became a popular socialite. A "tearing beauty," she was charming, bright, and hardworking.

At the age of 26, Edith Nourse married John Jacob Rogers, a well-connected Lowell lawyer with political ambitions. In 1912 five years into their marriage, he won election to Congress. He would represent the Fifth District for the next 13 years.

When she won with 72 percent of the vote, becoming only the sixth woman elected to Congress, she hoped everyone would "forget as soon as possible that she was a woman." 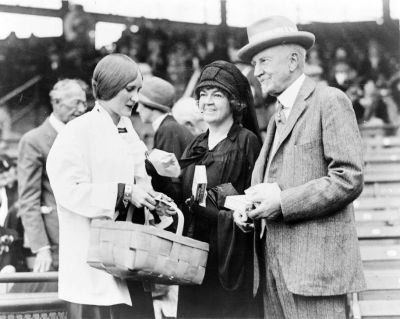 Settled in Washington, Edith gracefully fulfilled the traditional role of a politician's wife. However, her life changed in 1917 when she accompanied her husband and other members of the House Foreign Affairs Committee on a fact-finding mission to Britain and France. What she saw on the front and in the field hospitals moved her deeply. When she returned to Washington, she volunteered for the Red Cross and began working seven days a week at Walter Reed Army Medical Center.

In 1922 President Warren Harding named her Inspector of Veterans' Hospitals at a token salary of $1 a year. Both of the next two presidents would renew the appointment. As she visited veterans' hospitals around the country, Edith Nourse Rogers became knowledgeable and passionate about veterans' medical needs. She could be a harsh critic, at one point complaining that the Agriculture Department spent more money on pigs than the government did on ill and injured veterans.

In 1924, at the peak of his career, John Rogers was diagnosed with Hodgkin's disease. He died in 1925. The couple had no children, and family and political supporters urged Mrs. Rogers to run for his seat.

She could be a harsh critic, at one point complaining that the Agriculture Department spent more money on pigs than the government did on ill and injured veterans.

Initially, she hesitated to run, but eventually agreed, believing that her husband would wish her to carry on his work. A special election was held. When she won with 72 percent of the vote, becoming only the sixth woman elected to Congress, she hoped everyone would "forget as soon as possible that she was a woman." A Republican, she would win every one of the next 18 elections, even during the Democratic landslides of the New Deal.

During her career in the House, Edith Nourse Rogers served many years on the Civil Service and Foreign Affairs Committees. She sponsored bills to establish the Women's Army Auxiliary Corps, expand the Nurses Corps in the Veterans Administration, and provide benefits for veterans of the Korean War. She is credited with having brought more than a billion dollars worth of contracts to Massachusetts. But her proudest accomplishment came in 1944, when she was one of the principal authors and sponsors of the historic GI Bill, which changed the lives of so many veterans and re-shaped the American economy.

She was an inspiration for many of the women who followed her into Congress. Massachusetts Representative Margaret Heckler explained, "Since [Rogers] was a woman in Congress, I didn't have to plow that ground. She made it possible for me to run." Rogers embodied femininity — she always wore a corsage of orchids and gardenias — and determination. She adopted and lived by the military motto: "Fight hard, fight fair, and persevere."

The Arthur and Elizabeth Schlesinger Library on the History of Women in America, located on the Radcliffe Common of Harvard University, holds the papers of Edith Nourse Rogers.

On this day in 1838 a woman addressed a legislative body for the first time in American history. An overflow crowd gathered at the State House in Boston as Angelina Grimké, daughter of a South...