ST. LOUIS — The Boston Red Sox — yes, the Boston Red Sox! — are World Series champions at long, long last. No more curse and no doubt about it. Ridiculed and reviled through decades of defeat, the Red Sox didn't just beat the St. Louis Cardinals, owners of the best record in baseball, they swept them for their first crown since 1918. Johnny Damon homered on the fourth pitch of the game, Derek Lowe made it stand up and the Red Sox won 3-0 Wednesday night, wrapping up a Series in which they never trailed.

Only 10 nights earlier, the Red Sox were just three outs from getting swept by the New York Yankees in the AL championship series before becoming the first team in baseball postseason history to overcome a 3-0 deficit.

It was Boston's sixth championship, but the only first in 86 long, seemingly agonizing years.

The Red Sox made it look easy. Gone was the heartbreak of four Game 7 losses since their last title, a drought — some insist it was a curse that really began after they sold superstar Babe Ruth to the much-reviled Yankees in 1920.

"I'm so happy. I'm happy for the fans in Boston, I'm happy for Johnny Pesky, for Bill Buckner, for Bob Stanley and Calvin Schiraldi and all the great Red Sox players who can now be remembered for the great players that they were," pitcher Curt Schilling said.

Schilling got himself traded from Arizona to Boston last November, eager to beat the Yankees and put the Red Sox in the World Series for the first time since 1986.

The win ensured him an extra $15 million US in a contract he negotiated himself.

"We wanted to do it so bad for the city of Boston," first baseman Kevin Millar said. "Rip up those '1918' posters right now!"

Damon's leadoff homer off starter Jason Marquis and Trot Nixon's two-out, two-run double on a 3-0 pitch were all Lowe needed. Lowe blanked the Cards on a mere three hits for seven innings. Even before Doug Mientkiewicz caught Foulke's toss on Edgar Renteria's grounder for the last out, the Red Sox were rushing out of the dugout.

The Sox get to raise the World Series banner April 11 at Fenway Park, with the hated Yankees in town forced to watch. But 18 Boston players are potential free agents, including Pedro Martinez and Lowe.

According to the Red Sox Website, the name "Red Sox" was adopted in 1907, not 1908. This is consistent with what I've seen in other baseball histories. Also according to the team Website, other names previously used by the team included the Puritans, the Pilgrims, and the Plymouth Rocks. The name "Red Sox" apparently commemorated the original name of Boston's first professional team, the Boston Red Stockings, which was a founding team of the National League in 1876. The Red Stockings eventually became the Boston Beaneaters and a couple of other things before becoming the Braves in 1911. It seems to have been a pattern in the new American League, founded in 1901, to name an American League team after the former name of the city's National League team. Thus the Cubs were originally the "White Stockings" and the Cardinals, originally the "Brown Stockings," inspired the name "St. Louis Browns," which later moved to Baltimore as the Orioles. For that matter, there were a couple of National League teams in Washington, D.C. in the 19th Century called the Senators and a couple of teams in Baltimore called the Orioles.
Change of name

The date has been changed.
86 Years.

86 years was indeed a long time. One of the more memorable signs that greated the Red Sox on their return to Boston from St. Louis simply said: "Our grandparents thank you, our parents thank you and we thank you!" I think that expressed the feelings of many Boston fans ---- thank you Red Sox!
Corrections

* "Hard to imagine how it could be otherwise." (It is hard to...) * "Bobby Doer" (Doerr) * "Red Sox Nation seemed heading..." (...seemed to be heading...) * And Johnny Pesky is not in the Hall of Fame. As sabr.com notes: "Johnny Pesky's career got off to an unparalleled start, and could have propelled him into the Hall of Fame had World War II not pulled three prime years out."
Login

On this day in 2004, the Boston Red Sox ended an 86-year drought and buried the "Curse of the Bambino." They won the World Series! Their sweep of the St. Louis Cardinals was almost — but not quite — anti-climactic. The pivotal battle had taken place in the American League championship against their nemesis, the New York Yankees. Down three games to none, and facing elimination, again, Boston did what no team had ever done before in baseball history. They came back to win the series 4–3. Then they took on and dispensed with the Cardinals. Jubilant Red Sox fans around the world celebrated. Three days later, an estimated 3,000,000 of them lined the parade route in Boston and cheered themselves hoarse as the victorious team passed by.

A sign on Storrow Drive in Boston had been altered: instead of "Reverse Curve," it read "Reverse the Curse." 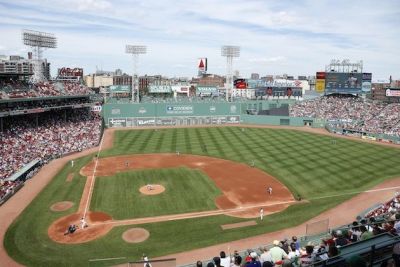 Legend has it that there are more than a few tombstones in Massachusetts bearing the words "Not in my lifetime." Season after season, these diehard fans believed their beloved Red Sox would once again be world champions. But for 86 long years, it was not to be.

In 1901 a new American League team began playing in Boston: The Boston Americans. Two years later, the fledgling American League and the more established National League pitted their two best teams against each other in the first World Series. The American League entry was the Boston Americans, led by legendary pitcher Cy Young. The National League pennant winner was the Pittsburgh Pirates. Both teams had devoted and energetic fans, known as rooters, and when Boston won the contest, it captured national attention.

In late 1907, the team adopted the name Red Sox, and in 1912 constructed a brand-new ballpark, which writer John Updike would describe as "the lyric little bandbox of a park. Everything is painted green and seems in curiously sharp focus, like the inside of an old-fashioned Easter egg." Fenway Park, built on the filled-in mudflats of Boston's Back Bay, is the oldest park in professional baseball.

"Everything is painted green and seems in curiously sharp focus, like the inside of an old-fashioned Easter egg." 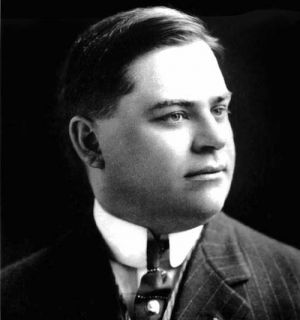 Triumphant years followed as the Red Sox won four World Series titles (1912, 1915, 1916, and 1918) in seven years. Outfielders Tris Speaker, Harry Hooper, and Duffy Lewis, and southpaw pitcher Babe Ruth created a formidable team. And then it ended. Team owner Harry Frazee, mired in debt, began to gut the team. One by one he sold his best players, let the general manager go, and then in January 1920, sold Babe Ruth (the "Bambino") to the Yankees. In the next decade, the New York team won six pennants; Boston finished last five times. That, it is said, is when the "curse of the Bambino" began.

Thomas Yawkey bought the dismal team in 1933 and slowly began to breathe life back into it. Over the years, he added talented players like Bobby Doer, Joe Cronin, Johnny Pesky, Ted Williams, Carlton Fisk — all ultimately destined for the Baseball Hall of Fame. In 1946 the Sox won the American League Championship for the first time since 1918, before losing the World Series to the Cardinals in seven games.

Dennis Eckersely, former Sox pitcher inducted into the Hall of Fame in 2004, described the team's fans as the "ultimate manic-depressive fan base."

Things seemed to be looking up in the second half of the twentieth century. During 1967, the year Red Sox fans dubbed "The Impossible Dream," the team rose from the previous year's ninth-place finish to win a tight pennant race. Carl Yastrzemski was the star, leading the team to the World Series against the Cardinals — again. And again they lost the critical seventh game.

Dennis Eckersely, former Sox pitcher inducted into the Hall of Fame in 2004, described the team's fans as the "ultimate manic-depressive fan base." It is hard to imagine how it could be otherwise. In 1975 and again in 1986 the team lost the World Series, both times in seven games. In the late 1980s and early 1990s, the Sox won one division title after another only to accumulate a losing streak of 13 post season games, which they finally snapped in 1998.

In 2002 a group of investors led by John Henry, Tom Werner, and Larry Lucchino bought the team. They hired Theo Epstein, at 28 the youngest general manager ever. In 2003 the team came close, oh so close, before losing in heartbreaking fashion to the hated Yankees.

Bumper stickers on cars and banners flying outside homes proclaimed (with a note of desperation): "We Believe."

2004. A sign on Storrow Drive in Boston had been altered: instead of "Reverse Curve," it read "Reverse the Curse." No one admitted to changing it, and the D.P.W. left it in place. Bumper stickers on cars and banners flying outside homes proclaimed (with a note of desperation): "We Believe." The Sox won the Wild Card spot in the playoffs. And then it began all over again. Red Sox Nation seemed heading for another bitter disappointment. In the third game of the American League series, New York crushed the Sox 19–8 to take a 3–0 lead. One nail-biting game followed another—3–1, 3–2, 3–3. Bleary-eyed fans shuffled into work the morning after each incredible win, exchanging tremulous smiles. Could it be? Was this the year? Indeed it was.

Once the curse was reversed, the Red Sox became regular contenders for baseball's highest honor. Only three years later, the Red Sox did it again. After coming from behind to defeat the Cleveland Indians for the American League pennant, the Red Sox swept the Colorado Rockies to win another World Series. In 2013, in the wake of the Boston Marathon bombings, the Red Sox gave the city of Boston a reason to cheer, a season capped off by yet another World Series trophy.

The First World Series and the Baseball Fanatics of 1900, by Roger I. Abrams, (Northeastern University Press, 2003).

On this day in 1960, Ted Williams thrilled the fans at Fenway by hitting a dramatic homer at his last at-bat in his 21-year career with the Boston Red Sox. A complicated man and brilliant...