The victory trot has become a walk. The nerves of steel are tattered and work hard to hold back the tears. Carl Yastrzemski came back yesterday for his special day at Fenway Park and was as appealing as he had ever been in his illustrious career. . . . With pride and humility, and just a hint of the emotion he'd kept inside all the years he toiled before the Fenway Faithful.

Yaz came home for good yesterday. No. 8 joins the numbers worn by Ted Williams (9), Joe Cronin (4) and Bobby Doerr (1) on the facade of the roof above right field. All four players are members of the Hall of Fame. All are a permanent part of Fenway Park.

There was never any question yesterday that No. 8 belonged among the others. As if on cue, the fans cast their ballots with a three-minute ovation before the ceremonies began, and never stopped cheering. . . .

"This is my home," said Yastrzemski later. "Boston. New England. I thought I was pretty calm coming in here after the Hall of Fame. But the fans at Fenway Park always amazed me. I couldn't believe that reception I received.

"…I've always had tremendous happiness coming to this ballpark," said Yaz. "The first two years were difficult for me. Wondering if I'd made the right decision or not. Never in my life did I think I'd make the Hall of Fame and have my number retired. I was competitive because of my size. I worked, and just working so hard overshadowed everything, and never gave me a chance to think about it. I never enjoyed it after a game in which I did well. I was always thinking about tomorrow.

"I remember all those years sitting at my locker, beating my head up against the wall when I did badly. Then, when I did well, I'd stop and start thinking about tomorrow, and never did cherish the great moments I had. But maybe that's why I had the ceremonies two weeks ago and today. I just never dwelled upon the success. . . . "

On this day in 1989, the Boston Red Sox retired Carl Yastrzemski's Number 8. Only 20 years old when he took over for the great Ted Williams in left field in 1961, he went on to become a legend in his own right. Yastrzemski mastered the tricky bounces from line drives hitting the Green Monster to win seven Gold Glove Awards. He was also a standout batter, revolutionizing power hitting with his unique corkscrew swing. In 1967 he won baseball's "Triple Crown," leading the league in batting average, RBI's, and home runs, something no player has done since. On October 1, 1987, he ended his 23-year career with the Red Sox in an emotional farewell before a sell-out crowd at Fenway Park.

He was such a standout that after only one year of college, he was offered a contract with the Red Sox. 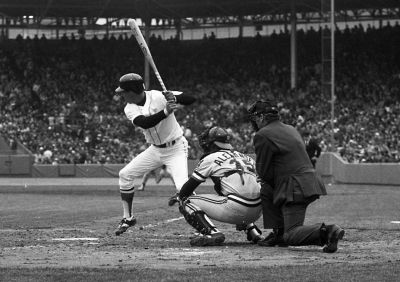 Carl Yastrzemski was born in 1939 on a potato farm in Bridgehampton, Long Island, a farm town 100 miles east of Manhattan. He and childhood friends grew up throwing and hitting tennis balls. In high school, he set records for basketball, football, and baseball. Big league scouts came to watch the teenager, but in 1957 he accepted a full scholarship to play baseball and basketball at Notre Dame.

He was such a standout that after only one year of college, he was offered a contract with the Red Sox. He started with a minor league team in Raleigh, North Carolina, where he batted .377 and won MVP and Rookie of the Year. In 1960 he moved up to the Red Sox Triple A team in Minneapolis. A year later, he stepped into Ted Williams's shoes in Fenway's left field.

The fans were prepared to be disappointed, but they were not. This was a man, one teammate recalled, who "lived, breathed, ate, and slept baseball." His reliability in patrolling the grounds in left field and his skill as a power hitter during this pitcher-dominated period in baseball rejuvenated the team. He proved to be one of the most powerful and disciplined hitters ever to play the game. With a lifetime batting average of .285 — with 1,844 RBIs, 452 HR, and 3,419 hits – he ranks among the top hitters of all time.

This was a man, one teammate recalled, who "lived, breathed, ate, and slept baseball."

He turned in one of his best performances in 1967, the year fans call "The Impossible Dream." The Red Sox had finished the 1966 season in ninth place, but the following year, the team played in one of the great pennant races in baseball history. Four teams — Baltimore, Minnesota, Detroit and Boston — were contenders to win the American League. Yaz led the Majors in Batting Average (.326), RBIs (121), and HR (44) and won that year's American League MVP and the Triple Crown. With Yaz's great hitting down the stretch, Boston made it to its first World Series since 1946 before losing to the St. Louis Cardinals in seven games.

Eight years passed before Boston won another pennant. In 1975 Yastrzemski helped the Red Sox make it back to the World Series with clutch batting against Oakland for the AL championship. In the World Series, the Sox played Pete Rose and the Cincinnati Reds. While Yaz's hitting had lost some of its power, he always played well in the post season. In the '75 Series, he batted .310 with four RBIs, helping Boston to win three games. In the winner-take-all seventh game, the Sox defense let the Reds come from behind to win it all.

The Red Sox had finished the 1966 season in ninth place, but the following year, the team played in one of the great pennant races in baseball history.

Carl Yastrzemski retired after the 1983 season, having played 3,308 games for Boston. On October 1st, "Yaz Day" at Fenway Park, he made one final "trot" around the field in front of a sellout crowd of 33,000. Ducking his head at first base, he started to cry, and went on to touch as many hands as he could.

Yastrzemski was inducted into the Baseball Hall of Fame in 1989. His plaque testifies to a career played with "graceful intensity." A few months later, he became one of only four Red Sox to have his number retired. He joined the select company of fellow Hall of Famers —Ted Williams, Joseph Cronin, and Robert Doerr. Since then, Carlton Fisk's # 27 has been added to the wall over right-field grandstand.

Fenway Park is the home of the Boston Red Sox.