On this day in 1998, 25 Bostonians, including the president of the Massachusetts Senate, a homeless man, and a fifth grade student, recited their favorite poems to a packed auditorium at the Boston Public Library. The president of the library came dressed in western attire, complete with bolo tie and hat, and read a cowboy poem. Others presented poems in Spanish, Vietnamese, and American Sign Language. The event helped launch the Favorite Poem Project, the brainchild of Boston-based poet Robert Pinsky, the 39th Poet Laureate of the United States. Over the next year, 18,000 Americans responded to Pinsky's call to share their favorite poems. Three anthologies, 50 video documentaries, and an award-winning website are the result.

. . . more than 1,000 favorite poem readings took place in communities across the country. 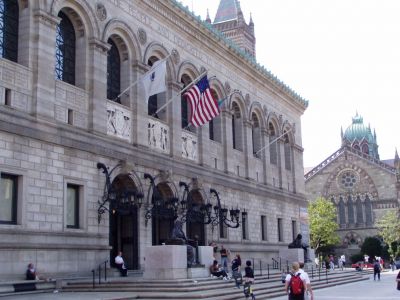 Soon after being appointed to the position of Poet Laureate in 1997, Robert Pinsky created the Favorite Poem Project to celebrate, document, and promote poetry in American life. His original plan was a modest one: one of his former students would wander around the nation's capital with a tape recorder, asking anyone who was willing to recite his or her favorite poem. But when Pinsky issued a call for people everywhere to send him their favorite poems, the project took on a life of its own.

At a White House kick-off event in April 1998, First Lady Hilary Clinton told poets gathered in the East Room "We are here . . . to celebrate the timeless power of poetry and poets as our American memory, our purveyor of insight, our eyes and ears who silence the white noise around us and express the very heart of what connects, plagues and makes us fully human."

Over the next year, the project received letters from people of all ages and walks of life — a taxi driver, glass blower, construction worker, Marine, police officer, homemaker, judge, minister — were eager to share their favorite poems. Many have been collected in anthologies published by the project, and more than 1,000 favorite poem readings took place in communities across the country.

"We are here . . . to celebrate the timeless power of poetry and poets as our American memory, . . ."

Because Robert Pinsky believes deeply that "reading a poem silently instead of saying a poem is like the difference between staring at sheet music and actually humming or playing the music on an instrument," the project has also produced short video documentaries and a DVD. In 1999 a website the Favorite Poem Project launched a website. People from across the country can be seen and heard introducing themselves, reciting their favorite poem, and explaining the role of that poem in their lives. The audio and videotapes have been added to the Archive of Recorded Poetry and Literature at the Library of Congress. However, Boston University's Howard Gotlieb Archival Research Center is the home for the Favorite Poem Project Archives. This collection includes letters, printed e-mail, raw and edited audio and video recordings, and a database of 25,000 letters written by American readers.

Pinky's project did more than encourage Americans to read and appreciate poetry, but to experience it. "One of the beautiful things about poetry," he has said, "is that the medium is the human body and its voice, but not necessarily the artist's body. When you say a poem aloud by William Shakespeare, Emily Dickinson or Langston Hughes, your voice is the artist's medium."

Boston was one of five cities chosen for the Favorite Poem Project launch, along with New York, Washington DC, St. Louis, and Los Angeles. The city's participation is a testament to Boston's (and the state of Massachusetts') contribution to literary history and to poetry in particular. The state has been the birthplace or home to some of the country's most treasured poets: Robert Frost, Emily Dickinson, Henry Wadsworth Longfellow, and E. E. Cummings, to name but a few. The City of Boston appointed its first Poet Laureate in 2008 and many other cities and towns in the state have appointed Poets Laureate as well. Like Pinsky, these local honorees work to raise awareness of poetry as an art form.

Robert Pinsky was selected Poet Laureate in part because of his commitment to making poetry accessible to a wider audience. He is the only person to have served as Poet Laureate for three consecutive terms. Born in Long Branch, New Jersey, in 1940, into what he describes as a lower-middle-class family, he was the first in his family to attend college. After graduating from Rutgers University, he earned his doctorate at Stanford.

"When you say a poem aloud by William Shakespeare, Emily Dickinson or Langston Hughes, your voice is the artist's medium."

Robert Pinsky has taught in the graduate creative writing program at Boston University since 1989. He leads a poetry workshop each semester for students in the program. He is the author of numerous books of poetry, prose, and criticism; his translation of The Inferno of Dante, which won the Los Angeles Times Book Prize, one of many awards he has received. Pinsky co-edited three books of poetry, America's Favorite Poems, Poems to Read, and An Invitation to Poetry, all of which resulted from work on the Favorite Poem Project. He is a member of the American Academy of Arts and Letters.

The Favorite Poem Project lives on at the Boston University School of Education, which holds summer poetry institutes for teachers. Elementary, middle, and high school educators have the opportunity to learn from renowned poets like Pinsky about how to read and teach poetry and about curriculum development.

All residents of Massachusetts are eligible to have a library card at the Boston Public Library.

The Library of Congress' history of the Poet Laureate.

On this day in 1963, Robert Frost died, the most popular and renowned American poet of the twentieth century. But his success was a long time in coming. It was as a student at Lawrence...

On this day in 1960, Massachusetts poet Anne Sexton had her first collection of poems published, To Bedlam and Part Way Back. Just before the manuscript was to go to press, she made major changes...

On this day in 1746, Lucy Terry Prince was among the residents of Deerfield present during an Abenaki raid on the village. Lucy, an enslaved woman, described the horrific event in "The Bars Fight," the earliest...