The blending of old and new was typified today in the opening of the first stage of the long awaited Faneuil Hall marketplace project. The area, called Dock Square, was the city's marketplace from its beginning, where the ships unloaded their cargo and the farmers brought their produce.

. . .The effect is carefully calibrated to appeal largely to the young and the affluent who characterize the downtown area and whom the city needs to survive – a kind of Bloomingdales sensitivity prevails. The shops will be like the kind now found among the Back Bay boutiques, at Harvard Square and in the shopping mall in suburban Chestnut Hill.

. . . The day was a kind of celebration of the city. . . . When Mayor Kevin White was asked about protection from purse snatchers, he snapped: "If you are worried about handbag snatchers, you can live in the Berkshires!"

. . . Bagpipers wailed, steel bands played on, and actors dressed up as vegetables. Harry J. McCue, whose family has sold vegetables at the marketplace for 40 years, looked at the crowds happily and said, "It's the city, it's the people's place."

It says here that by January 1824 Mayor Quincy had won approval for his plans from Town Meeting. Now, how can that be, since Boston became a city in 1822 (that's why there was a mayor instead of selectmen), which means that there was no longer a town meeting.
A nitpick

Another nitpick: It says "Boston celebrated the grand opening of Fanueil Hall . . .", but that's not true. As the name of the day's topic says, it was Quincy Market that opened that day, not Fanueil Hall, which already existed. According to Wikipedia, in regards to Fanueil Hall: "The hall burned down in 1761, but was rebuilt in 1762. In 1806, the hall was greatly expanded by Charles Bulfinch, doubling its height and width and adding a third floor. The building was entirely rebuilt in 1898ý1899, of noncombustible materials." ------------------------- Tim Quincy-by-the-Sea
Erie Canal

Those are corrections! Cities don't have Town Meetings. The Erie Canal was probably a bigger undertaking. Faneuil Hall did not open in 1826. In fairness, the line about the opening date ("In 1826, Boston celebrated the grand opening of the Faneuil Hall, commonly known as Quincy Marketplace) seems to be missing "market" after "Fanueil Hall," making it more of a typo than a historical error--assuming the reference is to the new market. (Though just when was it "commonly known" as "Quincy Marketplace," or "Quincy's Market" for that matter? It was, in fact, as a Boston Landmarks Commission report notes, officially called "Faneuil Hall Market," and colloquially known as "Quincy Market.") In any case, the fact that the corrections have been ignored (in this and other essays) does not reflect well on the Massachusetts Foundation for the Humanities and the people responsible for maintaining this public education resource. Now if you want nitpicking, you could say that it's not true that "when Puritans first settled Boston, the site of today's Faneuil Hall was a bustling center of activity."
Architect Alexander Parris

Two years later, in 1828 the First Parish Church in Quincy would be dedicated. Built also of Quincy Granite - Alexander Parris was also the architect. Today it's known as The Church of the Presidents. The Adams most often called it The Stone Temple. It's open to visitors with guided tours every day though the summer. It's an opportunity to visit the graves of two dead presidents. ------------------------- Jim Cooke
Login

On this day in 1826, Boston celebrated the grand opening of the Faneuil Hall, commonly known as Quincy Marketplace. Located on the site that had long served as Boston's public market, the three massive buildings dominated the harbor and were hailed as a sign of the city's prosperity and civic pride. Yet only two years earlier, Bostonians had derided Mayor Josiah Quincy's huge construction project — the largest public works project yet undertaken in the new nation — as "Quincy's Folly." Once complete, the market was such a success that it was dubbed "Quincy's Market" in honor of the mayor who had been so determined to build it. Exactly 150 years later to the day, Mayor Kevin White would preside over the grand re-opening of the newly revitalized market.

In the 1970s, Mayor Kevin White spearheaded a two-year project to revitalize the market. It re-opened on August 26, 1976, during the celebration of the nation's Bicentennial. 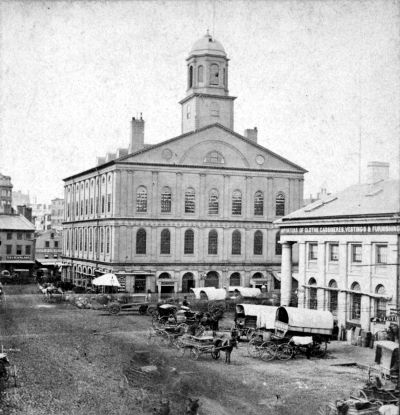 When Puritans first settled Boston, the site of today's Faneuil Hall was a bustling center of activity. Ships unloaded passengers and cargo at the Town Dock. Public gatherings and meetings were often held in the buildings around the wharf, and a nearby field served as an open-air marketplace where farmers, fishermen, and traders sold their goods from wagons or stalls. In 1658 a Town House was built nearby to accommodate public gatherings, court sessions, a library, and a merchants' exchange.

The Town House was a success, but it took nearly a century of heated debate before a permanent, public market was constructed. Arguing that it was British custom for town officials to regulate prices, check weights and measures, inspect for cleanliness, and settle disputes among traders, wealthy merchants favored restricting trade to an enclosed public marketplace like the ones in New York and Philadelphia.

But the middle and lower classes did not agree. They were certain they could get better prices if they bought from peddlers and hucksters selling door-to-door. They strongly suspected that the government in London and merchants in Boston would fix prices and impose taxes to their own advantage. The disagreement persisted for years.

Public gatherings and meetings were often held in the buildings around the wharf, and a nearby field served as an open-air marketplace where farmers, fishermen, and traders sold their goods from wagons or stalls. 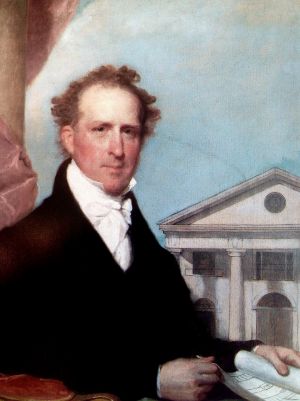 In the 1730s, the merchants were allowed to construct public market stalls, but the general population refused to use them. They were destroyed by rioters in 1737. Three years later, slave trader and West India merchant Peter Faneuil donated funds to build a new Town House that would have a market on the ground floor. Completed in 1742, Faneuil Hall became a hub of civic activity, but it was used only intermittently as a marketplace.

In 1822, Boston acquired the status of a city; it also had the problems of one. Infrastructure and services had not grown as fast as the population; household garbage, animal waste, and raw sewage mingled in the streets, while the harbor smelled horribly of "noxious effluvia." Mayor Josiah Quincy vowed to improve conditions.

He ordered a major cleanup of the streets and sewers; he then restricted all livestock (except horses) to Market Square. Given the numbers of fowl, swine, and cattle that would now be concentrated in the district, it would need a complete overhaul. He proposed that the city acquire all of the property between Faneuil Hall and the harbor, expand the waterfront by filling it in, widen the streets, and build three large granite buildings to house stalls, stores, and warehouses.

Infrastructure and services had not grown as fast as the population; household garbage, animal waste, and raw sewage mingled in the streets, while the harbor smelled horribly of "noxious effluvia."

From the beginning, the mayor faced stiff resistance. Many opposed the plan because of longstanding concerns about government regulation of trade. Some insisted the project was too expensive. Others felt that such an ambitious engineering and architectural project was better left to private enterprise. A few landowners simply refused to sell their property to the city.

But Josiah Quincy used his considerable powers of persuasion to wear down the opposition. By January of 1824, he had won approval from town meeting. For two years, Quincy was consumed with the project — overseeing engineers, engaging architect Alexander Parris, and negotiating with quarries for the granite and marble that would be needed for the massive buildings.

At the grand opening in late August 1826, crowds gathered to hear the bell that would signify the opening of what one local merchant called "the market of all markets on the globe." According to one newspaper, the new market "was thronged from morning till night, and many visitors from other parts of the Union expressed much gratification in witnessing the extent and arrangement of this noble institution."

According to one newspaper, the new market "was thronged from morning till night, and many visitors from other parts of the Union expressed much gratification in witnessing the extent and arrangement of this noble institution."

At first the "noble institution" prospered, but by the 1860s the city had grown too large for one market, and markets in other parts of town began to compete with Faneuil Hall Market, as Quincy's Market was officially known. The Great Fire of 1872 spared Quincy's Market but destroyed most of downtown Boston. Much of the rebuilding took place away from the waterfront; this together with increasing use of rail transport drew commerce away from the aging market.

By the turn of the century, Quincy's Market had lost almost all of its retail trade; it was occupied mainly by fruit and vegetable wholesalers, seed stores, and warehouses. With each passing decade, the area became more and more dilapidated.

In the 1970s, Mayor Kevin White spearheaded a two-year project to revitalize the market. It re-opened on August 26, 1976, during the celebration of the nation's Bicentennial. With the handsome granite buildings restored and adapted for new uses, Quincy Market became one of the region's most popular tourist destinations as well as the model for similar projects in other American cities.

On this day in 1825, a Boston newspaper carried a notice seeking 9,000 tons of "the best Quincy granite" for the Bunker Hill Monument. This marked the beginning of the granite industry in Quincy. For...