Proposals will be received for furnishing the granite for an obelisk to be erected in Bunker Hill. The quantity required will be about 9,000 tons, and must be delivered at the prison in Charlestown or at a wharf near the navy yard, as may be required. The dimensions of the blocks to be about 2 feet 6 inches wide and 12 feet long. The granite for the foundation may be of a coarse kind, and it will require about 1,400 tons. The outside curves of the obelisk must be of the best Quincy granite, of uniform color, of which about 2,600 tons will be required. Proposals will be received for Chelmsford granite for the outer courses. Those who estimate may furnish any quantity to suit their convenience."

Quoted in History of the Granite Industry of New England, by Arthur W. Brayley (National Association of Granite Industries of the United States, 1913)

"Igneous rock was crystallized into granite." - I'm no geologist, but granite IS an igneous rock. It is formed from cooled magma.
Login

On this day in 1825, a Boston newspaper carried a notice seeking 9,000 tons of "the best Quincy granite" for the Bunker Hill Monument. This marked the beginning of the granite industry in Quincy. For the next 130 years, quarries in the South Shore town would provide much of the raw material that transformed Boston from a settlement of wood and brick into an impressive city of monumental stone structures. The industry also transformed Quincy. The quiet agricultural and fishing village grew into a small metropolis. Mined by stoneworkers from Italy, Scandinavia, and the Sudan, Quincy granite was exported around the country and the world. The introduction of reinforced concrete in the mid-twentieth century brought an end to Quincy's reign as the "Granite City."

In 1826 railway pioneer Gridley Bryant designed and built a three-mile track to move the granite from the quarry to the Neponset River. It was the first railway in the nation. 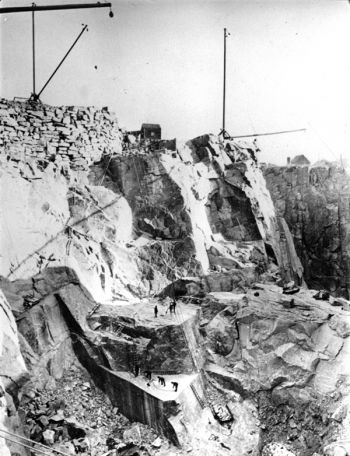 Quincy's story is, quite literally, "as old as the hills." Deep in the geologic past, as continents collided, mountains rose up and were folded; under intense pressure, igneous rock was crystallized into granite. The gray stone ledges that eventually emerged in Quincy after millennia of erosion contained some of the highest quality granite in the world, prized for its hardness and durability.

Recognizing the value of the granite rocks that littered the town, the English colonists used them for foundations, wharves, doorsteps, and stone walls. As early as 1721, nearby Braintree voted in town meeting to fine anyone who carried stones off the common land. It was a remarkable bit of legislation for New England, where rocks were generally considered the most predictable, and most expendable, annual crop.

The stone was rarely used in colonial buildings. Collecting the rocks and finishing the edges took too much time and money. In spite of the constant threat of fire and the passage of laws requiring brick and stone buildings, most colonial structures were made of wood. One exception was King's Chapel, constructed in 1754 of granite boulders dug up in Quincy, split and hammered, and transported to Boston. When the church was completed, "it was the wonder of the country round. People coming from a distance made it an object to see and admire this great structure."

When the church was completed, "it was the wonder of the country round. People coming from a distance made it an object to see and admire this great structure." 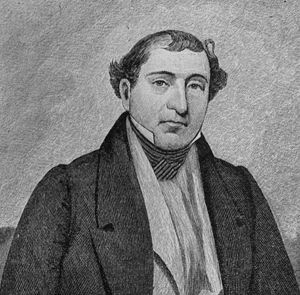 Things began to change around 1800 with the introduction of a new way to cut stone. Traditionally, granite was harvested by using explosives to blast open a ledge and then painstakingly gathering pieces of rubble by hand. In the early 1800s, Lt. Governor Edward Hutchinson Robbins discovered a stonecutter in Danvers by the name of Tarbox who had come up with a new way to split stone. His technique was to drill regular holes and then drive small wedges into them until the rock split cleanly. Robbins immediately took the stonecutter to Quincy and put him to work teaching his quick and cost-effective method to the workers there. Soon, the price of granite dropped dramatically and its use in construction soared.

For Quincy, the real turning point came 25 years later, when Quincy granite was selected for the Bunker Hill Monument in Charlestown. Plans called for extremely large blocks of granite. The construction supervisor walked 300 miles to examine granite quarries before concluding that the best and strongest stone available was in Quincy, only 12 miles away. The monument committee purchased a Quincy quarry in November of 1825, and the project began.

Especially in Boston, wealthy people saw granite as the material that best embodied their desire for beauty, permanence, and grandeur; they began demanding that their homes and public buildings be built of granite.

As the monument took shape, granite rapidly gained in popularity as a building material. It was the age of Greek Revival architecture, and granite was perfectly suited to the look of the classical temple. Especially in Boston, wealthy people saw granite as the material that best embodied their desire for beauty, permanence, and grandeur; they began demanding that their homes and public buildings be built of granite. Many of these monumental structures, such as Quincy's Market, Charlestown Navy Yard, Massachusetts General Hospital, and the Boston Custom House stand as reminders of Boston's "stone age."

During the heyday of the industry in the mid- to late-1800s, immigrants from Scandinavia, the British Isles, and the Middle East came to work in the Quincy quarries.

Over the next 50 years, dozens of quarries opened in Quincy, supplying granite for a building boom that stretched from New York to New Orleans. During the heyday of the industry in the mid- to late-1800s, immigrants from Scandinavia, the British Isles, and the Middle East came to work in the Quincy quarries. Many brought or acquired expertise that would provide Quincy with a wealth of skilled labor. They also shaped and enriched the character of Quincy's neighborhoods.

The demand for Quincy granite began to wane in the twentieth century, as building styles changed and builders chose more affordable materials. As the town's economy shifted from quarrying to shipbuilding, it benefited from the innovative transportation technologies and skilled labor base that the granite industry had developed. After World War II, the use of concrete as a cheap substitute for quarried stone doomed the remaining granite operations. The last quarry in Quincy closed in 1963. In 1985 the Commonwealth of Massachusetts purchased 22 acres of abandoned quarry including the original Granite Railway Quarry. Today, the site is a popular destination for rock climbing, hiking, and scenic viewing.