The U.S.S. Long Beach, first nuclear-powered naval surface ship, slid down the ways at 4:10 p.m. at Bethlehem Steel’s Quincy Shipyard yesterday to usher in a new era in control of the seas.

It is highly significant that the Long Beach’s first commanding officer will be Capt. Eugene P. Wilkinson, U.S.N., who guided the Nautilus, the nation’s first atomic submarine.

Harold S. Vance of the Atomic Energy Commission, principal speaker at the christening exercise, preceding the actual launching, pointed out that this cruiser is the forerunner of an entirely new group of Navy craft.

The Long Beach, Vance declared, “will pave the way for the nuclear-powered air-craft carrier, the Enterprise, being built at Newport News and the nuclear-powered guided missile destroyer leader, he Bainbridge, whose keel was laid recently at this Bethlehem yard.

The fast moving chain of events in less than five years since the Nautilus amazed military leaders was stressed by the AEC representative, who spoke before 10,000 persons:

“In that brief period the Atomic Energy Commission, in cooperation with the Navy, has developed or has under development eight different types of nuclear propulsion plants designed to power many types of submarines and surface vessels.

“They range from a plant to drive the small hunter-killer submarine, the tullibeee, up to the Enterprise, powered by eight reactors.

“I doubt that many scientific fields have seen as intense a development effort over so short a period of time.”

The Long Beach, 14,000 tons and 721 feet long, will be armed with both Talos and Terrier guided missiles, the first Navy ship so armed; will cost an estimated $250 million and is scheduled to be completed late next year.

Following the Quincy Yard christening ceremonies, the notables adjourned to the Neighborhood Club, on Glendale rd. where luncheon was followed by afternoon speaking, with Samuel Wakeman, general manager of the Boston district, Bethlehem Steel Shipbuilding division, as toastmaster. . . .

Thank you for bringing us moments of history, we noticed that today featured the Fore River Shipyard in Quincy. For further information, as another link you may want to visit our Digitizing Historical Resources project, "Quincy's Shipbuilding Heritage" Take a look, but also look at one on the "Links" from that page on the history of the Fore River Yard. Thomas Crane Public Library
Watson and electricity

A reader has submitted these comments: "Watson may have been interested in electricity but he started his company to build an experimental rotary steam engine. Thereafter, his company built conventional steam engines. Electric motors in the 1880s were not up to the task of propelling ships. Besides which, where would the electricity come from? I don't have time to research this in detail this morning but two glimpes of the state of the art are provided at : Braintree Electric Lighting Dept.'s website The Spark Museum" Mass Moments staff will make the appropriate changes soon; thanks to our watchful readership!
Login

On this day in 1959, the nation's first nuclear-powered cruiser was launched from Fore River Shipyard in Quincy. With its deep and sheltered harbor, Quincy was an ideal site for shipbuilding. Men had been building and launching boats there since the English first settled in the area in 1640. But the industry really boomed in the late nineteenth century when inventor Thomas Watson started a company to make engines for boats. For the next 100 years, life in Quincy revolved around the shipyards, which reached their peak during World War II when employment topped 32,000, including 1,200 women. Although the yard closed in 1986, Quincy's shipbuilding heritage is kept alive by the U.S. Naval and Shipbuilding Museum on the Fore River site. 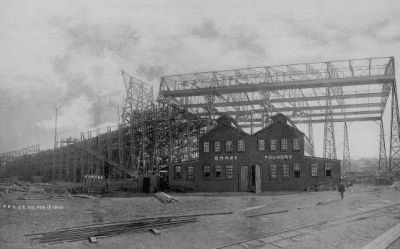 The city of Quincy, seven miles south of Boston, has 27 miles of shoreline, most of which is ideally suited for shipbuilding. With deep-water channels and tides that average between 24 and 30 feet, Quincy can accommodate large vessels. Colonists began building ships there in the seventeenth century. The first recorded launch of a vessel was the ketch Unity, at Ship Cove in 1696.

Quincy had natural advantages for shipbuilding, but the town had another asset that dominated its economy in the eighteenth and nineteenth centuries — granite quarries. But by the late 1800s, the quarries were nearly exhausted, and the town returned to its shipbuilding roots. Thanks to the granite industry, Quincy had in place an excellent transport system, deep-water docks, and a skilled labor force.

And it had a wealthy inventor living nearby. In 1883 Thomas Watson, Alexander Graham Bell's trusted assistant, had taken his profits from the Bell Telephone Company and purchased a farm along the East Braintree shoreline. There he experimented with all sorts of devices. Watson hired mechanic Frank Wellington to work with him, and the two men began designing engines for yachts and tugboats. In 1884 they formed the Fore River Engine Company.

Thanks to the granite industry, Quincy had in place an excellent transport system, deep-water docks, and a skilled labor force.

Their first products were engines for passenger steamships. Orders poured in, and 20 to 30 men were soon at work in a newly built engine shop on Watson's farm. They soon made what Watson later called "a momentous decision" — they began building not just engines, but the ships themselves. The result would be "one of the largest shipbuilding establishments in the country."

History handed the company an opportunity in February of 1898, when the battleship Maine was blown up in Havana harbor, and the U.S. went to war with Spain. Congress immediately authorized the construction of 16 torpedo boat destroyers. The contract for two of them went to Fore River, the first of many contracts the shipyard would get from the U.S. Navy in the next 100 years. These ships were so large that the plant moved from East Braintree to Quincy Point, where it could take advantage of the transportation infrastructure and labor force the granite industry had left behind.

In 1913 the giant Bethlehem Steel Corporation bought the shipyard. Now known as Bethlehem Fore River, the company ramped up production as WW I began in Europe. Bethlehem built a second yard in neighboring Squantum. During WW I, the two yards built 71 destroyers — more than the output of all other U.S. shipyards combined. The shipyard was constantly busy, and the forge, the largest in the U.S. at the time, ran 24 hours a day, turning out nickel steel.

During WW I, the two yards built 71 destroyers — more than the output of all other U.S. shipyards combined.

In the 1920s and 1930s, Fore River produced merchant vessels and a few warships, but the shipyard's most intense period came with WW II. The people of Quincy took tremendous pride in the shipyard's contribution to the war effort, and the contribution was remarkable indeed. From 1941 to 1943, Bethlehem's Quincy operation produced 88 ships of 11 different types. On average, some form of vessel was launched once every 12 days. Because of its high rate of production, Quincy was widely considered the greatest shipyard in World War II.

Demand fell off in the post-war years. The Fore River managers tried to make up the difference by introducing such innovations as the first liquid chemical tanker. They also laid plans for another shipbuilding "first" — a nuclear-propelled surface warship, and in 1953 they won the contract for a nuclear guided missile cruiser. After six years of controversy over costs and safety issues, the ship was completed and launched in 1959.

Five years later, the shipyard changed hands again. The new owner was the General Dynamics Corporation, the world leader in nuclear-powered engines; now Fore River specialized in liquid natural gas tankers. But by 1986, competition from abroad had reduced the number of new ship orders to the point where the operation was no longer profitable, and the yard was closed. An effort to revive it in the 1990s ended in disappointment. Today the site is home to the Quincy-built Salem, the centerpiece of the U.S. Naval and Shipbuilding Museum.

They also laid plans for another shipbuilding "first" — a nuclear-propelled surface warship, and in 1953 they won the contract for a nuclear guided missile cruiser.

Historic Quincy, Mass., by William Churchill Edwards (published by the City of Quincy, 1957).

On this day in 1825, a Boston newspaper carried a notice seeking 9,000 tons of "the best Quincy granite" for the Bunker Hill Monument. This marked the beginning of the granite industry in Quincy. For...