Under circumstances as dramatic as any in fiction or in a movie epic, the town of Enfield passed out of existence at the final stroke of the midnight hour.

A hush fell over the Town Hall, jammed far beyond its ordinary capacity, as the first note of the clock sounded; a nervous tension growing throughout the evening had been felt by both present and former residents and casual onlookers.

The orchestra, which had been playing for the firemen's ball throughout the evening, faintly sounded the strain of Auld Lang Syne…muffled sounds of sobbing were heard, hardened men were not ashamed to take out their handkerchiefs.

I respectfully take issue with the statement that stories of peaks of building being seen are just that, stories. As a teenager in the 1950's I recall a picture in the Boston Globe of a church steeple potruding from the waters of the Quabbin during a period of drout. The ensuing quote from Wikipedia will reinforce this obsrvation: "When the buildings in the towns flooded by the reservoir were destroyed, the cellars were left intact. The remnants of the buildings and roads can occasionally be seen when the water level is low, and old roads that once led to the flooded towns can be followed to the water's edge." Either all the building were not completely destroyed or so-called remnants such as a church steeple were left behind when the area was cleaned out.
Login

On this day in 1946, water flowed over the spillway and officials declared Quabbin Reservoir full. Construction took more than 20 years and required the obliteration of four towns in the Swift River Valley. More than a thousand structures were dismantled — homes, barns, churches, schools, stores. Workers painstakingly removed 7,613 graves and re-interred the dead in a new cemetery. When it was completed, Quabbin was the largest man-made reservoir in the world. Today it is the principal source of drinking water for people in 46 metropolitan Boston communities. To ensure the quality of the water, the state has protected over 56,000 acres of surrounding land. The result is one of the largest and most diverse wilderness areas in Massachusetts.

It took seven years for the reservoir to reach its capacity of 412 billion gallons. 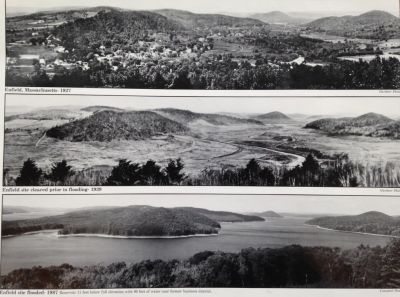 Early in the twentieth century, state officials worried that demand for water in the fast-growing Boston area would soon exceed the capacity of existing reservoirs. Searching for a site on which to create a new reservoir, planners settled on the Swift River Valley. It was, from their point of view, perfect.

Three branches of the Swift River fed the valley, which was surrounded by low hills. Dam the river and the smaller Beaver Brook, and the result would be an enormous lake. There was no major industry in the area; no highways passed through; no landmarks stood in the way. However, there were four small towns — Dana, Enfield, Greenwich, and Prescott — in the Swift River Valley. The 2,500 inhabitants had no choice but to accept the price of progress.

In 1926 the immense engineering project began. A tunnel was built between the Swift River and Wachusett Reservoir to the east, and the river was diverted. In 1933 ground was broken for Goodnough Dike and Winsor Dam at what is now the southern end of the reservoir. Six years later, both were finished. As the final stages of construction were taking place, so too were the steps to dismantle the towns.

Once home to the Nipmuc people, who called it "Qaben," meaning "meeting of the waters" . . .

In the late seventeenth century, colonial authorities had granted land in the valley to veterans of King Philip's War. Once home to the Nipmuc people, who called it "Qaben," meaning "meeting of the waters," the valley filled up with colonial farmers. Four towns were incorporated: Greenwich in 1754, Dana in 1801, Enfield in 1816, and Prescott in 1822.

Along with farming, the valley supported a variety of small industries. The river was dammed to power gristmills and factories that produced straw bonnets, soapstone fixtures, and piano legs. When the railroad arrived in 1873, seasonal visitors began to occupy the local hotels while enjoying the quiet valley.

Then rumors about the planned reservoir reached the valley; real estate values fell and businesses closed. The state acquired 80,443 acres by eminent domain, and the slow, painful process of removing the towns began. On April 28, 1938, the state declared the towns officially "discontinued."

. . . the land has reverted to wilderness, a habitat shared by coyotes, foxes, fishers, and wildcats and hundreds of bird species, including loons and bald eagles.

In July 1939 engineers stopped diverting the Swift River and allowed it to back up, slowly flooding the valley. It took seven years for the reservoir to reach its capacity of 412 billion gallons. Miles of aqueducts began carrying water from what some nostalgically call the "lost valley" to faucets in the Boston area.

More than 8,000,000 seedlings were planted to protect the watershed. Quabbin Park — 3,200 acres criss-crossed by 22 miles of trails — opened to the public in 1945. From the top of an 84-foot lookout tower, visitors can see New Hampshire, Connecticut, and Mt. Greylock, the highest peak in Massachusetts. The tower also offers stunning views of the 18-mile-long Quabbin Reservoir, many of its 60 islands, and thousands of acres of "accidental wilderness" that surround it.

With the exception of 12 miles of paved roads, Quabbin's land is accessible only on foot. Camping is prohibited. While almost all of the park is open to the public, few visitors venture deep into the woods. As a result, the land has reverted to wilderness, a habitat shared by coyotes, foxes, fishers, and wildcats and hundreds of bird species, including loons and bald eagles.

Stories of church steeples emerging from the reservoir when the water level drops are just that — stories.

The area provides bald eagles with excellent winter feeding; the first one was sighted there in 1948. In the 1980s wildlife biologists introduced more eagles. By the end of the decade, the raptors began to nest at Quabbin. The record count is 42 eagles in one season.

The reservoir itself is a fisherman's paradise. Only rowboats, canoes, and boats with small outboard motors are permitted. Quabbin is one of the best places in the region for lake trout. Bass, perch, and pickerel are abundant, too.

Stories of church steeples emerging from the reservoir when the water level drops are just that — stories. The valley floor was burned before the first gallon of water flowed in. However a few spots were higher than the top of the reservoir. One can hike to what was once the center of North Dana along the remnants of a road that not so long ago connected one Swift River Valley town to another.

Quabbin's main entrance and Visitor's Center are on Route 9 in Belchertown.

The University of Massachusetts Amherst Special Collections and University Archives has several collections related to the Quabbin Reservoir and the four towns that were "discontinued" to make room for the reservoir:

On this day in 1946, an airplane flew over Mount Greylock in western Massachusetts and seeded the clouds with super-cooled ice crystals. The first-ever artificially-produced snow melted before it hit the slopes below, but the...