A well known citizen of Boston, left his residence No. 8 Walnut Street on Friday last, he is 60 years of age; - about 5 feet 9 inches high – grey hair- thin face – with a scar under his chin – light complexion – and usually walks very fast. He was dressed in a dark frock coat, dark pantaloons, purple silk vest, with dark figured black stock and black hat.

As he may have wandered from home in consequence of some sudden aberration of mind, being perfectly well when he left the house; or, as he had with him a large sum of money, he may have been foully dealt with. The above reward will be paid for information which will lead to his discovery if alive; or for the detection and conviction of the perpetrators if any injury may have been done to him. A suitable reward will be paid for the discovery of his body.

Information may be given to the City Marshal

Interested readers should read a wonderful book by the late Robert Sullivan, a justice of the Superior Court. It is entitled "The Disappearance of Dr. Parkman." In addition to the story of the murder and trial, the book recounts the history of the famous Massachusetts Jury Instruction on proof beyond a reasonable doubt that stems from Chief Justice Lemuel Shaw's jury charge in the case. It is known as the "Webster Charge" and, in a somewhat modified form, is the same instruction used by Massachusetts judges today in every criminal case. Murder trials at the time of this case were conducted by the justices of the Supreme Judicial Court. It was not until the first decade of the 20th century that a single justice of the Superior Court was given authority to try capital cases. ------------------------- Peter W. Agnes, Jr.
Forthcoming book.

Granted the case was decided on circumstantial evidence and in spite of the fact Dr. Webster eventually confessed, two modern theorist have an alternative view of the murder and Webster's innocence. Apparently James and Lois Cowan, husband and wife, are in the process of writing a book due out in the spring of 2009. The title will be, "The Gentleman in the Purple Waistcoat". I gather the thrust of their argument rest on testimony given by seven witnesses who claim they had seen Dr. Parkman after the time he was supposedly murdered. To counter this testimony the prosecution argued the witnesses had seen a man who looked like Parkman. The man in question was from Springfield, MA, and his name was George Bliss. Although Bliss, nor anyone else, was never called to testify as to Bliss' whereabouts at the time the jury bought the prosecution's case. The book should be an interesting read.
Forthcoming book.

Sounds great! I love all kinds of mysteries, but especially the creepy old murder-amid-candlelight-and-cobblestones type. And this is a real one ... yummy; can't wait to read it!
Forthcoming book.

Check out the story at www.whokilledparkman.com
Login

On this day in 1849, Dr. George Parkman, scion of one of the city's oldest and wealthiest families, disappeared. Several thousand broadsides were distributed seeking information on his whereabouts, but no one reported having seen him since the day after Thanksgiving. While the police and press looked for leads, Ephraim Littlefield went underground — literally — in search of Dr. Parkman. A janitor at Harvard Medical School, Littlefield later said that he had reasons to suspect Professor Webster, who taught chemistry at the medical school. Parkman was last seen entering Harvard Medical School, where it was presumed he went to collect money Webster owed him. Littlefield's discovery of Parkman's body in the Harvard Medical School's cellar ultimately led to the arrest, conviction, and hanging of John Webster.

Prosecutors established the victim's identity with dental records, one of the first times forensic evidence was used in a criminal trial. 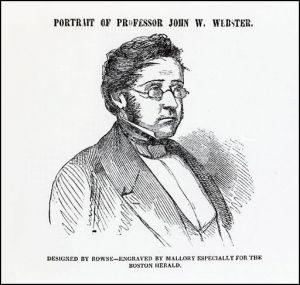 In the spring of 1850, Boston was the scene of a murder trial so macabre that reporters came from as far away as London, Paris, and Berlin. Visitors pressed for admission to the courtroom in such numbers that groups were rotated through in ten-minute shifts. By the end of the 12-day trial, more than 60,000 people had observed the drama firsthand.

The trial dealt with a grisly murder and dismemberment on the campus of Harvard Medical School. As if that were not sensational enough, it involved men who belonged to the elite of Boston society. Dr. George Parkman, scion of one of the city's oldest and wealthiest families, had disappeared. Within a week, John Webster, a professor at the medical school, was charged with his grisly murder.

When Parkman first disappeared, the leading theory was that he had been robbed and murdered by Irish immigrants, who had been flooding into Boston since the potato famine devastated Ireland in the mid-1840s. Several thousand broadsides were distributed seeking information on his whereabouts, but no one reported having seen him since the day after Thanksgiving.

Parkman was last seen entering Harvard Medical School, where it was presumed he went to collect money Webster owed him. 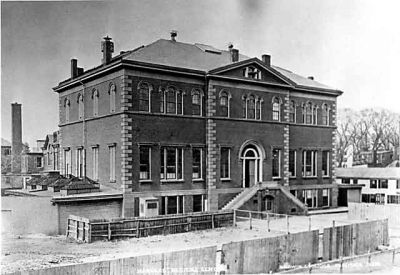 While the police and press looked for leads, Ephraim Littlefield went underground — literally — in search of Dr. Parkman. A janitor at Harvard Medical School, Littlefield later said that he had reasons to suspect Professor Webster, who taught chemistry at the medical school. Parkman was last seen entering Harvard Medical School, where it was presumed he went to collect money Webster owed him.

Littlefield had witnessed an argument between the two, and he noticed Webster's odd behavior after Parkman's disappearance. The professor had begun to keep his doors locked and a fire constantly burning in his laboratory. Littlefield decided to take his investigation further. Working from a crawl space under Webster's rooms, he spent several evenings digging and then chiseling his way into Webster's private privy. There, he made a gruesome discovery: parts of a body that he surmised belonged to George Parkman.

Littlefield took his discovery to the police, who proceeded to arrest John Webster for the murder of George Parkman. When the story broke, the city was horrified and fascinated. The press reported every gory detail.

"I trust our minds will be soon relieved, but, meanwhile, they are soiled by new details continually."

The motive appeared to be money. Webster owed many people money, including Parkman, who had recently been publicly hounding the professor for payment. George Parkman was known as a charitable man, but he was also known to be intolerant of men who did not pay their debts. Webster, on the other hand, was a genial, affable soul, who habitually overspent his small teaching salary. The police, press, and public opinion all came to the same conclusion: Webster had killed Parkman out of a desire to be free of his humiliating debt.

George Parkman's murder was tragic, and the fact that a Harvard doctor of previously unblemished character was the leading suspect caused further anguish among the Boston elite. Fanny Longfellow, wife of the poet, wrote to a friend, "You will see by the papers what dark horror overshadows us like an eclipse. Of course we cannot believe Dr. Webster guilty, bad as the evidence looks. . . . Many suspect the janitor, who is known to be a bad man and to have wished for the reward offered for Dr. Parkman's body. . . . I trust our minds will be soon relieved, but, meanwhile, they are soiled by new details continually."

. . . to render a guilty verdict based on circumstantial evidence it needed to be certain "beyond a reasonable doubt."

The trial began on March 19, 1850. Prosecutors established the victim's identity with dental records, one of the first times forensic evidence was used in a criminal trial. The jury heard a graphic description of the dismembered corpse. The defense suggested that Littlefield was untrustworthy, but the janitor's testimony was straightforward and convincing.

In the end, the evidence was largely circumstantial. The presiding judge set a legal precedent when he instructed the jury that to render a guilty verdict based on circumstantial evidence it needed to be certain "beyond a reasonable doubt." The jury found John Webster guilty, and he was sentenced to hang.

As Webster awaited his execution, he prepared a full confession, insisting that he struck Parkman in an unpremeditated rage when the doctor verbally abused and defamed him. In spite of an outpouring of mail from across the country begging the governor to pardon him, John Webster was hanged.

Walking Cinema: Murder on Beacon Hill is a mobile app that offers users the a walking tour/movie experience. Parkman's home was located at 8 Walnut Street on Beacon Hill and the Harvard Medical School was located on North Grove Street near the MGH Bullfinch Building at the time of the murder.