A US District Court judge in Boston ruled that Eastman Kodak Co. infringed on seven Polaroid patents that are key to instant photography, Polaroid's core business. The decision closes at least one chapter in a nine-year legal battle between the two photography giants.

Judge Rya Zobel, who heard the case without a jury, still must determine whether to award damages or other remedies to Polaroid. She set no date for that decision.

One analyst predicted an award of $30 million to $40 million.

. . . Kodak entered the instant photography market in 1976, ending Polaroid's 28-year monopoly, which resulted from an impenetrable patent wall built by its lawyers and based on work by Land and his colleagues.

. . .Yesterday's decision was a personal victory for Land, who invented instant photography and spent his life building Polaroid into one of the hottest glamour companies of the 1960s and 1970s. Several of the patents involved in yesterday's decision were Land's.

Land acknowledged he was pleased and then some. "I'm thrilled," he said from his office at the Rowland Institute for Science in Cambridge, which he founded. "We worked so hard the first time around on the contents of the film and the camera and the patents on it. And we worked very hard trying to make clear to the court what the essence of every invention was."

Given that he was born in 1909, I was expecting to see something about when Dr. Land died. Since there's no mention, are we to assume that he's still alive? If so, he would be in his late 90s now.
Is Dr. Land still alive?

Seems to me that should have been mentioned in the article.
Login

On this day in 1985, Polaroid won a huge victory in federal court. A judge ruled that Kodak had violated Polaroid's patents for instant photography. The decision ended a nine-year legal struggle between the two photography giants. The first instant camera went on sale at Jordan Marsh in downtown Boston in 1948; it was an immediate success. Edwin Land, the brilliant Harvard dropout who founded Polaroid in 1937, hired other young scientists to help develop the technology. They continued to improve the optics, chemistry, and design of the cameras. For nearly 50 years, Polaroid built and dominated a worldwide market for instant photography. But digital photography dealt the company a blow from which it could not recover. In 2001, it filed for bankruptcy.

Land received more than 500 patents, making him second only to Thomas Edison. 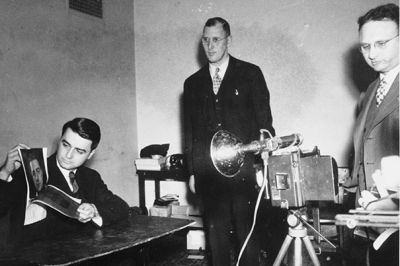 Edwin Land was born in 1909 in Bridgeport, Connecticut, the son of Jewish immigrants from the Ukraine. His parents were prosperous enough to send him to Harvard. Arriving in Cambridge in 1926, he proceeded to spend most of his time trying to create an artificial light polarizer. He knew that light traveled in waves, radiating out in all directions. When it passed through certain materials, light could be filtered — or polarized — in such a way that beams emanated in only one direction. The result was the elimination of the distracting glare of unfiltered light.

But natural materials that polarized light were rare and expensive. At the end of his freshman year, Land shocked his parents with the news that he had decided to take a leave of absence from Harvard, move to New York City, and devote himself to developing an artificial light polarizer. He worked from his basement apartment, with occasional nighttime forays into the Columbia University chemistry labs. After two years of furious experimentation, the young man applied for and received a patent on a synthetic light polarizer. It was the first of more than 500 patents he would receive, making him second only to Thomas Edison.

Polaroid's scientists soon developed a reputation for problem solving; they could move quickly from pure to applied science. 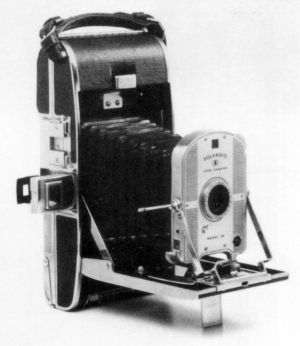 Land returned to Harvard in 1929 at the age of 20. He was determined to make his patent useful. With physics instructor George Wheelwright, he envisioned important applications for his invention: filters for auto headlights and cameras, sunglasses, glare-reducing windows. Anxious to begin commercial production, in 1932 Land left Harvard one semester shy of graduation. "The Bill Gates of his era," as the Boston Globe described him, was like Gates, a Harvard dropout who achieved success without the lauded degree. Land and Wheelwright established the Land-Wheelwright Laboratories in Cambridge.

The men secured contracts from Kodak for photo filters and from the American Optical Company for sunglasses. But in the depths of the Great Depression, Land was unable to interest Detroit in his pet project, glare-reducing polarized filters for auto headlights. Land and Wheelwright managed to keep the business afloat, and in 1937 they formally incorporated the company under the name Polaroid.

When the U.S. entered World War II, George Wheelwright joined the Navy. Edwin Land chose a different way to serve his country. He gathered the best young scientists from Harvard, M.I.T., and Smith College and made Polaroid into a place that melded scientific research and business. The biggest room in the headquarters building was the research library. Land encouraged creativity, collaboration, and a can-do attitude. Polaroid's scientists soon developed a reputation for problem solving; they could move quickly from pure to applied science. The U.S. military repeatedly turned to Polaroid to help surmount technological challenges it faced.

Within the hour, the camera, the film, and the physical chemistry became so clear to me that . . . I hurried over to the place where [a colleague] was staying, to describe to him in great detail a dry camera which would give a picture immediately after exposure."

For the military, Land and his team created glare-screening goggles, polarized gun sights, glare-proof airplane glass, and a 3-D machine for training machine gunners that was the forerunner of later arcade games. The company's workforce grew into the thousands. But the return of peace brought a decline in military contracts. Land watched as his payroll shrank to only a few hundred. The company would fail without a new product.

The inspiration came on a family vacation in California. Land took a picture of a burro for his three-year-old daughter, Jennifer. When the little girl impatiently asked, "Why can't I see it now?" she spurred her father's imagination. He went for a walk to think through the problem. Many years later he recalled, "As I walked around . . . I undertook the task of solving the puzzle [Jennifer] had set me. Within the hour, the camera, the film, and the physical chemistry became so clear to me that with a great sense of excitement I hurried over to the place where [a colleague] was staying, to describe to him in great detail a dry camera which would give a picture immediately after exposure."

It took Polaroid scientists nearly five years to make Land's vision into a reality. By the fall of 1948, the Land 95 camera, priced at $89.95, was ready for the public. On the day after Thanksgiving, a sales and demonstration crew arrived at Boston's Jordan Marsh Department Store. As astonished customers witnessed the first instant photos being made, cameras flew off the shelves. The demonstration ended early when the entire stock of cameras sold out.

As astonished customers witnessed the first instant photos being made, cameras flew off the shelves.

For the next half-century, Polaroid's instant cameras would be a cultural phenomenon and the company would set high standards as a model employer. The development of new and improved versions and a series of clever advertising campaigns ensured Polaroid's success. By 1972, it was a huge corporation, with operations all over the world. That year, Land introduced a product that he believed came close to perfection: the SX-70, a fully automatic, motorized, folding, single-lens reflex camera that produced high quality color prints in a matter of seconds.

But there were clouds on the horizon. Despite the popularity of Polaroid cameras, the stock price was falling and, equally ominous, Kodak had gained nearly 30% of the instant camera market. In 1976 Polaroid filed a patent infringement suit against its rival. Although Polaroid eventually won the lawsuit, weak management and the explosive growth of digital photography brought about what would once have been unthinkable. In 2001, one of the state's premier companies filed for Chapter 11 bankruptcy. It has since been sold twice to investors; the Polaroid brand is now owned by a Minnesota-based holding company.

The American Chemical Society has designated the former location of the Polaroid Corporation Laboratories, a National Chemical Landmark, which is commemorated by a plaque on the building at the corner of Main and Osborne Streets in Kendall Square.

Land's Polaroid: A Company and the Man Who Invented It, by Peter C. Wensberg (Houghton Mifflin Company, 1987).

Insisting on the Impossible: The Life of Edwin Land, by Victor K. McElheny (Perseus Books, 1999).

On this day in 1947, Jordan, Marsh and Company announced that it was going to build "the greatest department store in the world" in downtown Boston. Almost a hundred years earlier, in 1851, Eben Jordan...

On this day in 1983, Southbridge celebrated the 150th anniversary of the nation's oldest optical company — the American Optical Company, or "the A.O." as it was known in the Worcester County town where it...