Baseball knew him as its greatest winning pitcher, one of the first pitchers to enter the Hall of Fame. His 30-odd neighbors in this tiny village knew him for the most tender and enduring love story ever written in his native Tuscarawas County Hills.

Cy was 88. It was 65 years ago that he trudged out of the hill country, a rawboned farm youth of 23, to write one of the most glowing chapters in baseball's history. He appeared in 906 games over a 22-year span in the big leagues, winning 511 and losing 315. He pitched four no-hit games, three in the majors.

His real name was Denton True Young, although he's entered on the scroll of fame as Denton Tecumseh Young. But everyone hereabouts, and throughout the world, knew him as Cy - a spinner of yarns, a woodchopper, and an outspoken critic of the modern trend of changing pitchers at the first sign of trouble

Cy, despite his fabulous record, never earned more than $2500 a year in baseball. His first salary at Cleveland - he was traded to that club by Canton, Ohio, for a suit of clothes - was $1400.

"But I got home with more than $1000 of that year's pay," Cy recalled years ago. "And when I got home, with more money in one lump than anyone in these hills had ever seen, I married the girl on the next farm."

Long after he had given up baseball, he was enshrined in the Hall of Fame. He was serving as sergeant-at-arms in the Ohio Legislature at the time, and when told that "Denton Tecumseh Young" had been named to the Hal of Fame, he drawled: "That's not my name, but I think I'm the guy they mean. My name is Denton True Young."

He explained he had been named "True" because his dad had served under a Civil War captain of the name. The Tecumseh grew out of the fact he had been called "Chief" by many of his playing mates....

Despite his advanced age and failing eyesight, Cy was a competitor to the end. Not too long ago he said:

"I loaf around most of the time, but I help with anything that has to be done around the farm like husking corn, looking after the horses or splitting wood. I do it for the exercise."

From The Worcester Town & Telegraph, by Fritz Howell, November 5, 1955.

On this day in 1955, legendary pitcher Cy Young died. He spent much of his 22-year career in Boston, arriving in 1901 to play for the new American League team that would become the Red Sox. He pitched the opening game, in which Boston beat Philadelphia 12–4. On May 5, 1904, in Boston, he pitched the first perfect game in American League history. During his years in the majors, he won 511 games — one of several records he holds to this day. By the time he retired in 1911, he had pitched 751 complete games, including three no-hitters. The Ohio farm boy earned his nickname from his cyclone-like fastball. The year after his death, Major League Baseball established the coveted Cy Young Award in his honor.

He generally pitched every other day, often throwing complete games and once even winning both games of a doubleheader. 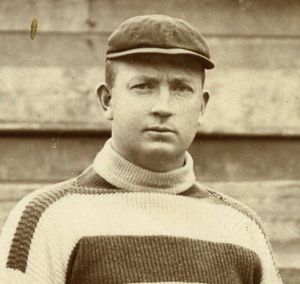 Born Denton True Young in 1867, the future Hall of Famer lived and worked on the family farm in eastern Ohio until he was 23. At 6' 2" and 210 pounds, he was all muscle. But for all his physical prowess, he was shy. When he went to try out for the Canton, Ohio, Tri-State League in 1890, he walked around the outside of the ballpark six times before summoning enough courage to go in. Impressed by his size and strength, the manager offered Young a contract for $40 a month.

When the Tri-State League folded part way through the season, Young's time in the minor leagues ended, too. The interruption in his career was short, however. By August, the Cleveland Spiders, a National League club, had signed him. During his nine years with the Spiders, he won 239 games and lost 134. Except for his rookie year, he won at least 21 games each season, and in 1892, 1893, and 1895, he won more than 30. He generally pitched every other day, often throwing complete games and once even winning both games of a doubleheader.

When he went to try out for the Canton, Ohio, Tri-State League in 1890, he walked around the outside of the ballpark six times before summoning enough courage to go in.

In 1901 the newly formed American League lured 34-year-old Young away from the National League by offering him $3,000 a year ($600 more than the top National League salary he had been earning). Settled in Boston, he thrilled the fans by posting a 33-10 record and a 1.62 E.R.A.

In eight seasons with the Red Sox, Young and the flamboyant Rube Waddell of the Philadelphia Athletics shared the spotlight as the game's star pitchers. Among their most memorable face-offs was the game at the old Huntington Avenue Grounds on May 5, 1904. For eight innings, Cy Young left the mound without having allowed a single batter to reach base. Tension mounted. At the top of the ninth, with two outs, Young threw again. The batter launched the ball deep into center field, and the crowd held its breath until the ball rested safely in the outfielder's glove. Cy Young had just pitched a perfect game. "Of all the 879 games I pitched in the big leagues," he said, "that one in Boston stands clearest in my mind."

"Of all the 879 games I pitched in the big leagues," he said, "that one in Boston stands clearest in my mind."

On August 13, 1908, in his last season with the Sox, the Boston Post sponsored an exhibition game with Young facing an All-Star team. As soon as the gates to the Huntington Avenue Grounds opened on "Cy Young Day," 20,000 fans streamed in; an additional 10,000 had to be turned away. Young was so overwhelmed that he could not say a word in response to the speeches and presentations.

After a short stint with the Cleveland Indians in 1911, 44-year-old Young returned to Boston and finished out the season and his career playing for the Braves. Universally admired by teammates and opponents alike for his courtesy, the even-tempered former farm boy from Ohio was never once ejected from a game. In 1937 Cy Young was elected to the Baseball Hall of Fame. He died in 1955 at the age of 88.

The former Huntington Avenue Grounds are now part of Northeastern University; a statue of Cy Young stands approximately on the site of the pitcher's mound from where he threw his perfect game.