PROVINCETOWN IS PRAYING WEATHER MAY CHANGE

Provincetown is ready for President [Taft]. In her harbor lie more than a dozen warships that tomorrow will belch a greeting to the chief executive when he comes on the Mayflower to dedicate the great monument of Maine granite commemorating the first landing of the Pilgrims that, completed, rears its head 347 feet over the harbor's level.

. . .Under every one of the tight and snug roofs of Provincetown strangers are sleeping tonight. All beds are taken and in many a spare room that is used only on state occasions cots are set up for the visitors.

Preparations for the big day have been going on for a long time. They really began with this spring's house cleanings and annual whitewashings, which were unusually thorough.

. . . About 1:30 the main street presented its high tide of packing and jamming for the day. . . Pedestrians who walked in the roadway because there was no more room on the narrow sidewalk had several hairbreadth escapes from being run down and flattened out by honking juggernauts. The small boys of the town, greatly excited by the unwonted stir, darted in and out of the crowd and whooped joyously. There was much noise and merriment and all the while the heavy, cool wind from the bay filled the streets with its damp and saline breath and fluttered and ruffled the decorations…most gaily.

I'd like to add that the bronze bas-relief, "Signing the Mayflower Compact", located at the base of the Pilgrim Monument in Provincetown was designed by Massachusetts sculptor, Cyrus Dallin. Dallin completed many works around the state and beyond that you would recognized, including "Paul Revere" in front of Old North Church, "Appeal to the Great Spirit" in front of the MFA, and "Anne Hutchinson" in front of the Old State House. Visit the Cyrus E. Dallin Art Museum in Arlington Center to learn more about this accomplished artist. http://www.dallin.org/
Login

On this day in 1909, two young girls, using ropes and a pulley, helped haul the last stone into place to complete the Pilgrim Monument in Provincetown. The town's Yankee residents had long been seeking funds to erect a monument to the Pilgrims, who landed on the tip of Cape Cod weeks before they ever laid eyes on Plymouth. It took until 1906 to raise enough money. The following year, President Theodore Roosevelt sailed to Provincetown in a yacht appropriately named the Mayflower to lay the cornerstone of the monument. Three years later, President William Howard Taft spoke at the dedication. 116 steps and 60 ramps lead to the top of the 252-foot tower, which is still the tallest all-granite structure in the United States.

In 1900 nearly 45% of the town's residents were of Portuguese descent. 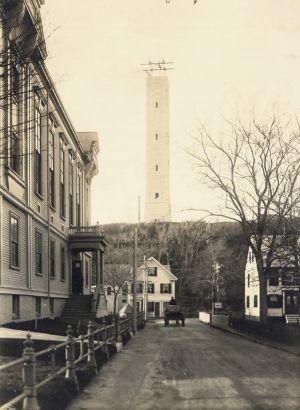 In 1892 a group of Yankee businessmen formed an association to draw attention to the often-overlooked fact that the Mayflower landed in Provincetown, not Plymouth. The goal was to erect a magnificent monument atop the town's highest hill. They persuaded the federal and state governments each to contribute 40% of the $90,000 cost; by 1906, they had raised the remaining $18,000, and construction began.

The choice of an Old-World design — the monument was modeled on a tower in Siena, Italy — reflected the desire to emphasize Provincetown's connection to the very earliest days of the American experiment. There were several reasons to do this. One had to do with the changing nature of Provincetown's population. Yankees had been the dominant force in the community for over two centuries, but by the late nineteenth century, their economic power and social prestige were waning. Portuguese fishing captains dominated the fishing industry. In 1900 nearly 45% of the town's residents were of Portuguese descent. The monument would commemorate and reinforce the Yankees' role in Provincetown.

The monument would also have direct economic benefits. Plymouth had built its first monument to the Pilgrims in the 1860s, giving it a big head start when it came to attracting the growing numbers of tourists who visited coastal Massachusetts in search of colonial history. With the demise of its whaling industry, Provincetown needed to capture a share of this expanding tourist economy.

"What they saw as they gazed over the Mayflower's railing appeared to be "a hideous and desolate wilderness, full of wild beasts and wild men . . . they knew not [how many]." 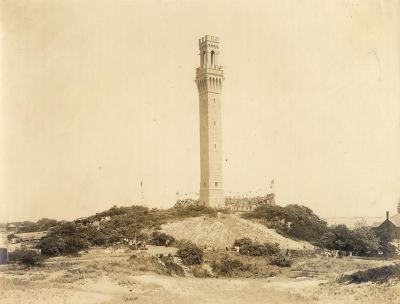 Provincetown did indeed play an important, if brief, role in early colonial history. When the Mayflower set sail from Plymouth, England, on September 6, 1620, it was heading for present-day Manhattan, which at the time was the northern border of Britain's Virginia territory. Either by accident or intention, on November 19th, the crew "espied land which [they] deemed to be Cape Cod, and so afterward it proved." They tried to sail around the Cape but strong headwinds forced them to turn back. On November 21st, the Mayflower anchored in Provincetown harbor.

"Being thus arrived in good harbor, and brought safe to land," William Bradford wrote, "they fell upon their knees and blessed the God of Heaven who had brought them over the vast and furious ocean, and delivered them from all the perils and miseries thereof." Thankful as they were to have survived the voyage, the newcomers' trials were hardly over. They "had now no friends to welcome them, nor inns to entertain or refresh their weatherbeaten bodies; no houses or much less towns to repair to. . . . "What they saw as they gazed over the Mayflower's railing appeared to be "a hideous and desolate wilderness, full of wild beasts and wild men . . . they knew not [how many]."

The late autumn winds were brisk, temperatures raw, and everything on board the ship was damp. The only way to reach shore was to wade through shallows and over sandbars at low tide. The Mayflower was too large a vessel to use to explore the coast, and the smaller shallop that had been brought along needed extensive repairs. Circumstances were dire, and unity was essential.

Although numerous nineteenth-century writers would claim that the Compact was "the germ of American republicanism," it was in fact intended to reinforce "due submission and obedience" rather than establish new democratic liberties.

The day the ship dropped anchor off Provincetown, concern over "discontented and mutinous speeches" led the leaders to require the 41 free adult men on board to sign a document that later came to be known as the "Mayflower Compact." Although numerous nineteenth-century writers would claim that the Compact was "the germ of American republicanism," it was in fact intended to reinforce "due submission and obedience" rather than establish new democratic liberties.

While the shallop was being repaired, groups of men set out to explore the area on foot. On November 15th, a line of men armed with muskets and swords walked behind Captain Miles Standish into the "wilderness." Soon they saw five or six native people, who immediately fled. The Englishmen followed their tracks without encountering the Indians. They did find small hills and valleys, a pond, and a field that had been cultivated. They unearthed a store of corn buried in baskets and took as much as they "could carry away," intending, Bradford wrote, to pay the "savages" if they met up with them.

Time was running out if they were not going to remain in Provincetown. The fishing and whaling appeared to be good, there were cleared fields ready for planting, and the harbor was shallow but well protected. In short, Provincetown was "healthful, secure, and defensible," and surely late November was not the best time to explore further. But Provincetown had one critical drawback: a shortage of fresh water.

"We marched also into the land, and found diverse cornfields, and little running brooks, a place very good for situation [settlement], so we returned to [the Mayflower] again with good news to the rest of our people, which did much comfort their hearts."

On December 6th, Susanna White gave birth on board the Mayflower to her son Peregrine, the first English child born in Massachusetts. That same day, 18 men took the shallop and sailed west across the stormy bay. On December 8th, as they approached modern Plymouth, their mast split apart and the rudder broke. They had no choice but to row and use an oar to steer. They spent the night and the next day, which was Sunday, on Clark's Island. On Monday, they first set foot on the land that would become Plymouth.

They "found it a very good harbor. . . We marched also into the land, and found diverse cornfields, and little running brooks, a place very good for situation [settlement], so we returned to [the Mayflower] again with good news to the rest of our people, which did much comfort their hearts."

Almost five weeks after it had made landfall on Cape Cod, the Mayflower sailed for Plymouth. Of the 102 passengers when the ship left England, one had died en route and four more succumbed while they were anchored in Provincetown harbor. Ninety-nine passengers were aboard when they arrived in Plymouth on Monday, December 18, 1620. It would be the early eighteenth century before anyone claimed the Pilgrims stepped ashore on Plymouth Rock.

A full-scale replica of the Mayflower, operated by Plimoth Plantation, is docked in downtown Plymouth.

NPR: Plymouth and Provincetown, After the Pilgrims

Mourt's Relation: A Journal of the Pilgrims at Plymouth, with an introduction by Dwight B. Heath from the original text of 1622 (Applewood Books, 1963).

On this day in 1621, the ship Fortune set sail from Plymouth Colony. The arrival of the vessel two weeks earlier — sent by the English investors who had funded the Mayflower colonists— should have...