Dr. Spencer, the fifth employee in Raytheon, was a director emeritus of the company.

Following his formal retirement as a senior vice president in 1964, he continued to serve the company actively as a senior consultant. He joined Raytheon in 1925. He helped develop the first gaseous rectifier tube, which made the radio a plug-in appliance.

Dr. Spencer was a leading authority in the field of microwave energy and high frequency devices, and held patents for 120 inventions.

His inventions included the application of microwave energy to medical diathermy and the Radarange oven that cooks food electronically.

He headed Raytheon’s Microwave and Power Tube Division for 17 years. As a result of inventions made in the field of radar during this time Dr. Spencer was awarded the U. S. Navy’s Distinguished Service Medal.

Dr. Spencer also developed the special electronic tubes that made possible the proximity fuses introduced in World War II. For this he received the Navy’s Naval Ordnance Award.

On this day in 1894, Percy Spencer, the self-taught scientist who discovered the power of microwave technology, was born. With an endlessly curious mind, Spencer spent much of his early life figuring out how things worked. Orphaned as a small boy, Spencer had little schooling before he entered the workforce. But a fascination with electricity and nights of studying on his own led to a job with a new firm in Cambridge — Raytheon. During World War II, Spencer and his co-workers developed technology that gave the Allies a critical edge in radar detection. Later, a set of simple experiments based on everyday experiences resulted in the first microwave oven, the 750-pound, five-foot-tall RadarRange.

His lack of formal education meant that he had to teach himself trigonometry, calculus, chemistry, physics, and metallurgy at night. 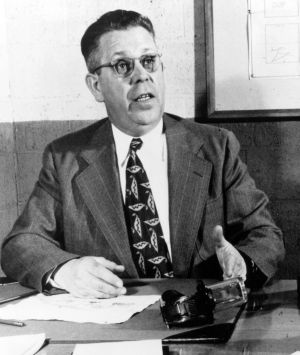 Percy Spencer, a New England farm boy who never completed grammar school, grew up to be one of the world's most successful and respected electrical engineers. One colleague with a degree from M.I.T. suggested that Spencer's lack of formal education may have been an asset. "The educated scientist knows many things won't work. Percy doesn't know what can't be done." The boy who never finished grammar school eventually earned "the respect of every physicist in the country, not only for his ingenuity, but for what he has learned about physics by absorbing it through his skin."

Spencer was born in Howland, Maine. When his parents died, the boy was sent to live with an aunt who made her living as an itinerant weaver. The two traveled about New England, existing on what she earned from weaving and what he made doing any odd jobs he could find. He had to "solve [his] own situation," as he later remembered; in doing so, he learned how to get things done. Spencer's "Yankee ingenuity" — what Readers' Digest called his "itch to know" — would later help him solve engineering problems that others had either failed to notice or given up on. 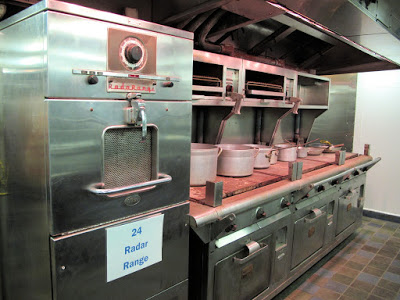 Spencer left school in the fifth grade to take a factory job. Four years later, the owners of a local paper mill decided to install electricity. Even though the 16-year-old Percy knew nothing about electricity, he signed on to help install the system. He learned by trial and error and studied textbooks at night; by the time the project was finished, Percy Spencer was a skilled electrician.

The new fields of electricity and wireless technology caught the young man's imagination. When he learned of the heroic role radio operators had played during the sinking of the Titanic, he joined the Navy so he could learn to be one of them. His lack of formal education meant that he had to teach himself trigonometry, calculus, chemistry, physics, and metallurgy at night. After he was discharged from the Navy at the end of WWI, the 25-year-old set off to pursue his passionate interest in electricity.

About the same time, Lawrence Marshall and Vannevar Bush, who had been roommates at Tufts University in Medford, were also thinking about ways to put electricity to practical use. Thanks to Bush's position on the M.I.T. faculty, the men had good connections in the business world and in the university. They decided that electricity could be applied to labor saving devices for the household. In 1922 they founded the American Appliance Company in Cambridge; three years later, the company added Percy Spencer to its three-man staff.

One of his earliest contributions was a series of improvements to photoelectric vacuum tubes, a major step in the development of the television tube.

In October of 1925, the company's name was changed to Raytheon ("rai" from the old French "beam of light" and "theon" from the Greek "from the gods"). In 1934 it moved from Cambridge to a former button factory in Waltham. From there, it would become one of the world's leading technology firms with employees all over the world. Its early emphasis on household appliances would evolve into a specialization in defense and space electronics.

It was Percy Spencer, with his Yankee way of problem solving, who was responsible for many of the company's biggest breakthroughs. His curiosity was legendary, and he had the ability to collaborate with highly educated physicists while pursuing his characteristic "let's tinker and see" approach. One of his earliest contributions was a series of improvements to photoelectric vacuum tubes, a major step in the development of the television tube.

In 1941, as the U.S. was preparing to enter WW II, he focused his efforts on the magnetron, the microwave tube in which electrons generated from a heated cathode produce radiation that could be used in radar. Working night and day, he increased the efficiency of the magnetron and boosted output from one magnetron a week to an astonishing 2,600 a day. Radar sets Spencer designed were installed in U.S. bombers, where they were powerful enough to spot periscopes on German submarines. For this accomplishment, he won the Distinguished Public Service Award, the highest honor the Navy bestows on civilians.

The original microwave ovens were huge and expensive, but restaurants, vending companies, airlines, and other commercial operations realized at once the advantages of quick-cooked food.

But Spencer is best remembered for a casual observation that would lead to a major change in food preparation. Standing next to a magnetron one day, he noticed that a candy bar in his pocket melted. This caused him to wonder if the energy from radio waves could be used to cook food. He placed popcorn kernels near the tube; within minutes, he was snacking on the world's first microwave popcorn.

In 1947 Raytheon produced the first RadarRange, based on Spencer's discovery. The original microwave ovens were huge and expensive, but restaurants, vending companies, airlines, and other commercial operations realized at once the advantages of quick-cooked food. A home model went on sale in the 1950s. The public was slow to accept the new method of cooking, but by the time Percy Spencer died in 1970, microwaves were fast becoming a nearly universal feature in American kitchens.

With its world headquarters in Waltham, the company Percy Spencer helped build is now one of the largest employers in Massachusetts and a leading figure in the global defense industry.

"Percy Spencer and His Itch to Know," by Don Murray in Readers' Digest Magazine (August, 1958).

The Creative Ordeal: The Story of Raytheon, by Otto J. Scott (Atheneum, 1974).