On Sunday last, Paul Revere, Esq. aged 83. In the death of Col. Revere the community, but especially the extensive circle of his own connections, have sustained an irreparable loss. . . . Cool in thought, ardent in action, he was well adapted to form plans, and to carry them into successful execution, –– both for the benefit of himself & the service of others.

In the early scenes of our revolutionary drama, which were laid in this metropolis, as well as at a later period of its progress, his country found him one of her most zealous and active of her sons. His ample property, which his industry and perseverance had enabled him to amass, was always at the service of indigent worth, and open to the solicitations of friendship, or the claims of more intimate connections. His opinions upon the events & vicissitudes of life, were always sound and formed upon an accurate observation of nature and an extensive experience. His advice was therefore as valuable as it was readily proffered to misfortune. A long life, free from the frequent afflictions of diseases, was the consequence of constant bodily exercise, & regular habits, –– and he has died in a good old age & all which generally attend it,

"As honors, love, obedience, troops of friends," have followed him to the tomb.

A minor point...But didn't the British evacuate Boston in March of '76 not April?
Login

On this day in 1940, a bronze statue of Paul Revere was unveiled in the shadow of the Old North Church. In the crowd of 8,000, stood the sculptor — 79-year-old Cyrus Dallin. He had waited 55 years since a committee had first selected his design to see his statue erected. Not surprisingly, the statue showed Revere astride a horse, as he was during his legendary ride. But Revere's accomplishments did not end with independence. After the Revolution, he opened an iron foundry and in 1801 established the first copper rolling mill in North America. The North End house Revere owned for 30 years has been restored. Open to the public since 1908, it is the oldest building in downtown Boston.

Revere also advertised as a dentist. He not only cleaned teeth, but also wired in false teeth carved from walrus ivory or animal teeth. 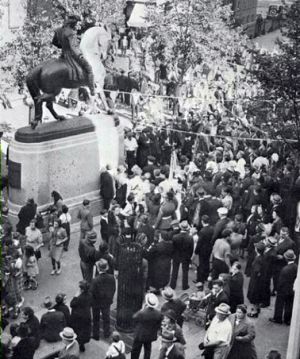 Henry Wadsworth Longfellow transformed Paul Revere from a locally known patriot to a symbol of the colonies' resistance to British tyranny. Unfortunately, the poet did not get the facts quite right. A British patrol intercepted Revere before he ever got to Concord. Whatever Longfellow's errors, Paul Revere did play an important role in the struggle for independence.

Paul Revere was born in Boston in December 1734 to Apollos Rivoire, a French immigrant, and Deborah Hichborn. His father changed his name to Revere sometime before his son's birth. The elder Revere was a goldsmith, and Paul apprenticed with him. He was only 19 when his father died but already skilled enough working with metal to take over his father's shop two years later.

In 1757 he married Sarah Orne, and in 1770 he moved his wife and five children to a large townhouse in Boston's North End. The house was considered outdated at the time, but perfect for a man of middling income and a growing family. His wife died three years later, soon after giving birth to their eighth child. Doubtless overwhelmed by his children's needs, Revere married Rachel Carlisle Walker within the year. They, too, would have eight children.

Revere was "a master artisan whose ambition for economic success and social distinction drew him to the republican ideals of liberty and equality." 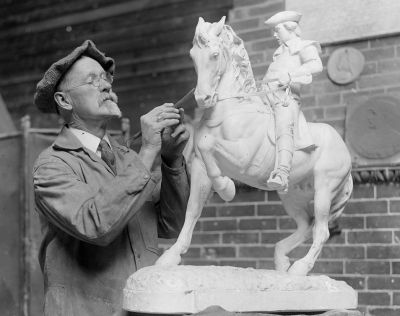 Working with numerous apprentices and journeymen, Revere produced pieces ranging from simple spoons to magnificent tea sets. During the economic depression that preceded the Revolution, Revere also advertised as a dentist. He not only cleaned teeth, but also wired in false teeth carved from walrus ivory or animal teeth. He further supplemented his income by working as a copper plate engraver. In addition to the usual jobs — illustrations for books and magazines, business cards, and bills of fare for taverns — he created several now famous propaganda pieces, including a misleading depiction of the Boston Massacre that fueled colonists' anger.

As biographer Jayne E. Triber explains, Revere was "a master artisan whose ambition for economic success and social distinction drew him to the republican ideals of liberty and equality." He was friendly with James Otis, Dr. Joseph Warren, and other patriot leaders. An active member of the Sons of Liberty, he was Boston's best known "messenger of the American Revolution," serving as a courier for the Boston Committee of Correspondence and the Massachusetts Committee of Safety and as an express rider from Boston to the Continental Congress in Philadelphia.

By 1788 he was operating a foundry that produced bolts, spikes, and nails for North End shipyards; the brass fittings for the U.S.S. Constitution were made there.

Following the British withdrawal from Boston in April 1776, he received a commission in the Massachusetts militia. He was later promoted to colonel in the Massachusetts Artillery. Charges of cowardice and insubordination following an ill-fated expedition in 1779 marred his military career. Forced to resign, he spent three years seeking vindication. He finally succeeded when a military court ruled in 1782 that "Lieutenant-Colonel Revere be acquitted with equal Honor as the other Officers in the same Expedition."

In the years following the Revolution, Revere expanded his business interests. By 1788 he was operating a foundry that produced bolts, spikes, and nails for North End shipyards; the brass fittings for the U.S.S. Constitution were made there. Revere also began manufacturing cannon for state and federal governments in the early 1790s. The foundry also began casting bells, one of which still tolls in the steeple of Boston's Kings Chapel. In 1801, he branched out again, opening a copper rolling mill that provided the copper sheeting for the hull of the U.S.S. Constitution and for the dome of the new Massachusetts State House.

Like many other successful Boston businessmen, Paul Revere had a long affiliation with the Freemasons. In his role as Grand Master of the Massachusetts Grand Lodge (1795–1797), he presided over the laying of the cornerstone for the new State House on Beacon Hill. He retired at the age of 76 and died seven years later on May 10, 1818.

The neighborhood had become crowded with immigrants, and the house had long since fallen into disrepair, being used as a tenement, cigar factory, and grocery store.

In 1902 John Phillips Reynolds, Jr., a fourth-generation descendant of Paul Revere, saved his forebear's deteriorating home then almost 225 years old. The neighborhood had become crowded with immigrants, and the house had long since fallen into disrepair, being used as a tenement, cigar factory, and grocery store. Reynolds "hoped that others [would] join in preserving this venerable landmark." Eventually they did, and three years later, the Paul Revere Memorial Association (PRMA) was formed. The preservation of the Revere House was among of several similar campaigns initiated in the early twentieth century to save historic buildings of "Old New England."

The PRMA's first project was to restore the exterior of the house to its seventeenth-century appearance. Architect Joseph Everett Chandler was hired to re-create the Revere-era building, which included removing later architectural additions, as was the practice in early preservation efforts. Inside, decorative finishes, furniture, and Revere artifacts give a sense of how the home looked when the Revere family lived there in the late 1770s.

The house opened to the public in April 1908, one of the first historic house museums in the country. In 1970, the PRMA acquired the Pierce/Hichborn House, once owned by a cousin of Paul Revere. The Association's mission was further enhanced by the opening of a new Education and Visitor Center in adjacent Lathrop Place buildings in late 2016. The Paul Revere House remains a popular stop on the Freedom Trail on Boston's many guided walking tours.

The Paul Revere House is shown by guided tour only.

Revere is buried in the Old Granary Burying Ground.

A True Republican: The Life of Paul Revere, by Jayne E. Triber (University of Massachusetts Press, 1998).

"The Saga of the Paul Revere Statue," by Gretchen Adams in The Revere House Gazette (Issue 29, winter 1992).

On this day in 1799, William Dawes died. The first man to be dispatched on the night of April 18, 1775, Dawes carried the same message as Paul Revere, but while Revere rowed across the...

On this day in 1797, USS Constitution was launched in Boston. It took three attempts to set the immense ship, reinforced with heavy diagonal planking and copper sheathing, afloat. Shipyard officials warned townspeople to be...