In March 1780, Paul Cuffee and six other African Americans submitted a petition to the legislature of the new state of Massachusetts.

The petition of several poor Negroes & molattoes who are Inhabitants of the Town of Dartmouth Humbly Sheweth - That we being Chiefly of the African Extract and by Reason of Long Bondag and hard Slavery we have been deprived of Injoying the Profits of our Labouer or the advantage of Inheriting Estates from our Parents as our Neighbouers the white peopel do. . . we have been & now are Taxed both in our Polls and that small Pittance of Estate which through much hard Labour & Industry we have got together to Sustain our selves & families withal - We apprehand it therefore to be hard usag and [one word is illegible here - ed.] doubtless (if Continued will) Reduce us to a State of Beggary whereby we shall become a Berthan to others if not timely prevented by the Interposition of your Justice & power & yor Petitioners farther sheweth that we apprehand ourselves to be Aggreeved, in that while we are not allowed the Privilage of freemen of the State having no vote or Influence in the Election of those that Tax us yet many of our Colour (as is well known) have cheerfully Entered the field of Battle in the defence of the Common Cause. . . .

That these the Most honouerable Court we Humbley Beseech they would to take this into Considerration and Let us aside from Paying tax or taxes.

On this day in 1815, Paul Cuffe of Westport sailed for the west coast of Africa with 38 black emigrants and a cargo of goods on board his vessel. The goal was for the families to begin a new life in Sierra Leone, to bring Christianity to Africans, and to create trade between Africa and the U.S. — one that did not involve trafficking in human beings. As a successful ship captain, ship owner, and merchant, Cuffe was among the most respected Black men in the country. His venture was the first Black-initiated "back to Africa" effort in the U.S. When white men — with mixed motives — began to advocate sending free African Americans to Africa just a few years later, most Black men and women denounced their efforts at "colonization."

Some African Americans, convinced they could never achieve equality in the U.S., supported colonization, but most fiercely opposed it. 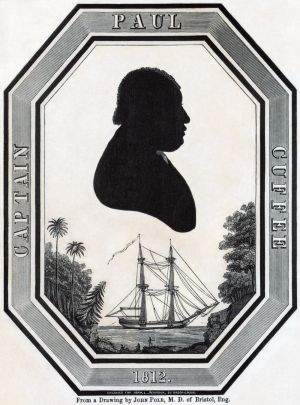 Decades before Henry David Thoreau was jailed for refusing to pay his taxes, Paul Cuffe and his brother spent time in a Taunton jail for a similar act of civil disobedience. In 1780 the Cuffes and five other free Blacks petitioned the Massachusetts legislature for "relief from taxation." One of several arguments they made was that they were "not allowed the Privilage of freemen of the State having no vote or Influence in the Election of those that Tax us yet many of our Colour (as is well known) have cheerfully Entered the field of Battle in the defence of the Common Cause." They did not prevail with the lawmakers, and eventually they paid the taxes, but in 1783, a state court established that male taxpayers, black as well as white, had the right to vote.

One of ten children, Paul Cuffe was born in 1759 to Kofi and Ruth Moses Slocum, who lived on Cuttyhunk Island in Buzzard's Bay. His father had been captured and enslaved in West Africa, but by the time Paul was born, he had bought his freedom from his Quaker master. Ruth Slocum was a Wampanoag Indian. Paul was 13 when his father died. He and his brother inherited a 116-acre farm in Westport, but it was not enough to support the family. Like many young men in that part of Massachusetts, Paul turned to the sea, one of the few places a man of color could earn a decent livelihood.

Paul turned to the sea, one of the few places a man of color could earn a decent livelihood.

Cuffe was on his fourth voyage when, in the midst of the Revolution, the British intercepted his vessel and kept him in prison for three months. After his release, he tried to eke out a living from the farm; he also began trading with merchants in villages along the Connecticut coast. By this time, he had dropped Slocum, the name of his father's former owner, and taken his father's African name "Kofi," spelling it Cuffe (or Cuffee in some sources).

Slowly but surely, buying boats sometimes on his own, other times in partnership with family members or other people of color, Cuffe assembled a small fleet of trading and whaling vessels. Sailing under Black captains with Black crews, his ships could be found as far away as the whale hunting grounds of the North Atlantic or in the waters of Scandinavia. By age 50, merchant-mariner Paul Cuffe owned a ship, two brigs, and several smaller vessels, as well as houses and land.

Sailing under Black captains with Black crews, his ships could be found as far away as the whale hunting grounds of the North Atlantic or in the waters of Scandinavia.

Acutely aware of the hardships under which Black Americans, free and enslaved, lived, Cuffe began to think increasingly about promoting the emigration of black Americans to Africa. "I have for some years had it impressed on my mind to make a voyage to Sierra Leone in order to inspect the situation of the country," Cuffe wrote in 1809. A devout Quaker, he also expressed "a real desire that the inhabitants of Africa might become an enlightened people." He also wanted to encourage manumission and to help Africa develop economically.

On two three-month-long visits to Sierra Leone in 1810, he assessed its economic potential and its suitability as a home for African Americans. He conferred with British abolitionists and those who had been instrumental in establishing Sierra Leone as a colony. The War of 1812 delayed Cuffe's plans until December of 1815, when he sailed to Africa with a group of emigrants ranging in age from eight months to 60 years. Only eight of them were able to pay their own way; he covered the cost for the rest.

Paul Cuffe's dream was to make this voyage every year, bringing people and goods to Sierre Leone and returning with merchandise to sell in the U.S. But as it turned out, the first emigrants he transported would be the last. Although he kept in close contact with the group and with other blacks who supported the venture, Cuffe's declining health prevented further travel.

"I have for some years had it impressed on my mind to make a voyage to Sierra Leone in order to inspect the situation of the country," Cuffe wrote in 1809.

In 1816 a group of prominent whites, the majority of whom were slave owners, established the American Colonization Society. The organization had several goals: to send free Blacks "back" to Africa, to bring Christianity to "heathen" peoples, and to stimulate trade between the continents. In the early years, members of ACS sought advice from Cuffe, and he freely offered it. Some African Americans, convinced they could never achieve equality in the U.S., supported colonization, but most fiercely opposed it. No evidence survives to show whether or not Cuffe himself ever had second thoughts. He died in September 1817 and was buried in Westport.

Whatever the practical and moral problems with colonization, Paul Cuffe's vision and achievements were remarkable. He "should be recognized as one of the fathers of American Pan-Africanism and one of the most successful black entrepreneurs of his generation," Donald Wright concludes in African American Lives.

Westport was the home of Paul Cuffe.

The Black Presence in the Era of the American Revolution, by Sidney Kaplan and Emma Nogrady Kaplan (The University of Massachusetts Press, 1989).

On this day in 1638, a ship returned to Massachusetts Bay from the West Indies after a seven-month voyage. Its cargo included cotton, tobacco and, as far as we know, the first enslaved Africans to be...