Zieber and Ransom endeavored to sell machines in New York, and I went off traveling for the same purpose, and visited Baltimore, where I sold a few machines, forwarding the proceeds to Boston as fast as the money was collected. Subsequently, in the spring of 1851, I went to Philadelphia with three machines, and had fifteen dollars when I arrived there. I hired a room for an office, paying twelve dollars for the first month's rent in advance, leaving me with but three dollars for expenses. I succeeded in getting money for some machines, and with the money received there succeeded in paying the workmen at Boston and continuing the manufacture.

Quoted in A Capitalist Romance: Singer and the Sewing Machine, by Ruth Brandon. Published by J.B. Lippincott Co.
×

On this day in 1854, the battle ended over who owned the patent for the first sewing machine. A federal commission ruled that the patent held by Elias Howe of Cambridge was valid and ordered all other sewing machine makers to pay him royalties. The tide had turned in the long "sewing machine war," and in the fortunes of Elias Howe. As the sales of sewing machines exploded, he went from poverty to wealth. Ironically, however, it is Isaac Singer, one of the men on the losing side of the case, who is most closely associated with the invention of the sewing machine. It was Singer, working in a Boston shop, who made improvements to Howe's design that resulted in a commercially viable machine. In the summer of 1846 Elias Howe packed up a model of his new invention and traveled from Cambridge to Washington, D.C. On September 10th, he was granted a patent for the first two-thread lock-stitch sewing machine.

Walter Hunt of New York City had designed a lock-stitch machine in the early 1830s, but in part because he considered the fee too high, he never applied for a patent. 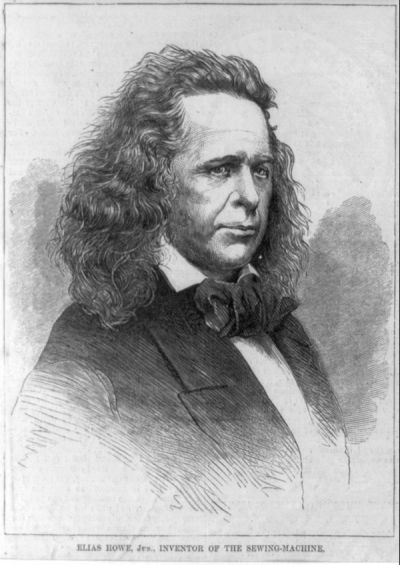 Even before he took his model to Washington, Elias Howe had begun the task of selling the American public, especially professional tailors, on his invention. He staged a show at the Quincy Hall Clothing Manufactory; with the machine sewing 250 stitches a minute, he cheerfully tackled any and all tasks people brought to him. Next he challenged five of Boston's best seamstresses and easily beat the 40 stitches a minute the fastest of them could sew by hand.

There were problems, however. Howe's machine could not stitch along a curve nor follow an angle. And it was expensive, costing $300 - more than an average family earned in six months. Not surprisingly, Elias Howe did not sell a single sewing machine, and it appeared that his fate was to remain a clever but poor man.

Born on July 9, 1819, in the central Massachusetts town of Spencer. Elias Howe was one of eight children. Like most farmers' sons, he attended school only when his father could spare him. By the time he was 12, his struggling parents had hired him out to work for a neighboring farmer. Within a year, he was back home, suffering from ailments that would plague him for the rest of his life. Too frail for farm work, he helped out at the local grist and saw mills. His greatest pleasure was tinkering with the machinery there.

. . . he challenged five of Boston's best seamstresses and easily beat the 40 stitches a minute the fastest of them could sew by hand.

In 1835 Elias Howe moved to Lowell, the new mill town on the Merrimack. While an apprentice at a company that made cotton machinery, he began thinking about the process of drawing threads through fabric. Just two years later, the Panic of 1837 struck, and Elias joined the growing ranks of the unemployed. He soon found work in the small machine shop of a well-known Cambridge inventor. One day he overheard an investor predict that the man who invented a sewing machine would "make an independent fortune." He set out to be that man.

Walter Hunt of New York City had designed a lock-stitch machine in the early 1830s, but in part because he considered the fee too high, he never applied for a patent. Elias Howe may not even have known of Hunt's work when he spent five years on his own design and filed for a patent on it in 1846.

Elias Howe's early marketing efforts ended in failure, and his brother Amasa took the machine to England and sold it to a corset manufacturer named William Thomas for £250. Thomas promised Howe a £3 royalty on each machine sold, but he never paid it and subsequently became a millionaire. He persuaded Elias Howe to come to England; once there, the American was paid a pittance to adapt the machine to the needs of British manufacturers.

One day he overheard an investor predict that the man who invented a sewing machine would "make an independent fortune."

Howe and Thomas had a falling out, and Howe landed in debtors' prison. When he was released, he paid for his passage home by working as the ship's cook. Upon his return to the U.S., he found that word of his invention's success in England had preceded him. In his absence, nearly two dozen companies had begun to make machines based on his design. Recently widowed and with no means to support his three children, the usually easy going Howe went on the offensive: He sued for patent infringement.

In Boston a group of men were busy tinkering with the sewing machine. One of them, Isaac Singer, had already begun making major changes to Howe's original design. Singer added features such as a presser foot, which freed the operator's hands, tension control, and a device that allowed for stitching in a curved line. He also significantly improved the sewing machine's reliability and introduced mass production, bringing down the price. The public was finally won over, and people began to buy sewing machines at a great rate. Isaac Singer was getting rich.

"Other machines are infringements. . . . There is no evidence in this case that leaves a shadow of a doubt that, for all the benefit conferred upon the public by the introduction of sewing machines, the public is indebted to Mr. Howe."

In spite of all the improvements that were being made in the sewing machine, the basic concept was still Elias Howe's. As the Patent Commission concluded in 1854, "Other machines are infringements. . . . There is no evidence in this case that leaves a shadow of a doubt that, for all the benefit conferred upon the public by the introduction of sewing machines, the public is indebted to Mr. Howe."

Even before Howe's death, however, Singer had established itself as the largest sewing machine company in the world. It would become the first multinational conglomerate, and the name "Singer" would long be synonymous with the sewing machine.

A Capitalist Romance: Singer and the Sewing Machine, by Ruth Brandon (J.B. Lippincott, 1977).