Some time this afternoon the Harrison Gray Otis House will arrive at its final destination. An eventful journey it has been for the occupants of the house as the scenery has been changing before their eyes. Looking out through the windows as they went along they would find inch after inch of familiar scenes pass out of line, till the
Charles River dam hid behind a brick wall, for the historic building was speeding ahead at the rate of one foot per hour when the road was clear.

By its own weight the Otis House is so solidly set on the improvised trucks and man-powered motors that it is virtually motorized, and travels without the slightest vibration, carrying with it all its pipe connections for the convenience of its occupants.

What may seem more remarkable is that not even a crack in the building has occurred, although it is a brick structure weighing approximately 900 tons or 1,800,000 pounds. It was never weighed of course, but the working men who had to lift it off its foundation made some calculations on the power they had to apply on to the jacks they used.

Eight men pushed the building by hand. They braced their screw jacks against the ground, pointed the other end toward the building and then, as they turned the screws around one full revolution they pushed the house ahead five-eights of an inch. Thus turning all together at the same time they produced an even forward movement which did not twist the building out of shape.

Does anyone have more information about the technology and traditions of moving houses, particularly in the 19th century? Sources would be appreciated.
moving houses

William B. Steven's "History of Stoneham" tells how in the early winter of 1833, the towns people got together, jacked up the Town House located near the intersection of Summer Street and Pleasant Street, placed it on rollers and with a team of oxen and dragged it across frozen Gould Meadow, now Recreation Park, to its new location at the corner of Pleasant Street and Central Street. It still stands today as a private residence.
Login

On this day in 1925, workmen finished moving an historic Beacon Hill residence back from the brink of destruction. Cambridge Street was slated to be turned from a crooked cobblestone street into a wide thoroughfare, and the Harrison Gray Otis House was in the way. Fortunately, it belonged to the Society for the Preservation of New England Antiquities. Founded 15 years earlier, the Society had already saved five historic properties from the wrecking ball. Now its own home was threatened. In an old New England tradition, the house was jacked up and moved. It has continued ever since to serve as the location for administrative offices and a house museum for what is now known as Historic New England, the oldest and largest regional historic preservation organization in the nation.

Many linked the disappearance of ancient landmarks with the fading of Yankee cultural dominance. 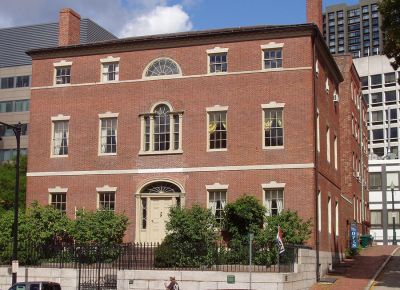 Early New Englanders were accustomed to moving buildings around, as one man put it, just like "checkers on a checker board." Given the relatively high cost of building materials and the labor involved in post-and-beam construction, many buildings were valuable enough to be worth moving.

Sometimes physical changes — for example, a new road or bridge — made a new location more convenient. Farmers often moved sheds and other outbuildings in order to enlarge their houses or barns or make improvements in keeping with the latest in domestic and farming trends. In the early nineteenth century, many churches were jacked up and turned 90 degrees to transform their old "meetinghouse" profile into the newly fashionable "Greek revival" temple style. But most buildings that were moved had simply gotten in the way of change.

After the Civil War, Boston experienced a building boom. With the development of new neighborhoods such as the Back Bay, hundred-year-old buildings on the narrow winding streets of the city's downtown came to be seen as eyesores and firetraps. The real estate was now far more valuable than the buildings. Rather than move old buildings, developers demolished them to create wider streets and erected new structures equipped with indoor plumbing, electric lights, and other "modern" conveniences. 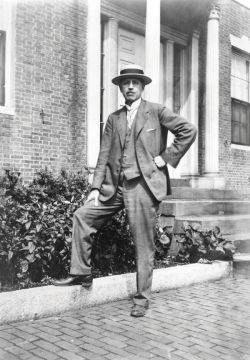 The notion that change represented progress was rarely questioned. In time, however, some Bostonians began to worry about the virtual erasure of the old city. "Bostonians who have been absent from their native city for a few years return to express astonishment as they regard the rapid growth of the city," wrote one observer in 1872. "Old landmarks and localities have almost completely disappeared. . . ."

The new city could seem alarmingly unfamiliar to longtime Bostonians. Many linked the disappearance of ancient landmarks with the fading of Yankee cultural dominance. As buildings that had "heroic histories" (usually associations with events of the Revolution) came under threat, groups of citizens organized to save them. Following the example set by the Virginia women who saved Mt. Vernon, groups formed to rescue Faneuil Hall, the Old State House, Park St. Church, and Paul Revere's house from demolition. But for each success, there were as many failures. Many of the city jewels, such as John Hancock's mansion, were lost.

The father of this early historic preservation movement was William Sumner Appleton. A member of an old and wealthy Boston family, Appleton helped save the Revere house — and found his life's calling. Appleton was independently wealthy and chose to devote his considerable energies to historic preservation. In 1910 he founded the Society for the Preservation of New England Antiquities, the first preservation organization with a regional focus in the country. By the time he died in 1947, SPNEA had preserved 51 historically significant buildings.

William Sumner Appleton introduced the idea that a building was as much an historical artifact as a spinning wheel or a musket.

Appleton brought a novel approach to historic preservation. He believed that the value of a building lay in its architectural qualities as much as its historical significance. He acknowledged that the value of a building increased if important events had occurred there, but he was also keenly interested in buildings that had no particular "heroic associations." William Sumner Appleton introduced the idea that a building was as much an historical artifact as a spinning wheel or a musket.

Recognizing the value of rural places, he was also concerned about the loss of farmsteads, abandoned by families looking for greater opportunities out west or in the city. He advocated a comprehensive program designed to protect a cross-section of the region's architecture.

Appleton took a systematic and pragmatic approach. He developed a careful system of documentation, including precise measurements, drawings, and photographs. Although he initially focused only on structures from the seventeenth century, he gradually expanded the Society's mission to acquire buildings from later periods. In 1916, with financial support from 15 wealthy Bostonians, Appleton purchased the Harrison Gray Otis House for the Society's headquarters.

At the rate of seven feet a day, it took nearly a week to get the building onto its new foundation.

Designed by Charles Bulfinch in 1796, the handsome brick home stood on Cambridge Street at the foot of the north slope of Beacon Hill. The house was the first of three designed by Bulfinch for Harrison Gray and Sally Foster Otis; they left for their second home on Beacon Hill's Mount Vernon Street in 1801. By the time Appleton acquired the property, it had served as a home for John Osborn, a paint merchant, and his family, as the site of medical practice and "patent champoo baths" of Dr. and Mrs. Mott, and as a genteel boarding house run by four sisters.

In 1925, the Otis House was in the way of a street-widening project. Appleton was able to purchase a group of four nineteenth century rowhouses located behind the Otis House. Two were demolished to make space for the Otis House, while the remaining two were attached to serve as office, collections, and museum space. A company was hired to move the house back nearly 43 feet. At the rate of seven feet a day, it took nearly a week to get the building onto its new foundation. The buildings survived another threat in the 1950s when the Boston Redevelopment Authority razed the majority of Boston's West End to make way for urban renewal projects.

Today, the Society, now known as Historic New England, continues to use the building for administrative offices, the Library and Archives, and as a house museum that interprets the story of the Otis House from its beginning as an elegant home for the Otises to its role as a home for historic preservation.

Many of Historic New England's properties are open to the public.

"William Sumner Appleton and the Society for the Preservation of New England Antiquities," by Nancy Coolidge and Nancy Padnos, Antiques, March 1986.

Windows on the Past: Four Centuries of New England Homes, by Diane Viera and Jane C. Nylander (Historic New England, 2010).