Ay, tear her tattered ensign down!
Long has it waved on high,
And many an eye has danced to see
That banner in the sky;

Beneath it rung the battle shout,
And burst the cannon's roar;
The meteor of the ocean air
Shall sweep the clouds no more.

Her deck, once red with heroes' blood,
Where knelt the vanquished foe,
When winds were hurrying o'er the flood,
And waves were white below,

No more shall feel the victor's tread,
Or know the conquered knee;
The harpies of the shore shall pluck
The eagle of the sea!

Oh, better that her shattered bulk
Should sink beneath the wave;
Her thunders shook the mighty deep,
And there should be her grave;

Nail to the mast her holy flag,
Set every threadbare sail,
And give her to the god of storms,
The lightning and the gale!

Holmes appended the paragraph that led to the writing of the poem.

"Old Ironsides.--- It has been affirmed upon good authority that the Secretary of the Navy has recommended to the Board of Navy Commissioners to dispose of the frigate Constitution. Since it has been understood that such a step was in contemplation we have heard but one opinion expressed, and that in decided disapprobation of the measure. Such a national object of interest, so endeared to our national pride as Old Ironsides is, should never by any act of our government cease to belong to the Navy, so long as our country is to be found upon the map of nations. In England it was lately determined by the Admiralty to cut the Victory, a one-hundred gun ship (which it will be recollected bore the flag of Lord Nelson at the battle of Trafalgar), down to a seventy-four, but so loud were the lamentations of the people upon the proposed measure that the intention was abandoned. We confidently anticipate that the Secretary of the Navy will in like manner consult the general wish in regard to the Constitution, and either let her remain in ordinary or rebuild her whenever the public service may require."--New York Journal of Commerce.

Reprinted in The Boston Advertiser, September 14, 1830.

To say that Dr. Holmes's greatest legacy is likely his son, the future Supreme Court Justice, is a huge disservice to the good doctor, who celebrates his bicentennial today. Holmes Sr. was a huge personality during his lifetime and beyond, partly due to his writings and poetry. However, give Holmes credit as one of the greatest medical minds of his generation. He promoted the use of anesthesia and disputed the benefit of blood-letting (now considered quite barbaric). He opened dialogues about euthanasia and the idea of hereditary disease/conditions. His medical practice promoted a type of "talk-based" therapy which pre-dated psychiatry. Perhaps his greatest legacy is his essay on puerperal fever: his suggestion was that doctors should be blamed for the high mortality of mothers and their babies during childbirth due to uncleanly medical practices. This is incredibly important to medical history. The cities of Boston and Cambridge have both named August 29, 2009 "Dr. Oliver Wendell Holmes Day" - and neither did so because of his offspring. Though Junior accomplished great things, Senior deserves the spotlight today - without his son's help.
Typo and Math Issue

On this day in 1809, Oliver Wendell Holmes was born in Cambridge. The man who coined the phrase "Boston Brahmin," he was a true member of that class, and he entertained the nation with poems, stories, and essays about its peculiar ways. A contemporary and friend of Hawthorne, Emerson, and Longfellow, Holmes was a guiding light behind the Atlantic Monthly, the journal that published many of his columns and verses. But Holmes's greatest legacy may have been his son, Oliver Wendell Holmes, Jr., who survived three serious injuries during his service in the Union Army to become a distinguished legal scholar. A justice of the United States Supreme Court for 30 years, Holmes, Jr. had perhaps the greatest legal mind in the nation's history.

The "Great Dissenter," as Holmes was called for the minority opinions he frequently wrote, opposed much of the progressive economic legislation Roosevelt's administration proposed. 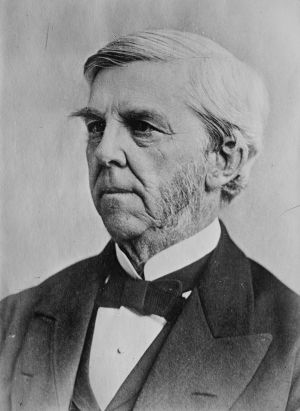 Oliver Wendell Holmes grew up in Cambridge. His father was the son of a Congregational minister and his mother was the daughter of a wealthy Boston merchant. The family was proud of its ties to such old Massachusetts families as the Quincys and the Bradstreets. Young Holmes lived next door to "the college," as Harvard was called in his house. He followed family tradition, graduating with the Class of 1829.

The next year, when he was only 21, a poem first scribbled on bit of paper brought him sudden fame. When he read that the USS Constitution was about to be scrapped for parts, he wrote "Old Ironsides," a lament for the city's and the nation's loss. Printed in a local newspaper in September of 1830, just as Boston was celebrating its 200th birthday, the poem aroused the public to the point where the Navy agreed to preserve the historic battleship. Papers all around the country printed the poem, and copies of it were distributed in the streets. Oliver Wendell Holmes became a household name.

Holmes coined the phrase "Boston Brahmin," and he was a true member of that class. He entertained the nation with poems, stories, and essays about the city's peculiar ways. In "The Autocrat of the Breakfast Table," he wrote that "Boston State-House is the hub of the solar system," a phrase that came to stand for the whole city.

Printed in a local newspaper in September of 1830, just as Boston was celebrating its 200th birthday, the poem aroused the public to the point where the Navy agreed to preserve the historic battleship.

A man of many talents, he had a distinguished 35-year career as a doctor, author on medical issues, and professor and then dean at the Harvard Medical School. His lectures on poets made him popular on the Boston-area lyceum circuit. But it was as a writer that he achieved national prominence. He wrote like the brilliant conversationalist he was, commenting on society with what one biographer called the "whimsically comprehending talk of a boardinghouse sage." His writing, like his life, was strongly rooted in New England, but it had a universal appeal to readers in a romantic age.

The horror of the Civil War ensured that his eldest son would not be a romantic. Oliver Wendell Holmes, Jr. (called Wendell) grew up knowing everyone in Boston's literary and reform societies. He spent his college years at Harvard probing the meaning of the universe with friend and fellow truth-seeker William James. But the harsh realities of the war convinced him to make his "own universe livable" by the study and practice of law.

He wrote like the brilliant conversationalist he was, commenting on society with what one biographer called the "whimsically comprehending talk of a boardinghouse sage." 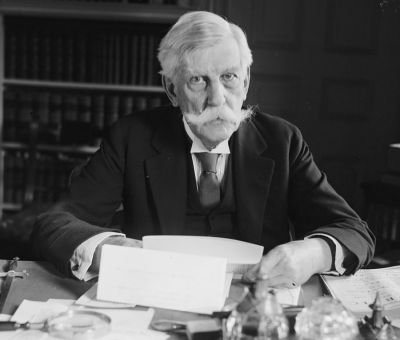 After graduating from Harvard Law School in 1866, the younger Holmes was admitted to the Massachusetts bar. He spent the next 14 years in a Boston law office. A man of keen intellect, he found himself more interested in legal scholarship than daily practice, and in 1881 he published The Common Law, a brilliant treatise on the fundamentals of American law. Within a year he had been appointed a professor at Harvard Law School and then a justice of the Massachusetts Supreme Judicial Court.

Holmes spent 20 years on the SJC, eventually rising to Chief Justice. He earned a reputation for innovative, well-reasoned decisions. In his opinions he followed the principle that he had first stated in The Common Law— "the life of the law has not been logic, it has been experience." He rejected moral absolutes and rigid interpretation of legal precedent, insisting that the law has always evolved with society. Serving on the SJC at a time of rapid change in American society, he faced a variety of contemporary issues.

In his opinions he followed the principle that he had first stated in The Common Law— "the life of the law has not been logic, it has been experience."

In 1902 Massachusetts Senator Henry Cabot Lodge persuaded Theodore Roosevelt to appoint Holmes to the U.S. Supreme Court, a choice TR later had reason to regret. The "Great Dissenter," as Holmes was called for the minority opinions he frequently wrote, opposed much of the progressive economic legislation Roosevelt's administration proposed. The constitution," Holmes insisted, "does not embody a particular economic theory." A staunch defender of the First Amendment, he was a lonely voice for free speech during the Red Scare.

Holmes served as a Supreme Court Justice for 30 years, stepping down reluctantly at the age of 90. When he died in March of 1935, the whole nation mourned. His close friend and colleague Justice Louis Brandeis said simply, "And so the great man is gone."

The Justice from Beacon Hill: The Life and Times of Oliver Wendell Holmes, by Liva Baker (Harper Collins, 1991).

Dictionary of American Biography, Vol. 5 and Supplement One.