A CRIMSON DAHLIA, standing twelve feet high, is a very conspicuous object in the yard of Mr. Williams, 21 Liberty street, in this city.

COLORED HELP - A movement has been made to establish in this city a freedmen's home and intelligence office where colored help can be furnished. This is in accordance with desire of a number of citizens. Trustees have been appointed to act in the matter, and those interested are requested to reply at No. 244 Main street for further information.

FAST RUNNING - A young man in this city recently ran a half mile on the agricultural park, in 2:23, which is considered very good time.

THE FREEDMEN'S RELIEF SOCIETY will meet this afternoon at 2½ o'clock at Mrs. Wm. Brown's, No 17 Pearl street.

Teachers who went south after the war

I myself do not. However this is quite an interesting topic you present.

On this day in 1867, a Worcester newspaper announced that "in accordance with the desire of a number of citizens," a freedmens' office would be established to make it easy for white employers to hire African Americans, newly arrived from the South. As a result of contact with soldiers and teachers from Worcester County, escaping and emancipated black men and women gravitated to central Massachusetts. The city's black population doubled in the 1860s, and the Civil War-era migration continued into the late nineteenth century. With help from the northerners who had befriended them, the local African American community, and the area's abolitionists, the refugees began to build families and institutions. The cultural traditions these southern migrants brought with them made Worcester's small black community a vibrant one.

Union officers promptly employed the black refugees in a variety of jobs. A significant contingent worked as spies, scouts, and guides. 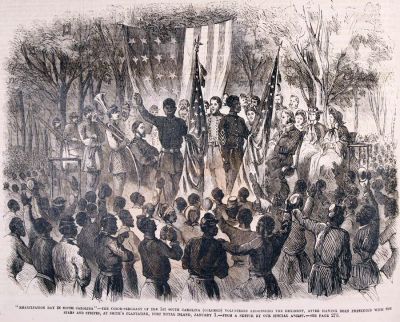 In the first two years of the Civil War, regiments of Worcester County men were deployed in the Upper South. After a successful campaign, the Massachusetts 25th controlled much of northeastern North Carolina. The Massachusetts 15th engaged in long costly battles in Virginia and Maryland. This was usually the first time these men came face to face with slavery. They also found themselves contending with a delicate political problem. From the outset, African Americans on both sides of the Mason-Dixon Line had regarded the war as a fight for freedom. Whenever northern troops appeared nearby, thousands of enslaved men, women, and children emancipated themselves, fleeing plantations and seeking refuge with the Union Army.

Unsure how to respond to this escaping Confederate "property," President Lincoln at first considered the fugitive slaves to be stolen goods, or "contraband." Then in 1862 Congress passed the Confiscation Act, freeing "from servitude the slaves of certain rebels engaged in or abetting the existing rebellion. . . ." Union officers promptly employed the black refugees in a variety of jobs. A significant contingent worked as spies, scouts, and guides. Some helped the Yankees navigate inland waterways. Others traveled behind Confederate lines, at great risk to their lives, to bring back information about enemy activity.

Efforts to help the contrabands began as soon as Union troops captured Confederate territory. In North Carolina, Horace James, chaplain in the Massachusetts 25th, set up evening schools where soldiers volunteered to teach the fugitives. Later, he appealed to fellow abolitionists back in Worcester to send missionary teachers and funds to support schools for freedpeople. He got such a good response that one soldier wrote home, "New Bern [N.C.] abounds with Worcester faces." The teachers formed relationships that facilitated African American migration to central Massachusetts.

Ties also developed between former enslaved men and the Union soldiers. Men in Worcester County regiments in the South befriended African Americans and helped them make their way to, and in, the North.

Once they reached Massachusetts, some free black men and women lived with and worked for the white people they had come to know in the South. Worcester's active anti-slavery community helped others find jobs and housing. The city's African American citizens were few in number — in 1862, there were scarcely 300 black residents in a city of 25,000 — but they provided significant assistance to the newcomers. Those who could afford it offered loans. Others helped with jobs and housing, sometimes sharing their own homes for a while. For example, in 1865, Elizabeth Mowbray, an African American who served as president of the Colored Freedmen's Aid Society, had seven southern refugees living in her Worcester home. The freedpeople themselves did everything they could to bring family and friends to the North.

"There are a few well-to-do colored men here," Rice continued, "but the majority are not prosperous."

With a few notable exceptions, the freedpeople who came to Worcester found it difficult to break out of subservient jobs. Even as local manufacturers expanded and factory owners complained of labor shortages, racism kept African Americans out of the city's industrial workforce. The next generation —the migrants' children and black southerners who came later in the nineteenth century — did not fare much better.

In 1893 local historian Franklin Rice wrote that "Negroes are not treated with the consideration they were before the war, when Worcester was thought a paradise for the fugitive from oppression." Nor were they being treated as well as the refugees who came in the 1860s. "There are a few well-to-do colored men here," Rice continued, "but the majority are not prosperous."

Nonetheless, the migration of black men and women from the South continued. While racism was hardly absent, Worcester offered higher wages than they could find in the South, and its public schools were integrated. Southern-born African Americans actively participated in existing black organizations, but, as historian Janette Greenwood explains, there was "a deep thirst on the part of Worcester's southern black migrants for their own culture and institutions. . . even in a very small black community." In 1886 they founded their own Baptist church. In five years, the original 12-member congregation grew to over 100. It survives today.

"Southern Black Migration and Community Building in the Era of the Civil War," by Janette Greenwood, in Faces of Community: Immigrant Massachusetts, 1860–2000, ed. by Reed Ueda and Conrad Edick Wright (Massachusetts Historical Society, 2003).

On this day in 1882, seven men took over 12 hours to cover the distance from Worcester to Boston in the nation's first 100-mile bicycle race. Boston was becoming the bicycle capital of America. Pedestrians...