I had my first birthday in Boston, and the next day I came to the Island. I have only one summer that I did not come here . . . And now, of course, I live here year-round. I write for the Gazette, you know, my Oak Bluffs column; I was the cashier at the Harborside, and I do my own writing. This is where I can write . . . .

We stood there, and I remember asking one of them, "When is the parade going to pass?" And they said, "There's no parade." Well, it was the first time I had seen a congregation of people idling on the street. Because in Boston, there are never any people idling in the streets, you see. But anyway, that was my introduction to Harlem. And I moved there about 1929 . . . .

Wherever I was, I did always want to come to the Vineyard and I finally moved her in the 1940s. I was in Europe a couple of times and whenever I thought of home – although this was still our summer home then – I thought about the Vineyard. I remember writing in the little journal I kept when I was touring in Russia. I wrote, "It's September first on the Island," and so forth, and, "What is this place compared to the Vineyard? Nothing, nothing!"

On this day in 1998, Dorothy West died on Martha's Vineyard. The Boston-born writer was the last living member of the Harlem Renaissance, a movement of African American artists, writers, and musicians that energized American culture in the 1920s. Although profoundly influenced by her years in New York, West was strongly tied to Massachusetts — to the exclusive society of Boston's "Black Brahmins" in which she was raised and to the Martha's Vineyard town of Oak Bluffs where she spent idyllic childhood summers and where she lived for the last half of her life. From her cottage in Oak Bluffs, the former Methodist revival camp that became the nation's first black resort, West wrote stories and novels that illuminated the class- and color-consciousness she observed first hand in African American society.

Dorothy began writing as a child; by the time she was a teenager, she was regularly winning short-story contests run by the Boston Post. 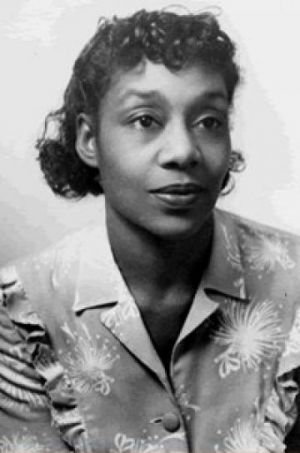 Dorothy West was born in Boston in 1907, the only child of Isaac and Rachel Benson West. Her father was a former slave from Virginia who built a successful business as a wholesale fruit merchant in downtown Boston. Her mother, many years younger than her father, was a beautiful light-skinned woman. Fearful that her looks would cause trouble with southern white men, Rachel Benson's family sent her north as a teenager. She married Isaac West and the couple settled in Massachusetts.

As the daughter of affluent and respected parents, young Dorothy earned easy acceptance into Boston's black elite. From her father she inherited her drive for success; from her mother, a fine sense of ironic humor she used to skewer upper-middle class African Americans who sought to distinguish themselves from "ordinary" people of color.

Dorothy had a privileged childhood. She excelled at the prestigious Girls' Latin School and attended Boston University. The Wests were one of the first black families to purchase a vacation home in Oak Bluffs on Martha's Vineyard. Dorothy West fell in love with the island as a young girl; she remembered her childhood summers there as an time of berry picking, band concerts, and visiting with friends. Surrounded by the educated, successful, and proud African Americans who came to Oak Bluffs, Dorothy could almost believe that cultural sophistication, affluence, and refined manners made it possible to overcome racism.

Surrounded by the educated, successful, and proud African Americans who came to Oak Bluffs, Dorothy could almost believe that cultural sophistication, affluence, and refined manners made it possible to overcome racism.

The Vineyard had a history as a refuge for people of color. When English explorer Bartholomew Gosnold first visited the island in 1602, nearly 3,000 Wampanoag Indians lived there, the highest concentration of native people anywhere in New England. Although disease soon drastically reduced those numbers, Indians continued to maintain a presence in Aquinnah, the section of the island near Gay Head. When English settlers brought African slaves to the Vineyard in the 1600 and 1700s, there was some intermarriage between Native and black people. As on Nantucket, the development of whaling on Martha's Vineyard gave people of color greater opportunities than they found on the mainland.

In the mid-1800s, Methodists attending annual revival meetings on the island erected a "tent city" and then a cluster of tent-like cottages. Incorporated as Cottage City in 1880 (it changed its name to Oak Bluffs in 1907), this was a community where it was''improper and illegal" "to make distinction among . . . tenants on the grounds of color." In the 1890s, a college-educated African American visited the island and stayed to open an inn catering to black guests. The town soon had a number of such establishments. (In fact, until the 1960s, Oak Bluffs had the only accommodations on the island that welcomed black guests.)

Incorporated as Cottage City in 1880 (it changed its name to Oak Bluffs in 1907), this was a community where it was''improper and illegal" "to make distinction among . . . tenants on the grounds of color."

When the island's economy declined with the demise of the whaling industry, blacks saw an opportunity to buy summer residences. By the turn of the century, Cottage City had become an exclusive retreat for well-to-do African Americans from Boston, New York, Philadelphia, and Washington. The picturesque town became the summer home of many of the nation's leading black businessmen, academics, politicians, dignitaries, writers, and artists. Young Dorothy West reveled in her summers there.

Dorothy began writing as a child; by the time she was a teenager, she was regularly winning short-story contests run by the Boston Post. At 17, her life was transformed when a New York magazine awarded a prize to her short story "The Typewriter." On her trip to the city to receive the award, she met the gifted African American writer Zora Neale Hurston, a leading member of the Harlem Renaissance. Hurston took West under her wing and introduced her to other black artists. They readily welcomed "The Kid," as they called her, into their circle.

When the Depression scattered the Harlem Renaissance artists, West stayed in New York, working on a journal of literary and social activism. She was hired by the Works Projects Administration Writer's Project and later became a welfare relief worker. When she decided to leave the city in 1943, it was to go "home" to Oak Bluffs.

While the work was critically acclaimed, a woman's magazine withdrew its offer to serialize the book when a survey showed that southern readers would cancel their subscriptions.

It was at Oak Bluffs in 1948 that West wrote her first novel, the autobiographical The Living is Easy. While the work was critically acclaimed, a woman's magazine withdrew its offer to serialize the book when a survey showed that southern readers would cancel their subscriptions. West settled into a quiet life in Oak Bluffs, writing regular columns and stories for the local newspaper. She did not write another novel for nearly 40 years until an encounter with Jacqueline Kennedy Onassis, who was working as an editor in New York, led to the publication of The Wedding in 1995.

Three years before her death in 1998, the collection of short stories that would be West's last book was published. Like her novels, the stories deal less with interracial conflict than with the ways color-consciousness and class, and gender differences shape the experience of upper- and middle-class African Americans. Like her novels, they have a strong sense of place, and that place is Massachusetts, specifically Boston and Martha's Vineyard.

The Living is Easy, by Dorothy West (Houghton Mifflin, 1948).