TREATY OF PEACE SIGNED AND ARRIVED.

Yesterday morning between seven and eight o’clock, an express arrived in 33 hours from New-York, bearing the following letter to Major Russell, announcing the important intelligence of the signing of a treaty of peace, between this country and Great Britain, on the 24th day of December last.

This joyful intelligence was brought to New-York by Mr. Carroll, a messenger from our Commissioners to government, who is bearer of the treaty. He is accompanied by Mr. Baker, agent for the British government, and both same passengers in the British sloop of war Favourite, which arrived at New-York on Saturday evening.

The news has been received here with every demonstration of joy. By order of the Selectmen, the bells were run through the day. All the mercantile streets and wharves were profusely ornamented with flags; all business was suspended, and nothing was heard but rejoicing and acclamations.

In the evening, the Exchange Coffee House, all the printing offices and many other buildings in Congress-street, and many houses in different parts of the town, were splendidly illuminated.

In the Legislature, a joint committee of the two Houses was appointed to report in what made that body may most suitably express their joy and gratitude at the happy event. . . .

And we think that the war in Iraq is divisive...

but the War of 1812 had predominantly Federalist New England close to seceding from the Union. Local men, preferably Republicans were recruited to fight with the ample use of rum and bonuses. Federalists were not really trusted to be in the army, even though Federalist officers in the navy achieved some of the most important victories. The land invasions of Canada were spectacularly unsuccessful. We have the papers of a local (Taunton-Easton-Stoughton)man, Samuel Hodges Jr, who was a recruiter for the War of 1812. His father ran a tavern-store on Bay Road in Easton and some serious recruiting revelry happened there. In the course of a letter to a Republican official, he describes one of the local Federalist candidates for office as "His Majesty's Mushroom." When the men Hodges recruits are called off to war, Hodges does not go with them because the Senate refuses to confirm his commission as an officer. Needless to say, the men are somewhat disgruntled and some desert. Others die in the army. Local Federalist historians describe Hodges as simply deciding he would rather live to fight another day, but newly found letters have revealed the denial of his commission. Instead he comes to Stoughton to work as a clerk in a new cotton mill and when that fails, (as do so many businesses after British goods reenter the market at war's end) he sails to Cape Verde, (a place where illegal slavers and legitimate merchants ply their trade) where he serves as US Consul, losing three infant children and eventually his own life to island fevers. Fortunately, Hodges, a compulsive record keeper, left a long paper trail. Some of his records are at AAS in Worcester, some at Peabody-Essex, and some with us at the Stoughton Historical Society. Dwight Mac Kerron
Emphasis

I think this article puts too much emphasis on impressment of sailors as a cause of the war and too little on Manifest Destiny. Impressment had been going on for years. The warhawks wanted Canadian land and New England paid the price for their expansionist greed.
Login

On this day in 1815, news reached Boston that the War of 1812 was over. The U.S. had at first been a neutral party in a conflict between Britain and France. But when the British Navy began seizing American sailors, the U.S. imposed an embargo and then declared war. Both actions had severe consequences for Massachusetts, which was dependent on maritime trade. Once the war began, the state's coastal towns — especially those on Cape Cod — came under attack from the Royal Navy. For two years, bombardment, invasion, looting, extortion, and hostage-taking were almost routine. Even today there are buildings in Falmouth that wear battle scars in the form of cannonball-sized holes.

When word reached Boston that Britain and the United States had signed a treaty to end the War of 1812, residents of coastal Massachusetts breathed a deep sigh of relief.

The fighting lasted over two years; during all that time, people along the coast had lived under constant threat of raids by British naval crews seeking provisions, munitions, and hostages. Local militias had done their best to defend their neighbors, but they were generally no match for the mighty British Navy.

Many villages and towns reluctantly gave British commanders huge sums of money to avoid bombardment. Other communities refused to meet the British demands, and some paid a high price for their defiance. When the Treaty of Ghent ended the British blockade, the Massachusetts coast was left with the scars, stories, and relics of warfare. 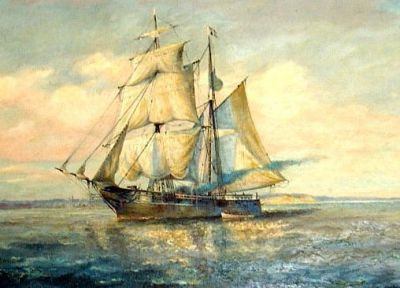 Massachusetts had suffered from Britain's naval supremacy even before the War of 1812. Much of the young state's economy depended on maritime trade between New England, the West Indies, and Europe. When war broke out once again between Great Britain and France in 1792, both European powers sought to disrupt each other's shipping.

Although the United States was initially a neutral party, the conflict seriously hindered Massachusetts trade. Conditions worsened when the British Navy began boarding U.S. merchant vessels and forcibly enlisting, or "impressing," sailors whom they claimed were British deserters. Outraged by this blatant disregard for its status as a sovereign nation, the U.S. government responded by imposing a trade embargo. The policy was unpopular and ineffective, and it had devastating consequences for the Massachusetts economy.

The residents of New England bore the brunt of the embargo, but they were not eager for war with Britain. They knew that the British Navy could easily blockade the coastline and choke off all trade. But "war hawks" in the southern and midwestern states took a different position. They wanted the U.S. to expand westward into areas that belonged to Britain and her allies. Using Britain's continued impressment of American sailors as their justification, they convinced President Madison to declare war. New Englanders' fears were soon realized, as their coastlines immediately came under attack.

The British raided Cape harbors and seized or burned boats almost at will.

Cape Cod was particularly vulnerable. The superior size and strength of the British Navy allowed it to blockade all of the ports on the Cape. Any ship that dared to run supplies or trade goods through the blockade risked being seized and its crew taken prisoner. The British raided Cape harbors and seized or burned boats almost at will. Sometimes landing parties ravaged the countryside, stealing crops and livestock. Militias that had last seen action during the Revolution were called upon to defend citizens and property as best they could.

British commanders did not hesitate to demand payment in exchange for holding off on an attack. Admiral Lord Howe sailed the H.M.S. Newcastle to Orleans on the Outer Cape; if the town did not pay $1,000, he promised to destroy the local saltworks. The neighboring towns of Eastham and Brewster had already paid substantial sums to save their saltworks, but Orleans refused. The Newcastle attacked. Fortunately for Orleans, the ship was too large to navigate the coastal marshes. Its cannonballs fell short. The local militia repelled an attempted landing and killed several British sailors; the town was saved.

Although the cannons of the Falmouth Artillery Company were little more than an irritant to the British, in January 1814 the H.M.S Nimrod was sent to silence them.

Falmouth was under almost constant attack. The town's strategic location allowed its guns to fire regularly on British ships passing along the Cape's southern shoreline. Although the cannons of the Falmouth Artillery Company were little more than an irritant to the British, in January 1814 the H.M.S Nimrod was sent to silence them.

On January 28th, the ship anchored off the coast of Falmouth, raised a flag of truce, and sent a boat ashore. The landing party "demanded the two field pieces [cannon] and a sloop lying at the wharf." Tradition has it that the Artillery Company commander replied, "If ye want the cannon, come and get them!"

The British responded that, if the town did not comply, the Nimrod would begin bombarding it within an hour. The British returned to their ship empty-handed, and the Battle of Falmouth began. The bombardment lasted all afternoon and evening. Although there was considerable confusion among the people and damage to the town,there were no casualties. On January 29th the Nimrod sailed west towards Rhode Island. A few months later, the Nimrod's cannon met a rather inglorious end. On June 13, 1814, the ship ran aground in Buzzards Bay. Desperate to lighten its load, the crew dropped some of the cannon overboard until the ship floated free. In 1987 a diving crew found five of the Nimrod's cannon in the bay. One was given to the Falmouth Historical Society, where it is on permanent display.

The collections of the Falmouth Museums on the Green, operated by the Falmouth Historical Society, include a recovered cannon from the H.M.S. Nimrod.

War of 1812: Items from the Collections of the Massachusetts Historical Society War of 1812 Military Records at National Archives

On this day in 1797, USS Constitution was launched in Boston. It took three attempts to set the immense ship, reinforced with heavy diagonal planking and copper sheathing, afloat. Shipyard officials warned townspeople to be...