Yt any p’son, eithr English or Indian, that shall kill any wolfe or wolves wthin ten miles of any plantation in ye jurisdiction, shall have for every wolfe by him or ym so kiled 10 shs to be paid out of ye treasure of ye country.

At a general meeting of the Towne [of Newbury] April 27th 1648 Ther was granted to Thomas Marvyn two acres of land lying neer to the new pond on the back side of Mr. Noyes house lott at the new Town for encouragement to him to kill woolves.

March 6, 1664-5. It was ordered that those wolves that hath bin killed since the six wolves order hath bin out, those that hath killed them shall have forty shillings for every wolfe for those that is past, and also such as shall kill wolves for the time to come shall have forty shillings for every wolfe to be paid out of the next Towne Rate after they shalbe killed provided that due proof be made that they be killed within the limitts of the Towne.

January 24, 1682-3, the freeholders and other inhabitants of the town voted

That whereas there was an order made and voted at a Generall meeting of the Town March 13, 1680-1 that gave to such persons as should kill wolves in the bounds of Newbury to have twenty shillings for every old wolfe and ten shillings for every young wolfe to be paid out of the Towne rate, and it was not found in the town books, the Town did confirm that order and gave order it should be recorded for it was endorsed by John Ordway and many others.

March 9, 1702-3 voted to pay four pounds to those who killed two wolves at the Ipswich end of Plum Island.

September 1, 1714, voted to pay forty shillings for every wolfe killed within the limits of the town.

May 3, 1715 voted to give five pounds per head for every grown wolfe which shall be killed within the town of Newbury.

March 13, 1721-22 It was voted that ye selectmen shall pay to Mark Moers & his brother Jonathan Moers twenty shillings equally between them for a gratification for killing a wolfe in Bradford this winter.

On this day in 1704, the town of Newbury voted to pay a bounty to men who had killed two wolves on Plum Island. Wolves were a threat to the cattle, sheep, and pigs grazing on the island, and town officials offered bounties to thin their population. This event is one of many recorded instances of human interaction with nature on Plum Island. In summer, farmers from nearby towns used the meadows for pasture; in winter, they fed their livestock salt hay harvested from the island's abundant marshes. Although Plum Island was rich in natural resources, the harsh winter weather meant that there were few year-round residents. When accommodations were built for summer visitors, development seemed inevitable. But then a group of bird lovers began buying and preserving land. Because of their efforts, Plum Island is today one of the top 10 birding areas in the United States.

In the eighteenth century, people infected with small pox were confined to the island's "Pest House," or quarantine hospital. 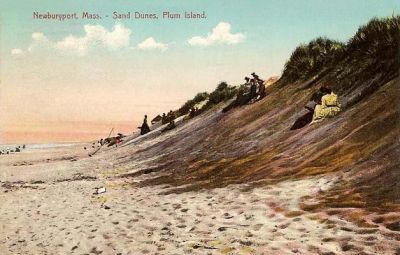 The English families that settled in Massachusetts in the 1600s sought to re-create the kind of farms they had known at home, but they immediately encountered a daunting problem. The land was mostly covered with forests. Even an energetic family could cut and clear only a few acres a year. Their livestock needed pasture to graze in the summer and hay to eat in the winter months.

In coastal areas, nature offered a solution. The salt marshes that were found along tidal rivers and behind barrier beaches did not require clearing or planting. Each summer they yielded a valuable crop of marsh hay. By the early 1700s, salt hay from Cape Cod and North Shore farms was being sold at Haymarket Square in Boston.

At the northeastern edge of Massachusetts, a 6,000-acre barrier island stretched from the mouth of the Merrimack to the mouth of the Ipswich River. Plum Island had such an abundance of salt marsh that, after the English arrived in the area, three towns claimed possession of the land. In 1649 the General Court resolved the dispute by granting two-fifths each to Ipswich and Newbury and one-fifth to Rowley.

Each spring, high tides briefly flood salt marshes, leaving behind rich silt that fertilizes the grass. For nearly 300 years, the summer harvest of salt hay on Plum Island was a communal ritual. From late June to September, the salt meadows came alive as workers cut and stacked the hay. Until special horseshoes were developed for marsh travel in the late nineteenth century, all of the work was done by hand. After the hay was cut, it was stacked on platforms raised above the high tide level. When the marsh froze, sleds and ox teams transported the hay to the mainland.

Plum Island had such an abundance of salt marsh that, after the English arrived in the area, three towns claimed possession of the land.

Salt hay was not Plum Island's only valuable natural resource. Trees growing on the upland areas were cut down for fuel. The island had natural cranberry bogs and riverbanks covered with thatch, which was used for roofing and insulation for houses and as bedding for both cattle and gardens.

Much of the land was naturally open, making it easy for farmers to graze livestock there. There were no fences on the island, and town records are full of complaints about roaming cattle, sheep, and pigs. Colonial farmers were aware that trampling and overgrazing could destroy the dunes and leave the salt meadows unprotected from ocean storms. On one occasion, Ipswich farmers complained that cows belonging to Newbury men were destroying the vegetation and "would be the ruin and utter destruction of the whole island." Another threat came from wolves that preyed on the grazing livestock. Town officials offered bounties for dead wolves on multiple occasions, as documented in Currier's History of Newbury.

While Plum Island's marshes were critical in sustaining local farmers, they may have been even more important as a feeding and resting area for migrating waterfowl and shore birds. The quantity and variety of birdlife on the island were astonishing. During one storm in November of 1733, a farmer recorded killing 60 wild geese.

150 years later, there was still a seemingly endless number of birds. In August of 1877, a local paper reported that in one afternoon a hunter "shot eighty birds, consisting of upland plovers, brown-backs, yellowlegs, snipes, and sand-peeps." In 1880 a hotel proprietor claimed that he killed "forty birds with only two discharges." Professional hunters, working from camps on the southern end of the island, harvested birds for the Boston market, where they were considered great delicacies.

Ipswich farmers complained that cows belonging to Newbury men were destroying the vegetation and "would be the ruin and utter destruction of the whole island."

While farmers, fishermen, and hunters relied on the resources of Plum Island, few chose to live there, at least full-time. Archaeological evidence suggests that local Indians had used the island for summer encampments, but the fierce winter winds kept the year-round population to a bare minimum. In the eighteenth century, people infected with small pox were confined to the island's "Pest House," or quarantine hospital. Captains arriving from foreign ports would drop off sick passengers or crew members and then wash their ships down with vinegar before proceeding to port.

In 1789 the Massachusetts legislature authorized, and the merchants of Newburyport paid for, the construction of two lighthouses on Plum Island, but the treacherous waters around the mouth of the Merrimack continued to cause shipwrecks. In 1871 the U.S. Life Saving Service assigned crews to two stations on the island. One historian recounts that "if the men spotted a ship in distress and the surf was not too heavy, they would launch a surfboat and attempt to row to its rescue." Most shipwrecks, however, occurred in weather too stormy for surfboats. "Then the men would heroically attempt to shoot a line to the floundering ship from a special projectile gun and haul sailors to safety. Their work, requiring great physical skill and endurance, saved countless lives over the years."

Plum Island was as appealing in the summer as it was forbidding in the winter. Steam-powered boats, new bridges, improved roads, and automobiles all made the island more accessible. Growing numbers of people came to vacation, hunt, or just picnic. The first hotel opened in 1806 when a group of Newburyport businessmen, hoping to develop the island as a resort, built a bridge from the mainland. By the mid-1800s, there were several hotels and private cottages catering to summer visitors, and sportsmen flooded into camps for seasonal hunting and fishing.

The very qualities that had made the island so attractive were now in danger of disappearing.

By the early twentieth century, technology had made it possible for people to live year-round in locations that had been previously considered uninhabitable. New homes were built upon Plum Island's fragile dunes, and real estate companies were planning ever more subdivisions. The very qualities that had made the island so attractive were now in danger of disappearing. Protection of the island began in 1929, when a bird lover left money to the Federation of Bird Clubs of New England to preserve animal and bird life in the Commonwealth. The bequest was used to purchase 600 acres on Plum Island for a bird sanctuary.

In the mid-1930s the Federation of Bird Clubs merged with the Massachusetts Audubon Society, and MAS greatly expanded the size of the sanctuary. In 1942 the federal government established the Parker River National Wildlife Refuge to provide feeding, nesting, and resting habitat for migratory birds. Today the refuge occupies the southern three-fourths of the island. Approximately 1,600 acres are undeveloped barrier island habitats (beach and dune, grassy uplands) and another 3,000 acres are salt marsh. Parker River is considered one of country's most productive, year-round, wildlife viewing areas. 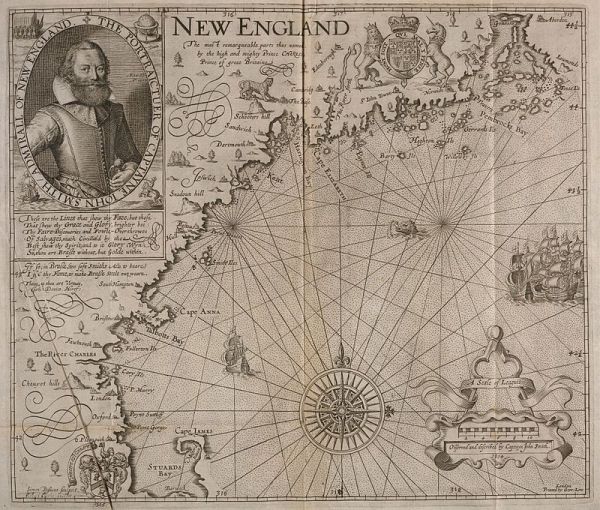 Plum Island is owned by the U.S Fish & Wildlife Service (4,662-acre Parker River National Wildlife Refuge) and the state Dept. of Conservation and Recreation (70-acre Sandy Point State Park at the southern tip of the island).

Plum Island is part of the Essex National Heritage Area.

A new Massachusetts Audubon Society Visitor Center is located at the gateway to Plum Island.

William Cronon's Changes in the Land: Indians, Colonists, and the Ecology of New England (New York: Hill and Wang, 1983) is a classic study of the interaction of humans and the environment in the early period of New England's European settlement.