The ten-cent wage cut imposed by the mill owners broke the camel's back — workers were real angry, and even though most of the workers were unorganized they poured out of the mills fighting made. They were fed up with the wage cuts and the speedups, and it was almost as if everything was organized beforehand, but it wasn't. When the Textile Council rejected the ten percent cut and announced that they were gonna strike, all the unskilled people that they paid no attention to got out there. And they became the made force of the strike.

Quoted in The Strike of '28, by Daniel Georgianna with Roberta Hazen Aaronson (Spinner Publications, 1993).

In the introduction, you say, " Although only members of the Textile Committee were permitted to cast votes,..." Don't you mean the Textile Council?
Uncorrected Error

Six years ago Joe Ross wrote: "In the introduction, you say, 'Although only members of the Textile Committee were permitted to cast votes,...' Don't you mean the Textile Council?" Yes, that's what you meant. Now change it already!
Uncorrected Error

Try to send them a message directly. Otherwise it can last a long time.
Login

On this day in 1928, after a bitter six-month strike, the members of New Bedford's Textile Council voted to accept a compromise offer. Faced with overproduction and falling profits, the mill owners had imposed a ten percent pay cut. Both the moderate Textile Council, to which skilled mill workers belonged, and the radical Textile Mill Committee, which included many unskilled immigrant laborers, responded by going out on strike. At first, the strike felt like a holiday. But as the months passed, and strikers faced a hungry winter, pressure increased to settle. In late September, the mill owners proposed a five percent cut. Although only members of the Textile Committee were permitted to cast votes, their acceptance of the deal brought an end to the strike.

As the strike dragged on, tensions mounted. New Bedford police were initially tolerant of picketers, but as crowds grew larger and rowdier, arrests, primarily of TMC strikers, became more common. 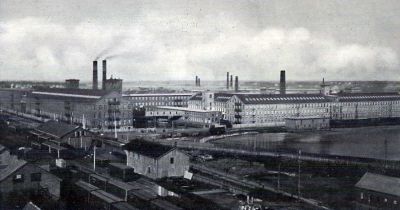 In the years during and just after World War I, New England's textile industry prospered. The old whaling port of New Bedford had become one of the state's success stories. From 1913 to 1920, its 30,000 textile workers saw their wages triple. Small businesses and local banks thrived as workers spent and saved their earnings. This prosperity was good for organized labor, too. Most skilled English and Anglo-American weavers and loomfixers joined the Textile Council, a federation of local textile craft unions founded in the late nineteenth century. As the Council developed relationships with the business community and with local and state government officials, it earned the respect of both mill owners and the press.

In the 1920s, the growth that had followed the end of WW I slowed, and overproduction caused prices to fall. In 1928 the Manufacturers' Association tried a voluntary effort to cut back production by 20 percent, but New Bedford mill owners were hesitant to comply. Instead, on April 9, 1928, they asked the workers to take a 10 percent pay cut to improve the industry's competitive position.

The outraged young leader of the Textile Council, William Batty, immediately called for a strike to protest the cut. He realized that this would be a gamble; only a small percentage of mill workers actually belonged to the union, which had long excluded unskilled Portuguese and Polish immigrant workers from membership. But he took a chance that the unorganized workers would follow union members out on strike.

The risk paid off. On April 16th, the first day of the strike, scarcely any workers entered the mills. All three of the city's newspapers came out in opposition to the wage cut, running editorials calling for state intervention. A sense of celebration marked the informal pickets at the mill gates; strikers wore their best clothes and brought picnic breakfasts. That afternoon, New Bedford's movie theaters reported record crowds. For people who had worked nearly every day in the mills since the age of 12 or 13, the early days of the strike brought a welcome change in routine.

But the strike soon lost its air of festivity. Although initially the striking workers seemed unified, divisions soon became apparent. The 20,000 immigrant workers excluded from the Textile Council joined the Textile Mill Committees, a militant labor organization two avowed communists had established in 1926. The TMC sought to unite all textile workers. Under the TMC banner, the Polish and Portuguese workers played a more active role in the strike than immigrant workers usually did.

For people who had worked nearly every day in the mills since the age of 12 or 13, the early days of the strike brought a welcome change in routine.

Rather than simply protesting the wage cut, the TMC demanded a 20 percent increase in wages, a 40-hour workweek, equal pay for equal work, an end to child labor, and no retribution against union members. While both the TMC and the Textile Council were fighting the mill owners, William Batty believed that the TMC's overly ambitious goals hurt workers' ultimate chances of success; furthermore, he regarded the Textile Mill Committee as a threat to the Council's social, political, and economic clout. Newspapers and government officials, alarmed by the communist views of the TMC's leadership, sided with Batty. Large numbers of Polish and Portuguese workers continued to support the TMC, although they acted more from loyalty to a group they believed represented their interests, rather than to the union's communist leadership.

As the strike dragged on, tensions mounted. New Bedford police were initially tolerant of picketers, but as crowds grew larger and rowdier, arrests, primarily of TMC strikers, became more common. At the end of May, a Citizens' Mediation Committee convinced mill owners to meet with the Textile Council to discuss a compromise. Nothing came from the meeting, but the TMC, excluded from the negotiations, stepped up picketing to show that the strike could not be settled without its cooperation.

Large numbers of Polish and Portuguese workers continued to support the TMC, although they acted more from loyalty to a group they believed represented their interests, rather than to the union's communist leadership.

By August, the Textile Council, realizing that its members were falling into dire poverty, began to court the mill owners, who were also suffering from heavy financial losses. Both the Council and the owners now regarded the TMC as the enemy; they consistently excluded it from their meetings believing that a two-way settlement was the best way to eliminate the militant group.

On September 25th, the Manufacturers' Association (representing the mill owners) proposed a compromise: a five percent wage cut. The city's newspapers endorsed the proposal, although conceding it was less than ideal. The TMC immediately denounced it as a "sell out." On Monday, October 1st, about 2,000 members of the Council's unions voted against the five percent compromise, and it was rejected.

While the TMC rejoiced, the city's newspapers turned against the Council, blaming it for prolonging the strike. They called for another vote, claiming that there had been confusion about the time for voting. Worried about losing the support of the press, Council leaders complied. On October 6th, a second vote was taken. This time police supervised each polling area, keeping TMC protesters away. With similar numbers voting, the proposal passed.

Although the TMC vowed to keep the mills closed on its own, thousands of workers reported to their old posts on October 8th. The New Bedford strike was over at last, and for most that was cause enough for celebration.

The Strike of '28, by Daniel Georgianna with Roberta Hazen Aaronson (Spinner Publications, 1993).

Bell and Watson Communicate by Telephone for the First Time