Now let me ask you, white man, if it is a disgrace for to eat, drink, and sleep with the image of God, or sit, or walk and talk with them. Or have you the folly to think that the white man, being one in fifteen or sixteen, are the only beloved images of God? Assemble all nations together in your imagination, and then let the whites be seated among them. . . . Now suppose these skins were put together, and each skin had its national crimes written upon it—which skin do you think would have the greatest? I will ask one question more. Can you charge the Indians with robbing a nation almost of their whole continent, and murdering their women and children, and then depriving the remainder of their lawful rights, that nature and God require them to have? And to cap the climax, rob another nation to till their grounds and welter out their days under the lash with hunger and fatigue. . . . I should look at all the skins, and I know that when I cast my eye upon that white skin, and if I saw those crimes written upon it, I should enter my protest against it immediately . . . .

Quoted in On Our Own Ground: The Complete Writings of William Apess, a Pequot, ed. by Barry O'Connell (University of Massachusetts Press, 1992).

Ranta, Judith A. "The Life and Writings of Betsey Chamberlain: Native American Mill Worker." Northeastern University Press: 2003. Betsey Guppy Chamberlain (1797-1886) was many different things: a wife, a mother, a humorist, a feminist and one of the first Native women writers. She was born about 1797 in Wolfeboro, New Hampshire on the shore of Lake Winnipesaukee. Chamberlain was of English and Algonkian (most likely Narragansett or Abenaki) descent. She used four pen names, married four times, used five surnames, and relocated from New England to the Midwest. At one point in her life Ms. Chamberlain lived in Lowell, Massachusetts and worked in the textile mills. There she wrote stories and sketches for two workers magazines "The Lowell Offering" and "The New England Offering." Thirty-four of these short pieces are collected in this book, along with an extensive biography and historic and literary analysis of the writings.
William Apes Family

Hi Mark. If William Apes is your great great grandfather then you are most likely a relative of mine. I have some documentation on William Apes and his journey to New Zealand. Do you have an email address that i can contact you with?
William Apes Family

In some of the documents i have found, your grandfather was a son of William and Kathleen. My great grandfather James (Tiemi) Apes and your grandfather Robert Apes are brothers but have different mothers. If you're interested, i can copy these documents and send them to you. I'd love to get to know my family.
William Apes Family

HI & thanks for reply. Thats quite exciting. I had wrong email so never got notice u replied. yes Robert Apes is my grandfather & i have proven the link to him & williams son william elijah whom married Mata punahere in newzealand around 1840 please contact via email - marknmariet@hotmail.com
William Apes Family

great pic of Tiemi by the way.
Thanks!

On this day in 1798, a member of the Pequot tribe named William Apess was born in Colrain, a village in western Massachusetts. Although his childhood was marked by poverty and abuse, he learned to read and write. After converting to Christianity, Apess became a traveling preacher. He sought to convert other Native Americans to Christianity and to convince white people to recognize his people as equal members of the family of God. In his thirties, he moved to Cape Cod, where he helped the Mashpee tribe regain a measure of self-government. William Apess published five books, including an autobiography. He disappeared from the historical record until his obituary was published in 1839 in a New York paper. Fortunately, his published works have allowed his story to survive in his own words.

He gave expression to the peoples' discontent and helped them draft an "Indian Declaration of Independence" addressed to the Governor of Massachusetts and signed by nearly 100 men and women. 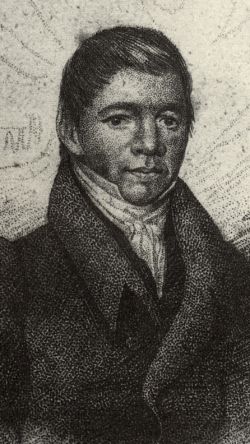 On January 31, 1798, a Pequot Indian named William Apess was born in a small farming village on the Massachusetts-Vermont border. The date of his birth appears in no public records; births, marriages, and deaths of white New Englanders were almost always recorded in church and town record books. Not so for Indians and other people of color. Nor are they often found in the census, tax roles, and other written records. We know about William Apess's life mainly because he left behind his own account of it. When he was 31 years old, he was the first American Indian to have his autobiography published. Four other books on the Native American experience and evangelical Christianity followed.

William Apess's early life was marked by poverty, abandonment, and domestic violence. Like most poor people in the early nineteenth century, the Apess family owned little, and moved a lot, looking for work or evading debt. He was only three when his parents quarreled and separated, leaving William and his siblings with their grandparents. The couple could barely afford to feed or clothe the children; even blankets were in short supply. The children's alcoholic grandmother abused them; on one occasion, she beat William so severely that he almost died. After that, a neighbor took him in as an indentured servant. He was to work until the age of 21 in exchange for food, clothing, a place to live, basic schooling, and a Christian upbringing.

When he was 31 years old, he was the first American Indian to have his autobiography published.

From the age of six until he was 12, William Apess lived in relative comfort. But then his original master sold his indenture contract. William was uprooted and, for the next few years, he moved from one household to another, never being treated very well. He began to attend Methodist services, and at age 15, joined the church. With its emotional revival meetings and message of hope, Methodism was attractive to Apess and many other poor people. More established churches considered it a dangerous form of religious fanaticism. When his conservative master became enraged at William's devotion to the new sect of Methodism, Apess fled.

He served in a militia unit in the War of 1812, and then wandered through New England and eastern Canada, sometimes alone, sometimes in the company of other Native Americans. By his own account, he was often drunk. In 1820, he finally returned to Colrain and to his religious faith. He married and he gave up alcohol. He considered his addiction to rum one of his greatest stumbling blocks, and he saw sobriety as one of the greatest blessings of his faith at work

Feeling that God had called him to preach to native people, he began traveling through Massachusetts and Rhode Island. Apess sought to convert other Indians to Christianity, but he also wanted white people to see Indians as their Christian brothers and sisters, equal members of the family of God. He later wrote, "I felt convinced that Christ died for all mankind — that age, sect, color, country, or situation made no difference."

He considered his addiction to rum one of his greatest stumbling blocks, and he saw sobriety as one of the greatest blessings of his faith at work.

William Apess not only knew how to read and write; he knew how to employ the language and images of Christianity and of republicanism to show the injustice of racial discrimination and the hypocrisy of white Americans. The eloquence of expression and subtlety of argument in his speeches and books countered the stereotype of Indians as ignorant, primitive people unworthy of citizenship.

William Apess eventually made his way to Mashpee on Cape Cod, where the Native people were struggling to keep control of their land and natural resources. He gave expression to the peoples' discontent and helped them draft an "Indian Declaration of Independence" addressed to the Governor of Massachusetts and signed by nearly 100 men and women. In this document, Apess again appropriated the language of republican patriotism to assert the rights of Native Americans.

"Is it right to hold and promote prejudices? If not, why not put them all away."

After leading a group of Indians in an effort to stop white men from cutting wood on native land, Apes was arrested and sentenced to 30 days in jail. The local whites considered him a dangerous agitator, but sympathetic newspaper accounts won him considerable sympathy. In 1834, a new governor supported a law that gave the Mashpee Indians the same right of self-government as other Massachusetts citizens.

Apess and his family remained among the Mashpee for several years. He published his last work in 1837 and then disappeared from public record until his obituary appeared in a New York City newspaper in 1839. Fortunately, his published words live on: "Having a desire to place a few things before my fellow creatures who are traveling with me to the grave, and to that God who is the maker and preserver both of the white man and the Indian, whose abilities are the same and who are to be judged by one God, who will show no favor to outward appearances but will judge righteousness — now I ask if degradation has not been heaped long enough upon the Indians? . . . Is it right to hold and promote prejudices? If not, why not put them all away."

This Mass Moment occurred in the Southeast and Western regions of Massachusetts.

Full text of William Apess's "Eulogy on King Phillip" is located on the University of Maryland's Voices of Democracy website: voicesofdemocracy.umd.edu/apess-eulogy-speech-text/. A complementary essay by Patricia Bissell of the College of Holy Cross may be found here: archive.vod.umd.edu/civil/apessint.htm

On Our Own Ground: The Complete Writings of William Apess, a Pequot, ed. by Barry O'Connell. (University of Massachusetts Press, 1992).

On this day in 1675, Wampanoag warriors killed seven colonists in Swansea in retaliation for a series of injustices suffered at the hands of the English. This raid is generally considered the beginning of King...