At the foot of the entrance staircases (at the Boylston Street and Park Street Stations) are offices at which the admission of five cents must be paid, for which a subway check will be issued, which will be good only on cars taken in the subway and will be void if carried form the subway without using.

Subway checks cannot be purchased in advance for subsequent use.

On arrival at Park Street station, passengers who wish to remain on the cars for the return trip may do so upon payment of another fare.

To avoid accidents, persons carrying long or bulky articles, such as molding, pipes, etc., will not be permitted to enter the subway.

The admission of dogs is prohibited, also the sale of newspapers or other merchandise on cars, within the subway or on the station stairways.

Facts have been altered to reflect suggestions. Thank you!
Login

On this day in 1897, at 6 am, over 100 people crowded onto the first train to travel through a tunnel under downtown Boston. More than 100,000 people would take the three-and-a-half minute trip that day. They were riding on the first subway line in the United States. After considering various alternatives to ease congestion on Boston's streets, city officials decided to follow the example of London, Glasgow, and Budapest and build an underground system. Within a year, passengers could get on and off the subway at Boylston Street, Park Street, Scollay Square, Adams Square, and Haymarket. In time, the route would be connected to the Boston Elevated Railway, creating the public transportation system that was the precursor to today's "T." 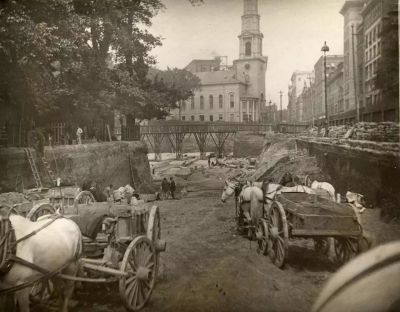 When the first subway car pulled out of Park Street Station, it may have seemed to Bostonians as though underground transit was the obvious solution to the city's growing traffic congestion. In fact, there were several other proposals, including streetcars using open trenches to access the Common.

When the Boston Transit Commission determined that a subway system would be best, the legislature appropriated $5,000,000; construction began on March 28, 1895.

To complete the daunting task, the engineers combined the deep underground "tube" style of construction pioneered in London with the open excavation method used in Paris. In this new "cut-and-cover" technique, workers supported the walls of a freshly dug trench with temporary wooden braces. Once the trench was deep enough, the walls and floor — made of concrete, steel beams, and waterproof grout — were added. Finally, the roof of the tunnel was made by building brick arches between steel support beams. The upper surface was then finished with a layer of concrete and soil. This system would soon become standard practice in nearly all American subway construction.

To complete the daunting task, the engineers combined the deep underground "tube" style of construction pioneered in London with the open excavation method used in Paris. 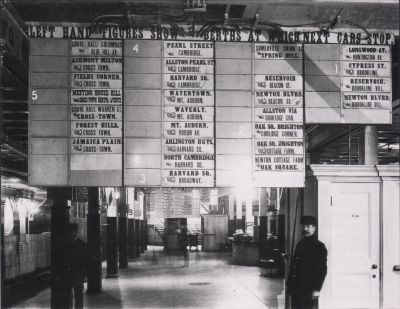 The process did not go entirely as planned. The first section was laid out along the edge of the Old Common Burial Ground. Workers saw only a few gravestones as they began digging, but they would eventually unearth the remains of over 900 unmarked graves, an unsettling discovery. The Boston Post jumped on the story, running it under the headline "Hideous Germs Lurk in Underground Air" with an illustration of a large, scary-looking "subway microbe." The pastor of the Park Street Church,called the subway "an infernal hole" and "an un-Christian outrage" when a water main ruptured, coating his office with mud. "Who?" he asked from the pulpit, "is the Boss in charge of the work? It is the Devil!"

Despite this and other setbacks, including an explosion at Boylston and Tremont Streets that killed nine men, construction continued, and the project was finished early and under-budget. The Boston Globe reported "nearly everything went as smooth as the proverbial clockwork, and the opinion heard on all sides was that, as far as it goes, the subway is an unqualified success." The best part was the lack of congestion on Tremont Street due to "the ease and speed with which the hitherto snaillike electrics on Tremont Street now glide through the underground passage."

The Boston Post jumped on the story, running it under the headline "Hideous Germs Lurk in Underground Air" with an illustration of a large, scary-looking "subway microbe."

The Boston Elevated Railway Company, which built and operated the system, quickly integrated the new underground trains with the elevated lines it was building at the same time. When the Company's Main Line Elevated opened in 1901, it connected to the Tremont Street subway, creating an efficient system of public transportation in downtown Boston.

It was not long before other American cities followed Boston's example. New York opened nearly nine miles of subway in October 1904. Philadelphia's system was built between 1905 and 1908; it combined underground, surface, and elevated lines just as Boston's did.

The Tremont Street Subway was only the beginning. Although the growing popularity of the automobile would eventually cut into ridership on the El and the subway, the T would remain one of Boston's greatest assets. By the end of the 1970s, the T was transporting 300,000 passengers daily. Today the T serves over 1.3 million passengers daily across the system.

Park Street and Boylston Stations on the MBTA Green Line are the original end points for the Tremont Street Railway.

100 Years of the Tremont Street Subway, by Scott Moore.

"The Chronicle of the Boston Transit System."

An excerpt from Most's book appeared in the Boston Globe Magazine.

On this day in 2004, Boston's last elevated train pulled into North Station. For over a century, Bostonians had avoided the congested streets below by riding trains carried on huge steel tracks overhead. When the...