PUT UP THOSE CLUBS! Order of Police to Golfers at Country Club.

Sunday golf playing at the Country club was brought to an end yesterday forenoon in a decidedly abrupt manner by the Brookline police.

For some weeks past it has been the custom of several members of the swell Brookline club to spend Sunday morning playing the game lately introduced into this country, and Brookline residents have objected. No complaint was made, and the objection consisted of more or less gossip among the residents who live in the neighborhood of the club. Yesterday morning the matter reached a climax when a prominent resident passed the club grounds on his way to church. The game was being played and several people were looking on.

Without entering any protest the church member in question—the name of whom the police decline to give—drove to the police station. He told Capt. Bowman that golf was being played on the Country club grounds, which was prohibited by the “Sunday law,” and requested him to take immediate steps to stop it.

Capt Bowman called up the club on the telephone, and informed the superintendent of the grounds that members of the club were violating a town ordinance, and told them to stop playing at once.

A few minutes later he received word that the game had been stopped and a voluntary statement that there would be no more playing.

Then Capt Bowman, bent on ascertaining if his orders had been complied with, detailed a couple of patrolmen dressed in citizens clothes to go to the club grounds and investigate. On returning they said that “everything around the club was as quiet as a church.”

In the meantime Capt Bowman was in communication with several of the directors of the club. He informed them that the “Sunday law” had been violated, that a complaint had been made to him, and obtained their word there would be no cause for action on his part.

Is it the First?

According to Mass.gov: The Country Club in Brookline became the first country club in America dedicated to "outdoor pursuits". Whatever that means... and they date it as 1881 http://www.mass.gov/statehouse/firsts_1800.htm
Is it the First?

That was also the mission of the Vesper Country Club! I think the historians blew it. Perhaps because Boston and its elite were better known, Brookline Contry Club got more attention.
Is it the First?

Myopia Hunt Club has long claimed that it opened before Brookline. However, it soon moved up to Hamilton.
Vesper Country Club History

I have been trying to determine, through the web, as well as via personal contact with members and guests but I can't seem to get a consensus of what the old US Open layout was, compared to what it is today for the Championship course. Here is what I know. The modern Open layout uses holes 1-8 and 14-18 from the Main course. After 8, it uses the main 11 as 9, the main 13 as 10 (with the Primrose #3 tee box acting as the tee box for the Open 10). It then uses the Primrose #1 as the Open 11, but it disregards the green of the Primrose #1 in favor of the Primrose #2's green. It then uses the Primrose #8 as the Open 12 and finally the Primrose #9 as the Open 13th before picking up the remainder 14-18th holes. My question is this, what layout did the 1913 US Open use? From reading the book, I gathered that holes 1-8 remain the same and that the Main Par 5 11th was still used as the 1913 Open 9th, as it is today. After this, it gets quite cloudy. There is mention of a par 3 after this so I assume they used the current day Main #12 as the old Open 10th. But the 11th through 13th are not quite the same in the book as they are on the modern day Open. I also do not know if the Primrose existed back then so what holes were used for 11-13 back then? I would assume that the modern main 13th was the old Open 11th (today it is the Open's 10th). That leaves the 12th and 13th and since you are standing on the Main 13th/modern Open 10th/Old Open 11th, where do you go from there? Someone please help!!
Old v New Brookline layout

I think I have found the answer to my own question. I was confused as to where the players went after finishing #11 on the old Open layout. Basically, after 11 (which is the modern day 13), they go up the hill, past the 14th tee box and play the modern #9 & #10 from today's normal layout. They are played as 12 and 13 which brings them back to the original 14th.
Login

On this day in 1882, a group of men from the social elite of Boston formally established The Country Club of Brookline, the first such club in the United States. Only four miles from the center of Boston, Brookline attracted well-to-do families who could afford to get away from the city for the summer. After the Civil War, many of these families turned their summer retreats into year-round suburban residences. Country clubs offered horseback riding, shooting, tennis, and the newest sport, golf, in a pastoral setting not far from home. Unlike downtown city clubs, which were restricted to men, country clubs also allowed wives and children to participate in their activities. But not all families were welcome. Membership was by invitation only.

Initially playing golf was not allowed under Massachusetts blue laws. 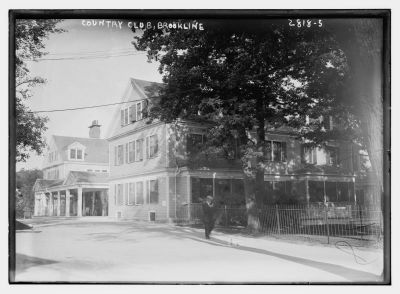 In January of 1882, a group of wealthy men from the Boston area established the first country club in the United States, The Country Club of Brookline.

In the second half of the nineteenth century, growing numbers of affluent families moved out of Boston to newly developed suburbs like Brookline. By 1880, men who spent their days working in the city's banks, law offices, and businesses might have lunch in a downtown men's club, but they were choosing to spend their evenings and weekends in greener settings.

Brookline's location made the town attractive to wealthy families looking to move away from the city and its problems. The exodus began in the 1840s when well-to-do urbanites started spending summers "in the country." After the Civil War, summer retreats were transformed into year-round residences. New trolley and train lines made it possible for businessmen to live in the suburbs and work in the city.

In the early years, some members of The Country Club objected to the "ruthless cutting down of fine trees to satisfy the whim of the Golf Committee."

As Brookline grew, its prosperous residents created a new kind of social club to meet their changing needs — the country club. Here, they could demonstrate their affluence and refinement by engaging in elite pursuits such as fox hunting, horse racing, ice skating, tennis, and, later, golf close to home.

While downtown men's clubs were exclusively male, country clubs allowed women to spend leisure time with their husbands. Few if any country clubs accorded women full membership privileges, but wives and daughters were permitted to participate in many of the club's activities, although in some cases — on the golf course, for example — they did so only in all-female groups.

As a place where men, women, and children socialized together, the country club represented the ideal of upper middle-class family life. Writers praised the wholesome atmosphere and claimed the country club was the perfect antidote to the competitive, commercial nature of urban life.

Although wealth was necessary, it did not guarantee membership. One had to be invited to join.

The country club also offered exclusivity. Although wealth was necessary, it did not guarantee membership. One had to be invited to join. This allowed the elite to exclude people whose social, ethnic, religious, or racial background made them unacceptable companions on the golf course or in the dining room. The restrictive policies of most country clubs, which excluded Jews, Catholics, and African Americans from membership, remained in place into the late twentieth century and are informally in effect at many clubs even today.

In 1882, a member of one of Boston's wealthiest families, J. Murray Forbes, organized a group of his friends to acquire a rolling expanse of land in Brookline. They renovated a farmhouse into an elegant clubhouse with dining, card and billiard rooms, and accommodations for those who wished to sleep over.

They built a track for horse racing, grass tennis courts, a bowling alley, and polo fields. They organized a variety of activities — from skeet shooting to afternoon concerts — and then invited prospective members to join them in their pastoral paradise — after, of course, paying an initiation fee and membership dues of $50 a year (the equivalent of about $1,000 today).

They called the golfers "idiots intent on chasing a Quinine pill around a cow pasture."

The early days of The Country Club at Brookline were marked by conflict as well as congeniality. Devotees of the new game of golf defied the state's blue laws to play on Sundays, generating complaints that the game was corrupting public morals. One Sunday, over 30 members were arrested and hauled off to court. Soon afterwards, the club's influential members helped persuade the legislature to lift the Sunday ban.

There was also friction between the equestrians and the growing number of golfers. Because land was limited, the original golfcourse overlapped the horse track. The horse lovers were incensed when golf balls whizzed over their heads. They called the golfers "idiots intent on chasing a Quinine pill around a cow pasture." When the course was expanded to 18 holes in 1899, the club's horse racing, polo, and trapshooting enthusiasts objected to the "ruthless cutting down of fine trees to satisfy the whim of the Golf Committee."

As the Brookline club worked out this and other issues, it provided a model for similar clubs that were cropping up around the nation. By the turn of the century, there were over 1,000 country clubs in the U.S., with at least one in every state and territory.

The Greatest Game Ever Played: Harry Vardon, Francis Ouimet, and the Birth of Modern Golf, by Mark Frost (Hyperion, 2002).

On this day in 1902, the writer Edith Wharton wrote to a friend about a visit to the site of her new home, The Mount, under construction in Lenox: "Lenox has had its usual tonic...

On this day in 1913, at The Country Club in Brookline, 20-year-old Francis Ouimet became the first amateur to win the U.S. Open Golf Tournament. Growing up in an immigrant family across the street from...