In 1647, John Winthrop described in his journal the Rev. John Eliot's "methods of instructing Indians."

[Eliot's] manner of proceeding was thus; he would persuade one of the other elders or some magistrate to begin the exercise with prayer in English; then he took a text, and read it first in the Indian language, and after in English; then he preached to them in Indian about an hour; (but first I should have spoke of the catechising their children, who were soon brought to answer him some short questions, whereupon he gave each of them an apple or a cake), then he demanded of some of the chiefs, if they understood him; if they answered, yea, then he asked them if they had any questions to propound. And they had usually two or three more questions, which he did resolve…

[One] question was, what was the reason, that when all Englishmen did know God, yet some of them were poor. His answer was, 1. that God knows it is better for his children to be good than be rich; he knows withal, that if some of them had riches, they would abuse them, and wax proud and wanton, etc.. therefore he gives them no more riches than may be needful for them, that they may be kept from pride, etc. to depend upon him, 2. he would hereby have men know, that he hath better blessings to bestow upon good men than riches, etc., and that their best portion is in heaven, etc.

[Another] question was, if a man had two wives, (which was ordinary with them), seeing he must put away one, which he should put away. To this it was answered, that by the law of God the first is the true wife, and the other is no wife; but if such a case fell out, they should then repair to the magistrates, and they would direct them what to do, for it might be, that the first wife might be an adulteress, etc., and then she was to be put away.

When all their questions were resolved, he concluded with prayer in the Indian language.

"In October, the English sent all the remaining Native people in Natick to an island in Boston Harbor. Deprived of sufficient food, shelter, fuel, and clothing, many died there." Could you please clarify on which of Boston Harbor's many islands this occurred? Thank you!

Our historian has confirmed that it was Deer Island and that fact has been added to the essay.  Thank you for your question!

On this day in 1781, Natick was formally incorporated, but the town already had a long history. In 1651, a group of Christianized Indians had founded a "Praying Town" in what is now South Natick. Led by the missionary John Eliot, the Indians built an English-style village. For 25 years the town prospered. Then, with the outbreak of King Philip's War, the colonial authorities imprisoned all Christianized Indians on an island in Boston Harbor. After the war, the Natick Indians struggled to re-establish their community. They failed, but their history was not forgotten. In 2001, the people of Natick observed the 350th anniversary of the "Praying Indian" settlement that gave birth to their town. 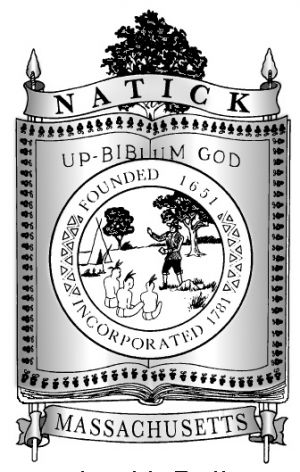 The charter of the first English settlers in Massachusetts Bay Colony was "to win and incite the natives of [the] country to the knowledge and obedience of the only true God and Savior of mankind, and the Christian father."

The Puritan minister John Eliot, who arrived in Boston in 1631, took those words to heart. Every time he saw the colony seal, showing an Indian imploring the English to "Come over and help us," he felt moved by "pity for the poor Indians." In 1641, Eliot began what would become his life work.

There were few ministers willing to face the challenges of serving Native people. Christian faith was grounded in the Bible; the Algonquian language spoken by the Indians did not exist in written form. Ministers would need to learn Algonquian, then devise a way to write it, produce a translation of the Bible and finally teach the Indians to read. Indian converts would also have to be persuaded to disregard their traditional spiritual advisors or "sachems."

Furthermore, the Puritans believed that Indians needed to be "civilized." In their minds, this meant adopting European habits of dress and building English-style meetinghouses, schools, and homes. The Native people would have to give up their traditional ways and farm the land the way Englishmen did. They would also have to govern themselves according to laws that reflected Christian principles and live in a permanent community with a church at its center.

Eliot believed that for the Indians to become "real" Christians, they needed a village of their own.

John Eliot found an interpreter to help him preach and then to teach him the local Algonquian dialect. Soon he had mastered the language and developed a written form of Algonquin. He translated the Bible so he could catechize the Indians.

Eliot believed that for the Indians to become "real" Christians, they needed a village of their own. In 1650, he and a group of Indian converts located a site that offered fresh water, fertile fields, and woodland on the Charles River 17 miles west of Boston. The next spring, the Massachusetts General Court officially granted Eliot's "Praying Indians" 2,000 acres in what is now South Natick. Eliot also sought and received rights to the land from the original Indian owner, who then joined the new community.

The Natick Indians built a round stockaded fort to protect themselves from hostile tribes; an English-style meetinghouse and a school followed. They laid out house lots along three long streets. In the spring they planted apple orchards, sowed corn, and set fish traps in the river.

A council of men governed the town according to Biblical precedent rather than tribal laws. When the colony's governor visited Natick in the fall of 1651, he was impressed; he declared, "The Foundation is laid, and such a one that I verily believe the gates of Hell shall never prevail against."

"The Foundation is laid, and such a one that I verily believe the gates of Hell shall never prevail against."

The next year, Eliot believed that he had enough true converts to establish a church. A group of ministers sent from Boston to examine the Indians did not agree. After hearing their confessions of faith, the ministers concluded that more time and instruction were needed. Disappointed, John Eliot and the Indians returned to their studies.

It was another three years before the Boston ministers determined that the Indians' faith and understanding were sufficient. A church was finally founded in 1660, the first Indian Christian church in the English colonies.

The outbreak of King Philip's War in the summer of 1675 brought a violent end to the success of the Indian experiment. Some of the Natick Indians sided with King Philip; even those who did not came under suspicion. In October, the English sent all the remaining Native people in Natick to an island in Boston Harbor. Deprived of sufficient food, shelter, fuel, and clothing, many died there.

In 1781, the year Natick was formally incorporated, there were few vestiges left of the "Praying Indian" town that had thrived there a century earlier.

The war lasted for almost two years. When it ended, some Indians returned to Natick, but the town struggled to survive. The death of John Eliot in 1690 only made matters worse. The English confined the Natick Indians repeatedly over the next 30 years. By 1716 only 170 Indians remained in Natick, the Indian church had dissolved, and there was no schoolmaster. In 1719, the Indians divided the land they had held in common among 20 families.

White settlers began to move into the town, and the Indians sold off most of their land. Selectmen replaced the Indian governing council, and a new church with a white minister was established. In 1781, the year Natick was formally incorporated, there were few vestiges left of the "Praying Indian" town that had thrived there a century earlier.

Although few traces remained of the Praying Indians of Natick, 21 Native men served in the local militia during the War for Independence. On Memorial Day 2006, the town recognized their sacrifice as three Native Americans in tribal regalia prayed and sang. Two stone monuments bear the words "We Will Remember" and the names of the fallen soldiers buried in unmarked graves over 225 years ago.

Trustees of Reservations' Pegan Hill is on the southern edge of the "Praying Town" of Natick.

"When Deer Island Was Turned Into Devil's Island," by Jill Lepore in Bostonia Magazine, (Summer 1998).

On this day in 1800, Thomas Thorakwaneken Williams arrived in Longmeadow with his two young sons, Eleazer and John. Thomas was the grandson of Eunice Williams, captured as a child during the 1704 raid on...

On this day in 1675, Wampanoag warriors killed seven colonists in Swansea in retaliation for a series of injustices suffered at the hands of the English. This raid is generally considered the beginning of King...