On this day in 1734, the Yale-trained missionary John Sergeant opened a school for Mohican Indian children in Great Barrington. About 50 members of the Housatonic tribe of the Mohicans joined four English families on a tract of Berkshire County land set aside by the General Court in Boston. John Sergeant envisioned this Indian town as a community where English and Christianized Indians would live side-by-side in peace. As Sergeant hoped, the native residents followed the example of their English neighbors — farming, lumbering, sending their children to school, worshipping in church. By the time Sergeant died in 1749, more than half of the 218 Indians living in what had become the town of Stockbridge had been baptized into the Protestant faith.

The Stockbridge Indians were allies of the British in the French and Indian wars and of the colonists in the fight against British rule. 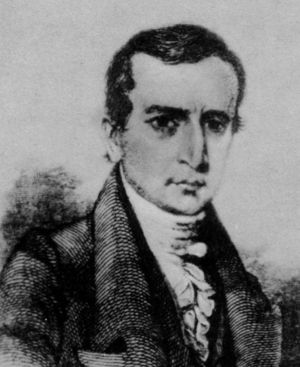 Repeated migrations and removals have marked the history of the Mohican people. By the early 1600s, they were living on both sides of the Hudson River in what is now New York state. The tribe's first contact with Europeans came when Henry Hudson and other Dutch traders arrived in 1609, beginning a lucrative trade in beaver and otter furs. By the early eighteenth century, continuing conflict over control of the fur trade with the Mohawk, who lived west of the Hudson, caused the Mohicans to move to the east side of the river and into western Massachusetts.

The change brought an impending crisis to a head. For more than a century the Mohicans had traded with the Dutch and later with the English along the Hudson. Participation in the fur trade, consumption of European goods, and the devastating spread of smallpox and other European diseases to which native people had no immunity transformed Mohican culture. Some Mohican leaders concluded that the prosperity, health, and military success the Europeans seemed to enjoy was due to their religious practices. Conversion to Christianity and a western education seemed the best way to improve the material and spiritual lot of the next generation.

Some Mohican leaders concluded that the prosperity, health, and military success the Europeans seemed to enjoy was due to their religious practices.

The 1628 charter of the Massachusetts Bay Colony called on the colonists to convert Native Americans to Christianity. In 1730 the royal governor decided that little had been done to live up to the mission. Jonathan Belcher asked the General Court to establish a town where a minister, schoolmaster, and tradesmen would teach "civilized Christian living" and provide basic education and apprenticeships to Indian children.

In spring of 1734, word reached Springfield that members of the Housatonic tribe of the Mohicans were receptive to the idea. The ministers there already had a young man in mind for the job of missionary. John Sergeant was a short, dark-haired, 24-year-old tutor at Yale College. Born in Newark, New Jersey, Sergeant had entered Yale at age 15; by the time he finished his studies four years later, he felt himself called to the ministry — in particular, missionary work with Native people. He was ordained in 1735.

John Sergeant proposed recruiting a number of English families to promote the Native people's adoption of European culture. Governor Belcher agreed, "for to civilize will be the readiest way to Christianize them." Between 1736 and 1739, four white families joined 100 Mohicans to establish the town of Stockbridge. By 1749 the number of white families had grown to ten. The village had a single main street with 53 Indian dwellings, 20 of which were English-style homes.

. . . "for to civilize will be the readiest way to Christianize them."

That year, John Sergeant died at age 39. In 1751 the Reverend Jonathan Edwards succeeded him as missionary to the Indians and pastor in Stockbridge. The controversial minister who had been dismissed from his Northampton church remained until 1758 when he resigned to become president of Princeton University. During Edwards's tenure, the English townspeople increasingly circumvented the provision of the town's charter that guaranteed Indians their land forever. Over the next two decades, mismanagement and disputes over land ownership led to the decline of the mission.

The Stockbridge Indians were allies of the British in the French and Indian wars and of the colonists in the fight against British rule. By the end of the Revolution, as relations with their white neighbors continued to deteriorate, the Mohicans accepted an invitation to live among the Oneida Indians in upstate New York. This brought to an end the mission started by John Sergeant. Later the Stockbridge Mohicans relocated again, this time to Indiana. In 1850 they moved one more time to Wisconsin, where many of their descendants remain today.

The Trustees of Reservations owns the Mission House, which John Sergeant built for his bride on Main Street in Stockbridge;the National Historic Landmark is open for tours seasonally.

The Mohicans of Stockbridge, by Patrick Frazier (University of Nebraska Press, 1994).

On this day in 1800, Thomas Thorakwaneken Williams arrived in Longmeadow with his two young sons, Eleazer and John. Thomas was the grandson of Eunice Williams, captured as a child during the 1704 raid on...

On this day in 1727, Jonathan Edwards was ordained in Northampton. Two years later, he succeeded his grandfather as minister of what was then the largest and most influential church outside of Boston. He was...

On this day in 1781, Natick was formally incorporated, but the town already had a long history. In 1651, a group of Christianized Indians had founded a "Praying Town" in what is now South Natick....