Millerites Await End of the World

Many deceivers have crept under the sacred mantle of religion, and Mr. William Miller is one of them. Whether he has been first himself deceived, or whether he is wittingly practising a pious fraud, is known to the Searcher of hearts. I have but to point out sundry errors and weak places in his book; sufficient, however to destroy his credibility, but not to prove that the end of the word is distant; for "of that day knoweth no man" and we are told that it is even hidden from the angels. . . .

If a man were to prophesy that, on a certain day during the next year, Washington city would be destroyed by an earthquake, who could positively declare the contrary? I pretend not to know that the world will survive the year 1843; but I think that Mr. William Miller knows as little about it as I do. . . .

The Almighty has wisely hidden [the day of judgment] from us. Let the man who would rashly essay to raise the veil, ponder well upon the responsibility he assumes. Let him not imagine that he does God service by terrifying the weak, and, in this way, driving them into the church. Such was not the policy of the apostle, who cautioned the flock not to be terrified by word or by epistle, as if the great day of the Lord was at hand. Let those clergymen who willfully encourage Miller's imposture bear in mind that the cause of truth can never be aided by deception; and that, if they should now gain a few converts through his instrumentality,  their loss will eventually be greater than their gain. That portion of their wall which is built with his untempered mortar will, when it falls, carry with it some of the more sound mason-work, and "great will be the fall thereof."Those who are driven into the church by groundless fears will prove sad converts when those fears are removed by the disgraceful exposure of their prophet. . . . Suppose that Christ had not risen from the dead; then would the apostle's faith have been in vain; and how can it be expected that those who have embraced religion on the credit of Mr. Miller's prediction will remain firm in the faith after the imposture is exposed?

From "General Remarks," prologue to Miller Overthrown: or the False Prophet Confounded, by "a Cosmopolite" (Boston, 1840).

See --YouTube/Beyond the Fringe--"The End Of The World" Sketch. Can the Rapture be far behind? "Will this wind, be so mighty, as to lay low, the mountains of the Earth?"
Login

On this day in 1844, tens of thousands of people in Massachusetts expected the world to come to an end. They were followers of William Miller, a man who claimed to know the date of Jesus's second coming. Many "Millerites" sold all their possessions to prepare for the day when Christ would return to earth, gather them up to heaven, and purify the rest of the world in an all-consuming fire. As the date approached, a great comet blazed across the Massachusetts sky, and the number of believers grew. On October 22nd, the Millerites donned white robes and climbed mountains or trees to speed their ascension into heaven. When the prophecy failed, most abandoned Miller's apocalyptical teachings and returned to their original churches.

Wanting to be suitably attired for heaven, Millerites made long white garments for themselves that they called their "ascension robes." 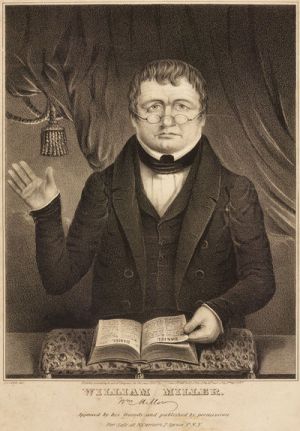 William Miller was a devout Baptist and careful student of the Bible. In 1818 he calculated a date for the end of the world by using a strictly literal reading of the first chapters of Genesis and other prophetic events in the Bible. He aligned these events with the prophetic numbering systems in the Books of Daniel, Ezekiel, and Revelations. He became convinced that he could use this system to determine the exact period of time between the birth of Jesus, the fall of Jerusalem, and the return of the Messiah. Jesus, Miller predicted, would make his millennial return and the world would end on October 22, 1844. After publishing a book about his theory in 1831, he set off on a speaking tour of the Northeast.

Despite many scoffers and doubters, he steadily gained followers. By 1840 Miller had gathered a sizable following. Most of these "Millerites"— between 50,000 and 100,000 in 1844 — lived in central and eastern Massachusetts. Their religious meetings had all the emotional passion of tent revivals.

In the town of Harvard, one man sold his cows at great sacrifice because there would be no one to care for them when he was "gone up.

As the year of the expected apocalypse neared, believers in the prophecy began to give away their belongings, abandon their crops, and sell their land. In the town of Harvard, one man sold his cows at great sacrifice because there would be no one to care for them when he was "gone up." Women in the Worcester area cut off their hair, removed the ruffles from their dresses, threw or gave away their jewelry, and, in some cases, everything they owned. Others broke up all their furniture declaring that they would no longer have use for tables or chairs or beds. Wanting to be suitably attired for heaven, Millerites made long white garments for themselves that they called their "ascension robes."

In the spring of 1844, a prophetic sign appeared: Miller's prediction that the end of the world was near gained new weight, and new adherents, when a great comet was seen moving across the Massachusetts sky at noontime.

Emerson said: 'The end of the world does not affect me; I can get along without it.'"

On October 22nd, believers donned their robes. A large gathering lived in or around Groton. Believing that Christ would return on a mountaintop, they climbed up Mt. Wachusett to await the coming of the Lord. One respectable but arthritic old man from Harvard who could not make it up the mountain stationed himself at the very top of the tallest apple tree in his orchard and waited out the night. In New Bedford, a whole family perched on the branches of an apple tree dressed in their white robes. According to one story, a man accosted Ralph Waldo Emerson and the Reverend Theodore Parker on a Concord road and excitedly asked if they realized that the world was going to end that day. "Mr. Parker said: 'It does not concern me, for I live in Boston.' And Mr. Emerson said: 'The end of the world does not affect me; I can get along without it.'"

The vast majority of Millerites were devastated, and some impoverished, by the failure of the prophecy. A remnant continued to believe. They reinterpreted the meaning of the prophecy and came to see October 22, 1844, as the day of Christ's cleansing of his heavenly, rather than earthly, sanctuary. Today's Seventh-day Adventists carry on Miller's teachings.

On this day in 1906, the recently enlarged Mother Church of Christian Science was dedicated in Boston. The original building seated only 1,000 people, and the church's growing popularity created the need for more space....

On this day in 1841, a group of Boston-area utopians purchased Brook Farm in West Roxbury. The writer Nathaniel Hawthorne spent six months there and later wrote about his experiences in his satirical novel Blithedale...