During my father's life, a few years before my birth, his thoughts had been turned towards the new manufacturing town growing up on the banks of the Merrimack. He had once taken a journey there, with the possibility in his mind of making the place his home, his limited income furnishing no adequate promise of a maintenance for his large family of daughters. From the beginning, Lowell had a reputation for good order, morality, piety, and all that was dear to the old fashioned New Englander's heart.

After his death, my mother's thoughts naturally followed the direction his had taken; and seeing no other opening for herself, she sold her small estate, and moved to Lowell, with the intention of taking a corporation-house for mill-girl boarders. Some of the family objected, for the Old World traditions about factory life were anything but attractive; and they were current in New England until the experiment at Lowell had shown that independent and intelligent workers invariably give their own character to their occupation. My mother had visited Lowell, and she was willing and glad, knowing all about the place, to make it our home.

From A New England Girlhood, Outlined from Memory, by Lucy Larcom (reprinted by Corner House Publishers, 1977).

Lucy Larcom and "The Lowell Offering"

We have just added a new section to the University of Massachusetts Lowell, Center for Lowell History website. It features an index to "The Lowell Offering" with links to many of its published articles, people, and images. See: http://library.uml.edu/clh/
Typo

"thousands of famers' daughters" - (farmers)
Lucy Larcom and her work

I have enjoyed reading the Lowell Offering excerpts in a paper back book which I'd bought in Lowell many years ago; the stories are fascinating. The Moment on Ms Larcom was very interesting and helpful, however, I don't know why the author kept suggesting that Lucy and her poems are "forgotten"; perhaps I'm not informed about who does the forgetting vs. the remembering in our society. If her work is forgotten, that is a great loss to us. However, I like to read older works and have been familiar with her for years. The lifestyle of the young women was very disciplined, and I think that was a very good thing basically. ------------------------- Karin Zachary
Lucy Larcom and her work

Lucy is not as well known as other area writers and poets of that time such as John Greenleaf Whittier, Edgar Allen Poe, Nathaniel Hawthorne, Henry Wadworth Longfellow, James Russell Lowell, etc. Back in the late 80s when I read "A New England Girlhood," I called Lowell City Hall and asked if they would ever put up a sign on Lucy Larcom Park to identify it as such because at that time, there was none. It was just sort of known by locals that that was the name, but most people didn't know who she was. The woman I spoke to at City Hall asked me who she was when I inquired. Anyway, there is a sign today, but I'm sure there are still many people who don't know who she is. She does not share the same recognition today as the other writers mentioned do, and it's really a shame. I loved A New England Girlhood.
Login

On this day in 1893, Lucy Larcom died. A popular poet during her lifetime, she would be forgotten today except for a work of prose that she wrote in 1889. Her autobiography, A New England Girlhood, tells the story of her early childhood in the coastal village of Beverly and her move to Lowell, the mill town on the Merrimack River, where she lived and worked for more than a decade. She was a regular contributor to the Lowell Offering. The magazine was published by a group of "mill girls," as the young women who made up the great majority of workers in Massachusetts textile factories were called. Larcom's reputation as a poet soon faded, but A New England Girlhood remains an American classic.

Some of their wages went to help parents with mortgage payments or brothers with school fees, but most "mill girls" worked to accomplish personal goals . . . 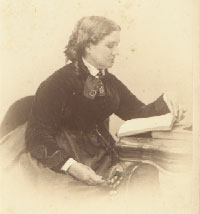 By the time she died in 1893, Lucy Larcom had written countless poems, magazine articles, and children's stories. Popular at the time, her work soon faded from memory. Only A New England Girlhood, her autobiography published in 1889, is read today. In the introduction, Larcom explained, "I can see very distinctly the child that I was, and I know how the world looked to her, far off as she is now. . . I have enjoyed bringing her back, and letting her tell her story."

In A New England Girlhood, Lucy Larcom tells not only her own story but the story of an industrial experiment that, in the space of a few decades, completely transformed the economic and physical landscape of southern New England. Although in some ways she was an atypical "mill girl" — for example, she came to the factory town of Lowell as a child with her family rather than as a single young woman — in other ways, her experiences were representative of the Yankee women who made up the original workforce in the Lowell mills.

"From the beginning," she wrote in her autobiography, "Lowell had a high reputation for good order, morality, piety, and all that was dear to the old-fashioned New Englander's heart." A lot of that reputation rested on the shoulders of the farmers' daughters who kept the bobbins full and the shuttles flying.

"I can see very distinctly the child that I was, and I know how the world looked to her, far off as she is now. . . 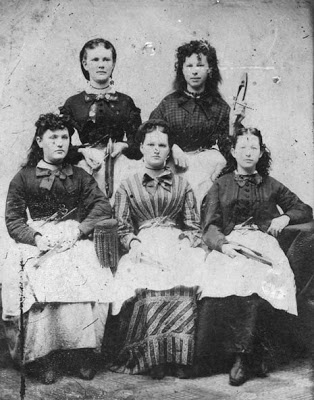 The owners of the new factories needed a workforce that could follow complex instructions but accept relatively low wages — certainly lower than men could be paid. They turned to New England's young women. Drawn by the highest wages paid to women anywhere in America — from $1.85 to $3.00 a week — thousands of famers' daughters decided to try mill work. By 1840, about 65 percent — in textile centers like Lowell, as many as 90 percent — of New England's factory operatives were female. Most of these women took their first factory job in their late teens and stayed an average of four years.

Some of their wages went to help parents with mortgage payments or brothers with school fees, but most "mill girls" worked to accomplish personal goals — to buy new clothes or save for a term at school — rather than to meet family obligations. Lowell mill hands were the first women to have bank accounts in their own names.

While the women had control over the money they earned, they lived in a highly regulated environment. They were required to live in boardinghouses owned by the corporations and presided over by respectable women, usually widows. The "mill girls" were expected to abide by strict rules designed to protect their virtue, and with it, the reputation of the Lowell factories. A ten o'clock curfew was in effect and church attendance was mandatory.

It was as the daughter of a boardinghouse keeper that Lucy Larcom came to Lowell. Born in the coastal town of Beverly in 1826, she was the second youngest of eight children. Her father was a retired sea captain who died when she was young. To support the family, in 1835 Mrs. Larcom took a job as a supervisor at a Lowell boardinghouse and moved there with her children.

". . . it really was not hard, just to change the bobbins of the spinning frames every three-quarters of an hour or so, with half a dozen other little girls who were doing the same thing." 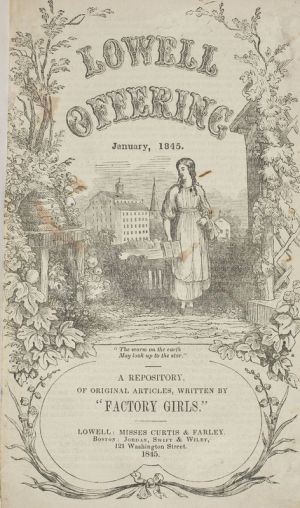 Lucy's older sisters went to work in the mill. At first Lucy attended school, but with the family struggling to get by, at the age 11, she, too, began working as a "doffer," replacing empty bobbins on the loom. She later recalled going to her first day at the mill "with a light heart." "I thought it would be a pleasure to feel that I was not a trouble or burden or expense to anybody… The novelty of it made it seem easy, and it really was not hard, just to change the bobbins of the spinning frames every three-quarters of an hour or so, with half a dozen other little girls who were doing the same thing."

Changing bobbins was work for little girls. When Lucy got older, the work changed and "sometimes the confinement of the mill became very wearisome." It was against company regulations to bring books into the mill, but like many of her co-workers, Lucy cut poetry and hymns out of newspapers and pasted them to the walls and windows near her loom.

Although the days were long — women commonly worked 60 to 75 hours a week — the "mill girls" were delighted to discover that, unlike farm work, factory work left them at least a little free time to spend as they pleased. Most had been educated in district schools at home, and many wished to continue their education. Lucy Larcom, for example, took classes in German and botany. By patronizing evening classes, Sunday schools, libraries, and lecture halls, the "mill girls" were ensuring that their years in the factory would enhance, not detract from, their desirability as wives and mothers.

The fact that it was published by factory workers drew national and international attention, and the editors were eager to show that industrial labor need not be degrading to women. 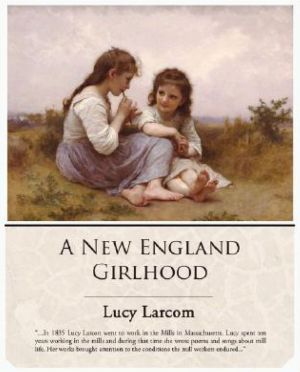 In 1840, with financial backing from the mill owners, a group of female factory operatives, including Lucy and her sister, founded the Lowell Offering, a magazine which carried poems, letters, and fiction. The fact that it was published by factory workers drew national and international attention, and the editors were eager to show that industrial labor need not be degrading to women. However, they were also aware of the toll mill work took on women's health — after all, they were mill workers themselves — and their effort to balance the positive and the critical was probably doomed to fail.

The Offering did fail in 1845, but during its short life Lucy Larcom was its best-known contributor, publishing poems in almost every issue.

In 1846, she left Lowell to follow a married sister to Illinois. There she taught school for three years before finally realizing her dream of completing her own education. In 1849, she enrolled in a women's seminary, the mid-nineteenth-century equivalent of a women's college. In 1852, she returned to Massachusetts — but not to mill work. By the 1850s, conditions in the mills had made them unattractive to the Yankee women who had worked there 20 years before. Lowell's workforce was now made up predominantly of Irish immigrants.

Lucy Larcom supported herself as a teacher at the Wheaton Female Seminary, now Wheaton College, until poor health forced her to retire. She spent the last 30 years of her life pursuing a literary career. She published eight books of poetry and edited a popular children's magazine. Four years before her death at the age of 69, she wrote A New England Girlhood. By documenting her early years, she created a work that has lasted long after her poetry has been forgotten.

This Mass Moment occurred in the Northeast and Southeast regions of Massachusetts.

Women at Work: The Transformation of Work and Community in Lowell, Massachusetts, 1826-1860, by Thomas Dublin (Columbia University Press, 1979).