Several years have elapsed since the historical tracts, now with diffidence submitted to the public, have been arranged in their present order. Local circumstances, the decline of health, temporary deprivations of sight, the death of the most amiable of children, "the shaft flew thrice, and thrice my peace was slain," have sometimes prompted to throw the pen in despair. I draw a veil over the woe-fraught scenes that have pierced my own heart. "While the soul was melting inwardly, it has endeavored to support outwardly, with decency and dignity, those accidents which admit of new redress, and to exert that spirit that enables to get the better of those that do."

Not indifferent to the opinion of the world, nor servilely courting its smiles, no further apology is offered for the attempt, though many may be necessary, for the incomplete execution of a design, that had rectitude for its basis, and a beneficent regard for the civil and religious rights of mankind, for its motive.

The liberal-minded will peruse with candor, rather than criticize with severity; nor will they think it necessary that any apology should be offered for sometimes introducing characters nearly connected with the author of the following annals; as they were early and zealously attached to the public cause, uniform in their principles, and constantly active in the great scenes that produced the revolution, and obtained independence for their country, truth precludes that reserve which might have been proper on less important occasions, and forbids to pass over in silence the names of such as expired before the conflict was finished, or have since retired from public scenes. The historian has never laid aside the tenderness of the sex or the friend; at the same time, she has endeavored, on all occasions, that the strictest veracity should govern her heart, and the most exact impartiality be the guide of her pen....

Before this address to my countrymen is closed, I beg leave to observe, that as a new century has dawned upon us, the mind is naturally led to contemplate the great events that have run parallel with and have just closed the last. From the revolutionary spirit of the times, the vast improvements in science, arts, and agriculture, the boldness of genius that marks the age, the investigation of new theories, and the change in the political, civil, and religious characters of men, succeeding generations have reason to expect still more astonishing exhibitions in the next. In the mean time, Providence has clearly pointed out the duties of the present generation, particularly the paths which Americans ought to tread. The United States form a young republic, a confederacy which ought ever to be cemented by a union of interests and affection, under the influence of those principles which obtained their independence. These have indeed, at certain periods, appeared to be in the wane; but let them never be eradicated, by the jarring interests of parties, jealousies of the sister states, or the ambition of individuals! It has been observed, by a writer of celebrity [Paley's Moral Philosophy], "that people, government, and constitution is the freest, which makes the best provision for the enacting of expedient and salutary laws." May this truth be evinced to all ages, by the wise and salutary laws that shall be enacted in the federal legislature of America!

May the hands of the executive of their own choice, be strengthened more by the unanimity and affection of the people, than by the dread of penal infliction, or any restraints that might repress free inquiry, relative to the principles of their own government, and the conduct of its administrators! The world is now viewing America, as experimenting a new system of government, a FEDERAL REPUBLIC, including a territory to which the Kingdoms of Great Britain and Ireland bear little proportion. The practicability of supporting such a system has been doubted by some; if she succeeds, it will refute the assertion that none but small states are adapted to republican government; if she does not, and the union should be dissolved, some ambitious son of Columbia, or some foreign adventurer, allured by the prize, may wade to empire through seas of blood, or the friends of monarchy may see a number of petty despots, stretching their scepters over the disjointed parts of the continent. Thus by the mandate of a single sovereign, the degraded subjects of one state, under the bannerets of royalty may be dragged to sheathe their swords in the bosoms of the inhabitants of another.

The state of the public mind appears at present to be prepared to weigh these reflections with solemnity and to receive with pleasure an effort to trace the origin of the American Revolution, to review the characters that effected it, and to justify the principles of the defection and final separation from the parent state. With an expanded heart, beating with high hopes of the continued freedom and prosperity of America, the writer indulges a modest expectation that the following pages will be perused with kindness and candor: this she claims both in consideration of her sex, the uprightness of her intentions, and the fervency of her wishes for the happiness of all the human race.

Prologue to History of the Rise, Progress and Termination of the American Revolution, interspersed with biographical, political and moral observations, in three volumes by Mrs. Mercy Warren of Plymouth, Massachusetts.

How did Abigail respond

to John Adams' pronouncement about the proper role of the ladies? I suppose that that was just John being John. What did Mercy think of Jefferson?
Mercy Otis Warren

On this day in 1754, Mercy Otis of Barnstable and James Warren of Plymouth began their remarkable 54-year partnership. When she married into a family active in public affairs, Mercy embraced the chance to be involved in the events of the Revolutionary era. She was a keen and intelligent observer and an accomplished writer. In the 1770s, she had several satirical plays published anonymously before embarking on a history of the Revolution. Her History of the Rise, Progress and Termination of the American Revolution appeared in 1805. The fact that the book discounted the diplomatic achievements of her old friend John Adams caused a bitter rift. "History is not the Province of the Ladies," Adams angrily declared.

Whether it was an oversight or intentional, she ignored John Adams's remarkable diplomatic achievements in France and the Netherlands and wrote critically of his supposed "partiality in favor of monarchic government." 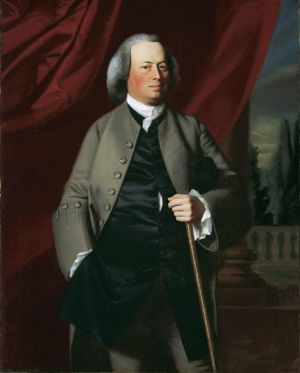 Born in 1728, Mercy was the eldest daughter in James and Mary Otis's family of 13 children. The Otises were among the leading families of Cape Cod. A prosperous farmer, merchant, and lawyer, James Otis served as a judge of the Barnstable County court of common pleas. While he saw that his sons were all prepared for college, he gave his daughters no formal schooling. Mercy did, however, sit in on some of her brothers' private lessons.

At 26, she married James Warren and moved to Plymouth. In more than 50 years of marriage, the couple would raise five sons. The Warren and Otis families' increasing involvement in the conflict between the American colonies and the British parliament began with the Stamp Act crisis in 1765. That same year, James Warren was elected to the Massachusetts House of Representatives and served there until 1777.

The play portrayed royal governor Thomas Hutchinson (as the character Rapatio) bent on destroying liberty in a fictional country of "free-born sons." 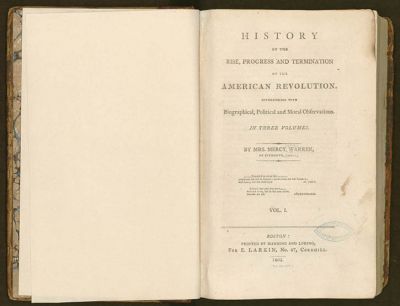 Although as a woman, Mercy Warren could play only a very limited public role, she was an active participant in and observer at these strategy sessions. She had been writing poetry since 1759, and now she began creating satirical plays written in verse. In 1772 The Adulateur appeared anonymously (as much of her work did) in the Massachusetts Spy, a Boston newspaper. It was written to be read, not performed, since plays were banned in Massachusetts. The play portrayed royal governor Thomas Hutchinson (as the character Rapatio) bent on destroying liberty in a fictional country of "free-born sons." The Defeat was published in 1773, starring Rapatio once again, and two years later, The Group featured the colony's evil Tories.

Towards the end of the Revolution and in the years that followed, James Warren's political career suffered. He turned down a number of positions, including an appointment to the Massachusetts Supreme Court. Biographers suggest that Mercy may have encouraged her husband to stay close to home. The Warrens also parted company with the pro-Federalist majority that dominated the new state's politics. They worried about the ability of the Republic to survive and opposed adoption of the federal Constitution, fearing it would lead to "uncontrolled despotism."

"I hope you will continue, for there are few Persons possessed of more Facts, or who can record them in a more agreeable manner," John Adams wrote her from London in 1787.

In the late 1770s, Mercy Warren had begun working on a history of the Revolution, a Herculean effort supported by her husband, sons, and their long-time friends Abigail and John Adams. "I hope you will continue, for there are few Persons possessed of more Facts, or who can record them in a more agreeable manner," John Adams wrote her from London in 1787. He would come to regret his encouragement.

In 1805 Mercy Warren's three-volume History of the Rise, Progress and Termination of the American Revolution was published. Warren avoided describing "military havoc," focusing instead on the key figures involved in the transformational historic events. Whether it was an oversight or intentional, she ignored John Adams's remarkable diplomatic achievements in France and the Netherlands and wrote critically of his supposed "partiality in favor of monarchic government." This effectively ended a friendship between the families that was already shaky, given the dramatically different paths that John Adams and James Warren had taken in their careers and political views.

Mercy Warren continued her active correspondence with friends and remained as mentally alert and vigorous as ever to the end of her long life. She died at age 86 in Plymouth, where she had lived most of her life.

"Bonds of Friendship: The Correspondence of Abigail Adams and Mercy Otis Warren," by Edith B. Gelles, in Proceedings of the Massachusetts Historical Society, Vol. CVIII, 1996.