My memory is short, and braine is dry.

And back, once straight, begins apace to bow.

My grinders now are few, my sight doth faile.

My skin is wrinkled, and my cheeks are pale.

North Andover was her home

In the first paragraph, there are mistakes . . . the dedication was held on Saturday, September 16, 2000, the exact date of her death. The week of events at Harvard University and in the towns of Salem, Ipswich and North Andover was to commemorate the 350th anniversary of the publishing of "The Tenth Muse." North Andover, then known as "Andover Parish" was founded about 1642. She helped found the town and resided there for the last half of her life. The Old Burying Ground (c. 1660) is at the corner of Academy Road and Osgood Street. It is believed her home (see "Upon the Burning of Our House, July 10, 1666" for her words about the loss) was situated across the road from the Parson Barnard House (c. 1715). Thank you for all you do for history and culture in the Commonwealth and beyond! ------------------------- Poet Alive
Login

On this day in 2000, several North Shore communities were celebrating "Anne Bradstreet Week" to mark the 350th anniversary of the publication of her work. A reenactment commemorated her arrival in Salem in 1630. Events were held in Ipswich and North Andover — towns she and her husband helped found. When a collection of Bradstreet's poems, The Tenth Muse Lately Sprung Up in America, was published in London in 1650, it established her as the first Anglo-American — male or female — whose poetry appeared in print. Over a quarter of a century passed before there was an American edition of her writing. Published in 1678, six years after her death, the book included revisions of her early work and many new poems about her home and family.

Her poem "A Dialogue between Old England and New" (1642) is the first to declare New England's superiority, describing Old England as a "wailing," "trodden down" woman whose vigorous, virtuous daughter must nurse her back to health. 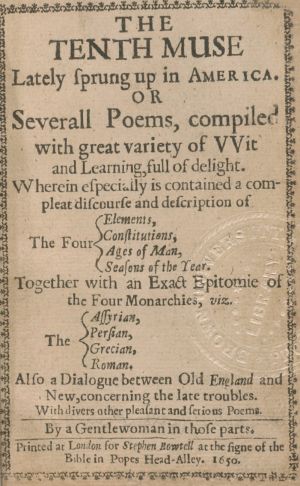 This essay was written by Bradstreet biographer Charlotte Gordon. It first appeared in Harvard Magazine, May/June, 2005.

Anne Bradstreet's poem "To My Dear and Loving Husband," a favorite at weddings, is one of the most anthologized examples of early American verse. But few realize its author was also an extraordinarily courageous woman whose spirit and faith helped shape the America we know today.

Bradstreet was only 18 when she arrived in Salem harbor in 1630 on the Arbella. She had been reluctant to say goodbye to her elegant home in England, but her husband, Simon, and stern father, Thomas Dudley, were determined to leave a country whose government was increasingly hostile to critics of the Anglican Church. Later in life, when she wrote that her "heart rose" as she set foot in America, she meant not that she rejoiced, but that she retched.

Not surprisingly, she was horrified by the harshness of the New World: the "hungry wolves," "stormy rains," and "rugged stones" that she would one day describe in her poetry. Few Englishmen, and even fewer Englishwomen, had ventured to America. When the Arbella's party disembarked, they discovered that the little band of settlers sent to Salem the year before to prepare for the rest of the colonists had been almost obliterated by disease and starvation. The leaders of Bradstreet's group, including her father, husband, and the colony's future governor, John Winthrop, took one look at the miserable little settlement and headed south.

. . . she was horrified by the harshness of the New World: the "hungry wolves," "stormy rains," and "rugged stones" that she would one day describe in her poetry.

While Winthrop crossed the Mystic River, settling on the hilly peninsula the Puritans called Boston (after the Lincolnshire town they had left behind), Dudley led his family and a few others to a "spacious plain" near the Charles River where they founded a tiny village originally known as New Towne. The Bradstreets built their first of many new homes across from the cow pasture. Six years later, the site became "the yard" for the colony's first college.

That initial winter in America would later be called "the starving time." Two hundred of the thousand or so emigrants died, and another 200 streamed back to England. Bradstreet, only recently recovered from a severe bout of scarlet fever, survived along with the rest of her family. But instead of rejoicing, she wept because she could not conceive. That she was malnourished and exhausted did not matter: to Bradstreet, her barrenness was a sign that God did not deem her worthy. And what if her beloved husband rejected her as an unfit wife because she could not have children?

In fact, Simon remained devoted to Anne throughout their life together, but still she prayed and grieved, fruitlessly. The next winter, she fell gravely ill. While convalescing, she wrote her first poem, "Upon a Fit of Sickness," declaring both her faith in God and her belief that through poetry she could draw closer to the divine. Immediately, she conceived. According to Puritan logic, her pious words had won God's blessing. Bradstreet was elated when she bore a healthy son; she would bear seven more children in the next 18 years.

While convalescing, she wrote her first poem, "Upon a Fit of Sickness," declaring both her faith in God and her belief that through poetry she could draw closer to the divine. Immediately, she conceived.

Her impatient father, meanwhile, pressed to expand the colony. During her second pregnancy, her family hiked through pine forests to build new homes in a tiny outpost named Ipswich. Twelve years later, she and Simon and their children helped found Andover, a settlement even more remote. Rather than complain, Bradstreet seems to have been inspired by the challenges of the wilderness. She began to write poetry that explored important subjects of the day as well as private matters, such as her sadness when her husband was away on colony business.

Yet his frequent travel gave her the opportunity to grow in confidence as she was forced to shoulder many of his responsibilities and raise their children single-handedly. Miraculously, she still found time to write. Her poetry became more muscular over time, reflecting an encyclopedic knowledge surpassing that of most men of her generation and touching on science, history, politics, and religion—even though experts believed scholarship could endanger women's physical and spiritual well-being. John Winthrop famously wrote, "[A] godly young woman…was fallen into a sad infirmity, the loss of her understanding, and reason…by occasion of her giving herself wholly to reading and writing."

Bradstreet did not hide her identity, although she realized, "I am obnoxious to each carping tongue/Who says my hand a needle better fits."

Bradstreet did not hide her identity, although she realized, "I am obnoxious to each carping tongue/Who says my hand a needle better fits." Rather, she created strong female characters who debated serious issues. Her poem "A Dialogue between Old England and New" (1642) is the first to declare New England's superiority, describing Old England as a "wailing," "trodden down" woman whose vigorous, virtuous daughter must nurse her back to health. By the late 1640s she had composed enough poems to fill a volume. Although it was her brother-in-law who actually submitted her manuscript to a publisher, it seems unlikely that Bradstreet was entirely unaware of his plan.

In 1650 The Tenth Muse Lately Sprung Up in America appeared in the bookstalls of London. It was an astonishing success. Bradstreet became renowned for her writing and her piety, viewed as an icon of feminine virtue: an image fostered by her language of self-deprecation. Instead of seeking the "bays" of male literary fame, she asked only for a simple wreath of the humble kitchen herb "thyme." It was eternal, not temporary, fame to which she aspired. More than 350 years later, when most of her male contemporaries have been forgotten, she appears to have triumphed.

The Search for Anne Bradstreet in Essex County, MA

On this day in 1761, John Wheatley, a successful merchant, purchased a frail African girl off a slave ship in Boston. The Wheatleys named her Phillis, after the vessel that had brought her across the Atlantic...

On this day in 1746, Lucy Terry Prince was among the residents of Deerfield present during an Abenaki raid on the village. Lucy, an enslaved woman, described the horrific event in "The Bars Fight," the earliest...