I am the same Jim Curley today that I have been for forty years. . . . Where I found a muddy lane, I left a broad highway; where I found a vacant lot, I left a magnificent temple of learning; where I found a weed-grown field, I left a playground: throughout life, wherever I have found a thistle, I endeavored to replace it with a rose. No, this leopard has no desire to change his spots. If to keep faith with the people and lead the fight for liberal legislation, to give jobs to the jobless, food to the hungry, and to rescue children and mothers from malnutrition and exploitation and bring comfort and security to the aged constitutes leopard spots, then I submit that I am covered with them.

Some persoanl notes on Gov./Mayor Curley.

As a human being Mr. Curley suffered great tragedy in the course of hs life. Seven of his nine children died prior to himself. In fact two died on the same day. Additionally, his first wife died before he did. To endure such suffering and rise to the heights he did was the mark of a special person.
Curley, Al Smith, and FDR.

In 1928 Curley was a strong supporter of Al Smith for president. Smith lost the election to Herbert Hoover, many suspected it was because of his Catholic faith. In 1932 Smith wanted another run for Prsident, FDR was also interested in the Presidentcy. Curley reasoned that Smith couldn't win and joined forces with FDR supporting him through the convention and election. In his autobiography Curley claims he spent $25,000 of his own money to help FDR get elected. Additionally, Curley made a speech entitled the "Forgotten Man." The speech was so moving that recordings were made and played on the radio as political advertisements for FDR. It is true the Boston Irish were upset with Curley's endorsement of FDR over fellow Catholic Smith, but once FDR won the resentment evaporated.
Curley, Al Smith, and FDR.

You seem to know quite a bit about James Curley. I am writing a piece about him and would love to pick your brain...are you willing?
Curley, Al Smith, and FDR.

It would be difficult to communicate via Mass Moments. I suggest you consult the following publications: Curley's autobiography, "I'd Do It Again: Joe Dineen's "The Purple Sharmrock; and Jack Beatty's The Rascal King. Additionally, former MA State Senate President William Bulger has written a book on Curley entitled: James Michael Curley, a short biography.
Mayor Curley & the 1929 election.

The female member of the school committee was Mrs. Jennie Loitman Barron, a most respected member of the Boston community. In a radio address Curley accused Barron of wanting payment to endorse him. Additionally, he implied she had inappropriately profited from the sale of a former brewery to the city. Ironicly, Mrs. Barron and her husband were in the radio studio at the time of Curley's remarks (she had actually spoken prior to Curley and upset him by taking some shots at him) and were thus able to hear the charges first hand. After his speech Culey charged from the broadcast booth into the anteroom to confort Barron, who by now was in tears, her husband was likewise upset over the incident and gave Curley a dirty look. The Barrons then left the station (WNAC), avoiding a personal and physical confrontation with Curley. Curley's main opponets in the race were Frederick Manfield and Daniel Coakley. Both opponets went after Curley for attacking a woman and a mother. Per Jack Beatty's, "The Rascal King," Curley was considered a 5 to 1 favorite. The final count was: out of 216,000 votes cast, Curley 117,000, Mansfield 96,000, and Coakley less than 3,000. If a 5 to 1 favorite, the Barron attack was a miscalculation on Curley's part. In the overall scheme of things it only proves once againg that Boston politics is a spectator sport.
Family connections

My widowed Irish gr-grandmother ran a construction company in the early 1900's in Boston and socialized with the Purple Shamrock. She was always known to "put the bribe in his hand myself, so he'd know where it came from". He also a dedicated recycler. I.e. he took stuff from you then passed it along to his cronies. They were a tough crowd. But, I guess extreme poverty and privation can do that to you. JMC seemed to go off the rails into meaness and pettiness as he aged.
Login

On this day in 1929, James Michael Curley, heavily favored to win his third term as mayor of Boston, used a radio appearance to defame a school committee member who had spoken out against him. The savage, and ungrounded, attack was unprecedented: his adversary was a woman, a wife, a mother, and popular civic volunteer. Curley's tactic of "do unto others before they do you" backfired, and he barely squeaked out a victory in the election two days later. One local newspaper would call it "one of the most dramatic incidents in the whole history of Boston politics." Between 1914 and 1950, the charismatic and resilient Irishman served four terms as Boston's mayor, one term as Massachusetts governor, and two terms in jail.

Although he would later sell insurance to support his family, by the time he was eligible to vote in 1896, Curley had decided that politics would be his chosen career. 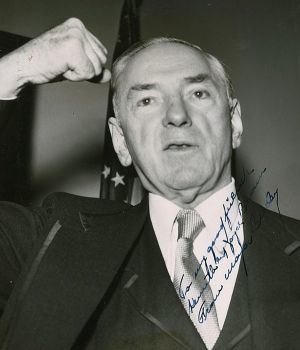 Few political figures of the twentieth century would be as controversial or as colorful as James Michael Curley. He employed a combination of cronyism, chicanery, and political patronage to dominate the Massachusetts political scene for more than three decades. His defenders note the progressive social legislation he championed and call him "Boston's Robin Hood." His critics point to the underhanded and illegal political tactics he condoned.

James Michael Curley was born in Boston in 1874, ten years after his parents emigrated from Galway, Ireland. The family lived in Ward Seventeen, an overcrowded slum. His father was a poorly paid unskilled laborer; his mother worked as a scrubwoman. His father died when he was 12, forcing him to leave school. The rest of his education was acquired in public libraries. In time, he would become a well-informed and eloquent public speaker.

The young man held a variety of jobs, but his true calling was politics. Although he would later sell insurance to support his family, by the time he was eligible to vote in 1896, he had decided that politics would be his chosen career. Two years later, James Michael Curley won his first elected office, a seat on Boston's Common Council. He would remain a force on the political scene for the next 50 years.

His motto — "Work harder than anyone else, preserve your self-respect and keep your word" — earned him the loyalty of working-class voters.

Curley had strong support among Boston's ethnic minorities, especially the Irish who made up about 40 percent of the city's population. His motto — "Work harder than anyone else, preserve your self-respect and keep your word" — earned him the loyalty of working-class voters. He was less concerned with ideas than with results: getting things done for those who needed it most. He was determined to improve the lot of Boston's poor and believed the ends justified questionable means.

His first brush with the law came in 1903 when he was running for alderman. He impersonated a constituent who wanted a post office job and took the civil service exam for him. Curley was recognized and prosecuted; he served 90 days in jail. But his slogan, "He did it for a friend," aroused public sympathy. Curley won the election in a landslide.

During four years in the U.S. Congress, he focused on fighting immigration restrictions. Never comfortable in the Washington milieu, he returned to Boston in 1914 and mounted a successful campaign for mayor. He would serve a total of four terms.

He enjoyed verbally attacking the Boston Brahmins, and he encouraged his Irish constituents to blame their woes on the Yankees.

Curley consolidated patronage under his personal control and then used his power to secure economic benefits and social amenities for Boston's working classes. He spent part of every day meeting with needy constituents and helping them find jobs, fuel, or food, or help with creditors, the police, or the courts.

He implemented a master plan based on the idea that the Yankee establishment could afford to finance uplift for the poor. He raised taxes and valuations to pay for massive public works projects, including libraries, health centers, improved roads, bridges, tunnels, subway stations, municipal buildings, parks, public beaches, bathhouses, and playgrounds. Many of Curley's programs foreshadowed Franklin Roosevelt's New Deal. (To the surprise of many people — and to the ire of Boston's Irish — Curley supported and campaigned for Roosevelt rather than his fellow Catholic Al Smith.)

Curley made many enemies in his long career. He enjoyed verbally attacking the Boston Brahmins, and he encouraged his Irish constituents to blame their woes on the Yankees. Many of the people who had long dominated the city came to feel unwelcome in Boston. The exodus of Protestants to the suburbs that took place during the Curley era left a lasting legacy.

Even a longtime opponent conceded, "The city would be a shabby place today without having had him."

The anti-Curley forces played a large role in bringing corruption charges against him in 1937 and again in 1946. At the first trial he was convicted on questionable testimony of receiving a bribe. Unable to pay the $42,629 fine, he avoided jail only when thousands of Bostonians contributed to a fund to cover his expenses. He was elected to his final term as mayor (while a member of Congress) in 1945. The next year, he was convicted on a somewhat spurious mail fraud charge; he served five months before President Truman commuted the sentence. On Thanksgiving Day, Curley returned to Boston to finish his term as mayor.

When Curley died in 1958, his body lay in state in the rotunda of the State House while faithful supporters filed by to pay their respects to the man his biographer would dub "the Rascal King." Even a longtime opponent conceded, "The city would be a shabby place today without having had him."

The city-owned Curley Mansion at 350 Jamaica Way in Jamaica Plain is on the Irish Heritage Trail.