From Cotton Mather's "Upon the Good Education of Children"

A Little Book to assist, The Education of Children, is now in your Hands. But can they be well Educated, if their Parents never send them to SCHOOL? This is a point that seems now to call for some Inculcation…. You will therefore pardon my Freedom with you, if I Address you, in the words of Luther:

"If ever there be any Considerable Blow given to the Devil's Kingdom, it must be, by Youth Excellently Educated. It is a serious Thing, a weighty Thing, and a thing that hath much of the Interest of Christ, and of Christianity in it, that Youth be well-trained up, and that Schools, and School-Masters be maintained. Learning is an unwelcome guest to the Devil, and therefore he would fain starve it out."

But we shall never long retain the Gospel, without the help of Learning. And if we should have no Regard unto religion, even the outward prosperity of a people, in this World would necessarily require Schools and Learned. Alas, that none are carried with Alacrity and Seriousness to take care for the Education of Youth and to Help the World with Eminent and Able men."

But the Freedom with which this Address is made unto you, is not so great as the Fervour that has animated it. My Fathers and Brethren, If you have any Love to God and Christ and Posterity; let [Godly] Schools be more Encouraged. ..

What about early education in Plymouth colony? There were two colonies in what is now Massachusetts in the 17th century. Your Mass Moment implies that there was only one.
firat education laws

Good point, though education in Plymouth Colony got off to a much slower start. In A Little Commonwealth: Family Life in Plymouth Colony, John Demos says that "for the first forty odd years of settlement there is only indirect evidence of the intent to found schools, and no evidence at all of schools in actual operation."

In Plymouth proper, there were efforts to start a school in the 1670s but they were "apparently not sustained, for two decades later its citizens repeatedly went on record with directives that the selectmen 'should Indeavor to get A schoolmaster to teacher Children to Reade and write.'"

On this day in 1642, Massachusetts Bay Colony passed the first law in the New World requiring that children be taught to read and write. The English Puritans who founded Massachusetts believed that the well-being of individuals, along with the success of the colony, depended on a people literate enough to read both the Bible and the laws of the land. Concerned that parents were ignoring the first law, in 1647 Massachusetts passed another one requiring that all towns establish and maintain public schools. It would be many years before these schools were open to all children. Only in the mid-nineteenth century was universal free public schooling guaranteed – in time, made compulsory — for Massachusetts children.

In 1789 Massachusetts was the first state in the nation to pass a comprehensive education law. 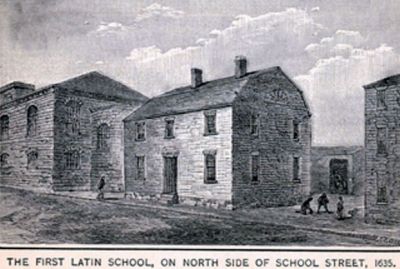 Colonial Massachusetts was among the very first places in the world to make the education of young people a public responsibility.

The English Puritans who settled Boston in 1630 believed that children's welfare, on earth and in the afterlife, depended in large part on their ability to read and understand the Bible. The success of the colony also rested on a literate citizenry; men should be able to read and understand the laws governing them. The founders of Massachusetts Bay recognized that the next generation would need leaders who were learned in theology, philosophy, and government. For both religious and political reasons, then, the Puritans began almost immediately to establish schools.

The first was the Boston Latin School opened in 1635, the nation's oldest publicly funded school. Unlike most schools in England, Boston Latin was not established by a church; it was created by the Boston Town Meeting. Voters agreed to use rents collected for Deer, Long, and Spectacle Islands in Boston Harbor to support the school and pay a schoolmaster.

A few other early Massachusetts towns followed Boston's example. In 1636, Charlestown voted to use the rent for one of the islands it owned for the maintenance of a school. The next year, the town of Salem opened a school, and two years later, Dorchester dedicated public funds "towards the maytenance of a schoole . . . [and] a schoole-master as shall undertake to teach english, latine, and other tongues, and also writing."

Selectmen were to keep "a vigilant eye over their brethren and neighbors," young people whose education was neglected could be removed from their parents or masters. 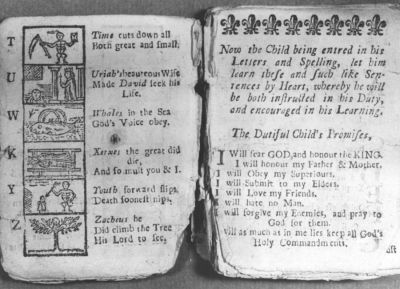 Called grammar schools, these early public schools were intended primarily for boys who were preparing to enter the ministry. All children in early Massachusetts were expected to learn to read and write, but most received a basic education at home from their parents.

It was not long before Puritan leaders began to worry that many parents were not fulfilling this obligation. In 1642 the General Court passed a law that required heads of households to teach all their dependents — apprentices and servants as well as their own children — to read English or face a fine. Parents could provide the instruction themselves or hire someone else to do it. Selectmen were to keep "a vigilant eye over their brethren and neighbors," young people whose education was neglected could be removed from their parents or masters.

Five years later, disturbed by what it perceived as persistent parental negligence, the General Court passed a more comprehensive law, the first to require that towns provide schools (although in practice the law was generally applied only to free, male, white children). All towns with 50 or more families were obligated to hire a schoolmaster to teach children to read and write. In towns of 100 or more families, the schoolmaster (who was usually a recent Harvard College graduate) had to be able to teach Latin as well. Responsibility for education was shifting from the family to the town.

The 1647 law eventually led to the establishment of publicly funded district schools in all Massachusetts towns. The schools were distributed around the town, so that no child had to travel more than a mile or two. The curriculum was basic — reading, writing, and arithmetic. In larger towns, a young man whose family could afford to forego his labor might attend a grammar school and, if he hoped to enter the ministry, Harvard College.

"by sad experience it is found that many towns that not only are obliged by law, but are very able to support a grammar school, yet choose rather to incurr and pay the fine or penalty than maintain a grammar school."

Public did not necessarily mean free. The law did not specify that towns had to pay the full cost. During the colonial period, many Massachusetts towns required students to cover part of the cost by paying tuition, supplying wood for the schoolhouse, or lodging for the schoolmaster.

Nor did public mean universal. At no point in the colonial period were parents required to send their children to school, and many poor children had to be satisfied with whatever education they received at home. Also, not all towns allowed girls to enroll in publicly-supported schools. Girls and very young children whose parents could afford the fees attended what were called "Dame Schools," where a local woman taught reading, writing, and sometimes domestic arts in her home.

Despite the threat of fines, the record books show that many towns were "shamefully neglectful" of children's education. In 1718 "by sad experience it is found that many towns that not only are obliged by law, but are very able to support a grammar school, yet choose rather to incurr and pay the fine or penalty than maintain a grammar school." Legislators increased the fines once more.

Some towns complied grudgingly if at all. Teachers often complained of schoolhouses that were freezing cold because townspeople failed to supply enough firewood. Schoolhouses were usually crude and poorly equipped. Most had little more than a chair for the teacher and benches for students, who were obliged to provide their own hornbook (alphabet sheet), spelling book, primer, catechism, and writing supplies.

Once children were old enough to help out on the farm, they usually attended school only in the winter months when their labor was not needed at home.

Colonial Massachusetts was an agricultural society. Once children were old enough to help out on the farm, they usually attended school only in the winter months when their labor was not needed at home. During the five- or six-month sessions, they learned reading, writing, and basic arithmetic.

When John Adams drafted the Massachusetts Constitution in 1780, he included provisions that guaranteed public education to all citizens. In 1789 Massachusetts was the first state in the nation to pass a comprehensive education law. In updating the colony's 1647 law, the legislature required all teachers in grammar schools to "provide satisfactory evidence" that they had received a formal education in a college or university and, equally important, were of good moral character. Even women who taught neighborhood dame schools were to be certified by the selectmen.

Just as it had in the colonial period, Massachusetts continued to set the standard for public education in the new United States.

On this day in 1845, the Massachusetts legislature guaranteed that every child in the state would have access to a public school. One source of pressure on the lawmakers was a petition submitted by a...