Portland, March 21 — Thursday last witnessed the birth of a new State, and ushered MAINE into the Union. The day was noticed, as far as we have heard from the various towns, by every demonstration of joy and heart-felt congratulation, becoming the occasion. In this town salutes were fired in the morning, at noon, and at sunset — the independent companies were under arms, and appeared in their usual style of military excellence — the ships in our harbour displayed their flags — the Observatory and adjacent buildings were brilliantly illuminated in the evening, and the celebration closed with a splendid ball. Gen. King, President of the Convention and acting Governor of the State, was in town making some necessary arrangements for the new government, and honored the company at the ball with his presence for a short time in the evening. He left this town on Friday — and was met at Brunswick by a large number of military officers mounted, together with a detachment of cavalry, and escorted to his seat in Bath.

Union Hall, in which the ball was held, was filled to overflowing with all that Portland can produce of elegance and fashion and beauty; its walls were decorated with national and military colors, tastefully festooned, giving a rich appearance to the room, and filling the soul with enthusiasm and patriotic feeling. In front of the orchestra, our national armorial, an eagle, lately killed in this neighborhood, spread his capacious wings, bearing on his breast a brilliant star, [signifying] the addition now made to our national constellation.

May the day, which has so auspiciously commenced our political existence as a State, long be remembered with complacent feelings, and every annual return bring with it, by the many blessings it may produce, additional inducements for its celebration.

On this day in 1820, Massachusetts lost over 30,000 square miles of land as its former province of Maine gained statehood. Mainers had begun campaigning for statehood in the years following the Revolution. The Massachusetts legislature finally consented in 1819. What no one in either Massachusetts or Maine foresaw, however, was that Maine's quest for statehood would become entangled in the most divisive issue in American history — slavery. Most Mainers supported abolition. They were dismayed that their admission to the Union was linked to the admission of Missouri as a slave state. This controversial "Missouri Compromise" preserved — for a few more decades — the delicate balance between pro- and anti-slavery forces in the U.S. Congress.

Determined to pay off its war debt to the new U.S. government, Massachusetts raised money by selling off public land in Maine. 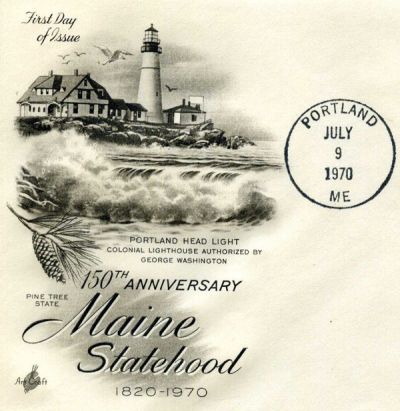 Although it started as a separate colony in the 1620s, from the 1650s until 1820 Maine was a part of Massachusetts. After the Revolution, people living in Maine began a 35-year campaign for statehood. Just as their effort was about to bear fruit, the question of statehood suddenly and unexpectedly became entangled with the thorny issue of slavery. The people of Maine, who were strongly abolitionist, found themselves in the odd position of opposing the very bill that would give them what they had sought for so long.

Maine had been administered as a district of Massachusetts since 1647. Before the Revolution, Maine had a population of only 10,000 people clustered around the southern coastal ports and closely identified with the shipping and trade interests of Massachusetts.

Maine's demographics changed dramatically in the early 1800s. Determined to pay off its war debt to the new U.S. government, Massachusetts raised money by selling off public land in Maine. Thousands of farm families left the increasingly crowded Bay State and flooded into Maine's vast interior. The population of the province grew from 91,000 in 1791 to nearly 300,000 in 1820.

As Maine grew, so did discontent with its political dependence on Massachusetts. Wealthy coastal merchants, who were eager to govern themselves, were the first to complain. But after Shays' rebellion caused such havoc in western Massachusetts, Maine merchants worried that they would need the power of Massachusetts if they were ever faced with a similar uprising. They decided to express their grievances rather than push for statehood.

Their list of grievances was long, and their egalitarian, fiercely democratic politics made them eager to break with Massachusetts.

But with the continued growth of the population outside established coastal towns, frustration spread to inland farmers. Unlike the coastal merchants, these folks had no common interest with the men who ruled Massachusetts and Maine.

By 1800 these inland farmers were leading the drive for statehood. Their list of grievances was long, and their egalitarian, fiercely democratic politics made them eager to break with Massachusetts.

The most common complaint was the distance Mainers had to travel to reach the General Court in Boston. A further irritant was the fact that Maine towns were under-represented in the Massachusetts legislature. Another source of dissatisfaction was a law that reduced the price of Maine lumber, enriching Massachusetts at the expense of Maine. And Massachusetts tax laws appeared unfair to Maine farmers. For example, they complained bitterly that because the cost of raising sheep in Maine was so much higher than in Massachusetts, their sheep should be taxed at a lower rate.

The War of 1812 destroyed any affection that Mainers may have retained for Massachusetts. The Massachusetts General Court failed to take any action to protect Maine. It was clear that, lacking the votes to influence the legislature, Maine could expect its interests to be sacrificed to those of Massachusetts. Vigorous campaigning for statehood began in 1815.

The bill for Maine's statehood came before Congress in December of 1819, just at the time that the slave-holding territory of Missouri was campaigning for statehood.

Over the next four years, Maine passed several referendums supporting statehood, but none of them persuaded the Massachusetts General Court to take action. Finally, in the summer of 1819, the people of Maine voted so overwhelmingly for statehood that Massachusetts could no longer ignore the issue. Delegates gathered in Portland in October to frame a constitution for their new state.

Although its pride was wounded, the Massachusetts legislature conceded, reluctantly passing a statehood bill for Maine in late 1819. There was only one condition. Statehood required the approval of Congress and the president. If statehood was not approved by March 4, 1820, Maine would remain a part of Massachusetts.

It seemed a simple stipulation. Both parties had agreed to the separation. Congress and the president could have been expected merely to rubber-stamp the deal. But they did not.

The bill for Maine's statehood came before Congress in December of 1819, just at the time that the slave-holding territory of Missouri was campaigning for statehood. There were an equal number of slave and free states, and abolitionists were fiercely opposed to any more slave states entering the Union.

To prevent the spread of slavery, they found themselves calling for the defeat of the very bill that would have granted them long-sought statehood.

Maine's application offered the possibility of a compromise. To maintain the balance, the two requests for statehood would be packaged together — one new slave and one new free state. Maine suddenly found itself in the midst of a heated controversy.

Abolitionists all over the Union were dead set against the admission of any new slave states. Many Mainers, themselves ardent abolitionists, were deeply ambivalent. To prevent the spread of slavery, they found themselves calling for the defeat of the very bill that would have granted them long-sought statehood.

While the battle raged in Congress and across the nation, the March 4th deadline was fast approaching. At the last minute, the bill for Maine statehood passed Congress; on March 3, 1820 it was signed into law. Maine was admitted as a free state less than two weeks later; Missouri joined the Union as a slave state in 1821. In spite of what many had hoped, this solution, called the Missouri Compromise, did not resolve the issue of slavery. The larger question would persist for another 40 years until it was finally, and tragically, decided by war.

On this day in 1815, news reached Boston that the War of 1812 was over. The U.S. had at first been a neutral party in a conflict between Britain and France. But when the British...