Public address delivered by Boston Mayor Josiah Quincy to the Masons and others who built the MGH at the foundation-laying ceremony.

I am requested by the Trustees of the Massachusetts General Hospital to express to you … congratulations on this interesting occasion. You and they will be pleased to accept the thanks of the Trustees for the countenance and aid you have given this institution by thus condescending to assist by laying its foundations, according to the rules of art, and with those solemn and mysterious forms and ceremonies which ancient wisdom has prescribed.

Indeed, the foundations of a noble charity have this day been laid, a charity destined to confer lasting blessings on future times, as it has already conferred immortal honor on the present; - a charity, of which it well becomes a citizen of Massachusetts to speak in the language of pride and exultation.

Quoted in A History of the Massachusetts General Hospital (To August 5, 1851), by Nathaniel Bowditch (Trustees from the Bowditch Fund, 1872).

On this day in 1821, the Massachusetts General Hospital admitted its first patient, a 30-year-old sailor. More than a decade earlier, two Boston doctors had appealed to the city's "wealthiest and most influential citizens" to establish a general hospital. The War of 1812 delayed the dream, but on July 4, 1818, the cornerstone was finally laid. The original building, designed by Boston's leading architect Charles Bulfinch, is still in use. One of the world's great centers of medical research and treatment has grown up around it. The original domed operating amphitheater, where anesthesia was first publicly demonstrated in 1846, is now a Registered National Historic Landmark. MGH has achieved countless medical milestones, including the first successful reattachment of a human limb.

Not all gifts were in cash: one man donated a pig "of an uncommonly fine breed" another gave an Egyptian mummy, which the Trustees rented out for exhibition, raising $1,200. 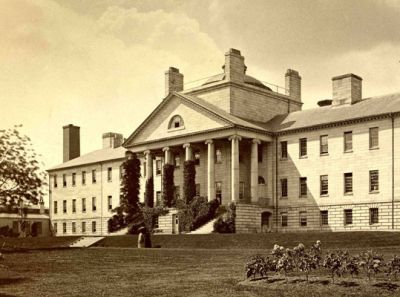 By 1800, seriously ill Europeans were accustomed to seeking care in general hospitals; in the United States, things were different. There were only two general hospitals in the entire nation: Pennsylvania Hospital, which had opened in Philadelphia in 1756, and the New York Hospital, which followed in 1791. For the most part, Americans who fell sick were treated at home by family members and lay healers. Increasing numbers of affluent families sought the services of physicians, but most people viewed institutional medical treatment with distrust. In colonial New England, families expected to care for their own; only individuals without family connections or resources — the destitute, the insane, criminals, or members of the military — were confined in public institutions such as military hospitals and almshouses.

In the early 1800s, reformers began to see civic institutions as a way to address social ills. They established asylums for the mentally ill, criminals, orphans, the poor, the blind, the deaf, and the sick. At the same time, doctors sought to elevate the status of their profession through more uniform and scientific training. Hospitals and medical schools grew hand in hand.

. . . only individuals without family connections or resources — the destitute, the insane, criminals, or members of the military — were confined in public institutions such as military hospitals and almshouses. 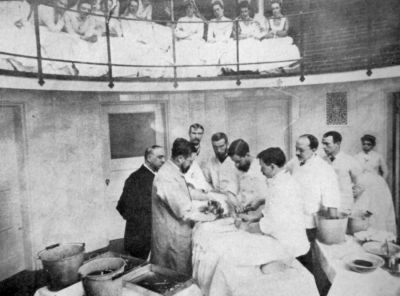 In March of 1810, a group of prominent Boston men set out to create a general hospital that would care for both the physically and mentally ill. The doctors involved in the project realized that having a hospital in Boston would improve the teaching of Harvard Medical School students. Up to that point, the training of men who called themselves doctors varied enormously, ranging from apprenticeship with another physician to self-instruction. A medical school associated with a well-run hospital would provide excellent medical training, attract aspiring doctors, and raise the standards of both medical education and medical treatment in New England. "A hospital," one fundraising letter pointed out, "is an institution absolutely essential to a medical school, and one which would afford relief and comfort to thousands of the sick and miserable."

In February 1811, the Massachusetts legislature granted a charter for the Massachusetts General Hospital. The lawmakers required that the hospital take care of patients regardless of citizenship, social class, or income, although it was of course permitted to exclude women from its training programs.

"A hospital," one fundraising letter pointed out, "is an institution absolutely essential to a medical school, and one which would afford relief and comfort to thousands of the sick and miserable."

The hospital campaign had wide popular appeal. Between December of 1816 and March of 1817, 1,047 individual donors contributed over $107,000. Not all gifts were in cash: one man donated a pig "of an uncommonly fine breed" another gave an Egyptian mummy, which the Trustees rented out for exhibition, raising $1,200.

The Trustees' highest priority was the opening of a mental hospital. In 1816 they purchased an estate in what was then Charlestown, and on October 6, 1818, the institution that would eventually be known as McLean Hospital admitted its first patient. Meanwhile, a four-acre parcel on the Boston side of the Charles River was acquired for the General Hospital. Architect Charles Bulfinch incorporated state-of-the-art central heating and plumbing into his classic design for the granite building. On September 3, 1821, the Massachusetts General Hospital admitted its first patient. Two years later, the building was complete.

As the first and largest training ground for Harvard medical students, the hospital soon established Boston as one of the nation's premier centers of medical education.

From the day the hospital opened its doors, it afforded Harvard Medical School students and professors the best medical environment in New England. As the first and largest training ground for Harvard medical students, the hospital soon established Boston as one of the nation's premier centers of medical education. Mass General has also evolved into a top-tier medical research institution, with a research budget of more than $800 million and a top recipient of research funding from the National Institutes of Health (NIH). Between the education of medical students and scientific research, MGH has an impact on the health of many beyond the state of Massachusetts.

MGH's original 73 beds have grown to over 1,000; the hospital's staff care for over 1,500,000 patients a year; around 100,000 of them in its acclaimed Emergency Department. Mass General conducts the largest hospital-based research program in the United States.

The Bulfinch Building is dwarfed by the enormous medical complex that has risen around it, but it still stands, a testimony to the hospital's modest beginnings.

A visit to the Paul S. Russell, MD Museum of Medical History and Innovation is a great way to learn about the history of Massachusetts General Hospital and its commitment to patient care and medical research. The Ether Dome may be visited during regular business hours, unless a meeting is being held in the space.

History of the Massachusetts General Hospital, by N. I. Bowditch (Arno Press, 1972).

Every Man Our Neighbor: A Brief History of the Massachusetts General Hospital, 1811-1961, by Joseph E. Garland (Little, Brown and Company, 1961).

The Discovery of the Asylum: Social Order and Disorder in the New Republic, by David J. Rothman (Little, Brown and Company, 1971).