There are, therefore, good reasons why Boston should bear its proportion of the cost of acquiring these metropolitan reservations.

Not only is this proposed action of great value to Boston in securing desirable sites for such pleasure grounds in all directions about the city for the benefit of its teeming and rapidly increasing population, but it is of equal value in assuring the permanence and increase of one of the most essential elements of the city’s present and future development; that is, its attractiveness as a great and thoroughly equipped social centre.

The number of persons drawn to Boston by its general advantages in the way of a beautiful and well-cared-for modern capital—its educational facilities, its music, its museums, its artistic character and its beautiful suburban and rural surroundings—is enormous. The numbers increase extensively year by year, and this forms one of the chief elements in a city’s growth in desirable population and its marvellously augmenting prosperity.

It is therefore essential that these elements of attractiveness should be maintained and enhanced, and their permanence assured. Many of these picturesque and beautiful sites in the surrounding country form features by no means slight among these elements of attractiveness. Hence it seems important that these various tracts should be immediately acquired, for the reason that all of them can now be secured at comparatively small cost, and all would be for the common benefit of the metropolitan district.

On this day in 1893, Governor William Eustis Russell signed a bill creating the Metropolitan Parks Commission, the nation's first regional park system. It was the result of planning and politicking by a group of far-sighted Bostonians concerned about rapidly disappearing open space. With its first funding, the new commission acquired over 7,000 acres in the space of 18 months. By 1900, it had protected 9,000 acres and built nine scenic parkways within 12 miles of Boston. Now managed by the Massachusetts Department of Conservation and Recreation, this system encompasses almost 20,000 acres and includes woodlands, beaches, swimming pools, skating rinks, bicycle paths, and — perhaps its best-known site — the Charles River Esplanade.

When the first subway was built to serve this area, it was called the "Green Line" in recognition of the arboreal pathway above. 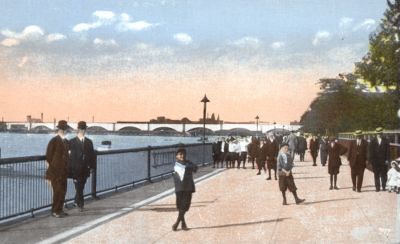 As metropolitan Boston grew in the late nineteenth century, open space around the city was disappearing at an alarming rate. Other large American cities faced the same problem and addressed it by constructing large parks in or near downtown. A group of public-spirited Bostonians had a different idea. They proposed to encircle Boston with open space.

The men behind this movement believed that people's physical, mental, and spiritual well-being all depended on being able to escape urban congestion. Charles Eliot, a leading voice in the call for preserving green spaces, explained, "The life history of humanity has proven nothing more clearly than that crowded populations, if they would live in health and happiness, must have space for air, for light, for exercise, for rest, and for the enjoyment of that peaceful beauty of nature which, because it is the opposite of the noisy ugliness of towns, is so wonderfully refreshing to the tired souls of townspeople."

The desire to provide urbanites with restful green spaces was evident in the creation of the first "garden cemetery" in Cambridge in 1831 and Boston's Public Garden in 1839. But the "parks movement" — the attempt to design natural landscapes for the benefit of city residents — did not take hold in Boston until after the Civil War when rapid development threatened to consume all the remaining open space.

". . . crowded populations, if they would live in health and happiness, must have space for air, for light, for exercise, for rest, and for the enjoyment of that peaceful beauty of nature . . ."

At first, the effort was piecemeal. Groups responded when particular parcels were at risk. In the late 1880s efforts were mounted to save Waverly Oaks, an ancient stand of trees in the Boston suburb of Belmont. Another group tried to stop development of the Middlesex Fells, a major woodland northwest of the city.

Two men took the lead in advocating for a more comprehensive approach. Charles Eliot, a former apprentice of the great landscape architect Frederick Olmsted, wrote in March of 1890 about the need for cities and towns around Boston to join forces to protect places of "uncommon beauty, well known to all lovers of nature near Boston . . . in daily danger of utter destruction." Three months later, Sylvester Baxter, a writer for the Boston Herald, produced a series of articles calling for a new form of metropolitan government to oversee a regional park system. Soon the two men were working together to marshal support and produce a plan.

They faced a daunting challenge. Cities and towns would have to overcome long-standing rivalries and the territorial concerns of local officials. Because many of the scenic areas crossed town boundaries, regional cooperation was essential.

Charles Eliot . . . wrote in March of 1890 about the need for cities and towns around Boston to join forces to protect places of "uncommon beauty, well known to all lovers of nature near Boston . . . in daily danger of utter destruction."

Eliot and Baxter launched an ambitious public relations effort. They scored a major success when, in the spring of 1892, the state legislature authorized a temporary Metropolitan Park Commission to prepare an official report. The two men were leading members of the commission; within a few months they were taking town officials on tours of the sites they wanted to preserve. Late in the winter of 1892, the commission submitted to the legislature a bold and visionary plan.

It proposed circling the city with a continuous string of existing green spaces that would encompass islands in the harbor, beaches, riverbanks, wetlands, and woodlands. The land would be purchased by state funds and administered by a regional park authority. "Special pleasure-ways, or roads for light traffic" would carry people from urban neighborhoods to the outlying parks — and, an added benefit, create a new way for people to travel from their homes in the growing suburbs to their jobs in the center city.

In June of 1893, the legislature officially created the Metropolitan Parks Commission. The first projects the MPC undertook were "reservations" at the Blue Hills, Middlesex Fells, and Waverly Oaks; reviving riverbanks, beaches, and harbor islands; and a green corridor from Boston Common down a tree-lined Commonwealth Avenue to the Fenway and beyond. When the first subway was built to serve this area, it was called the "Green Line" in recognition of the arboreal pathway above.