Another perspective on the MA Constitution

Just wondering about another perspective of this document put forth in the study of Shay's Rebellion by Leonard Richards: to the effect that it represented the eastern elite of Massachusetts and was not favored by the towns in the center and west of the state. The winter of 1779-80 had been so harsh that many towns were not represented in the discussions because the delegates could not travel to Boston.
Another perspective on the MA Constitution

Yes, this is an important perspective. The tensions between eastern and western Massachusetts during this period are explored more fully in the MassMoment for July 20 - Giant Cheeseball. You can access this moment by entering "cheese" or "western" or any other appropriate keyword in the "Search Moments" box. Thanks for the comment.
Another perspective on the MA Constitution

I remember reading somewhere that the reason the new state constitution changed the state's name from "Massachusetts Bay" to "Massachusetts" was as a concession to the Western towns, who lived nowhere near a "bay."
Another perspective on the MA Constitution

And that same dichotomy held at the ratifying of the Federal Constitution, ten years later, where the opposition tended to come from west of the current Rt 128/95.
Oldest Written Constitution

Yes it is. The first constitution of Iceland was approved in 1870 and it has been significantly amended since. See this link: http://www.iceland.is/government-and-politics/Government/StateSymbols//nr/44
Oldest Written Constitution

Sorry, I was confusing it with the Icelandic Parliament. ------------------------- Lisa Deeley Smith Village Help for South Sudan http://www.villagehelpforsouthsudan.org
The Commonwealth's Constitution

The concluding paragraph of today's Mass. Moment contains a quoted reference to the, "State of Massachusetts Bay." Does anyone know when the word Bay was dropped from the name and when Massachusetts became a Commonwealth as opposed to a state? The current constitution clearly indicates the use of "The Commonwealth of Massachusetts." Some other observations on the Massachusetts Constitution: The other two members of John Adams' committee were Samuel Adams and James Bowdoin. The Moments also presents some confusion when it points out MA was the last of the orginal 13 colonies to adopt a state Constitution yet we have the oldest written state constitution still in use. To clarify the confusion it should be pointed out the others later repealed their constitutions and introduced subsequent versions of newer and different constitutions. Hence, MA is the oldest written constitution in continuous use. One other observation, the MA Constitution, compared to the others of the time, had a highly organized structure. It contained articles, chapters, sections whereas the others were a list of provisions. This structure was latter incorporated into the U. S. Constitution.
Login

On this day in 1780, the Massachusetts constitution was declared ratified. The previous fall, the world's first constitutional convention had met in Cambridge. A committee was chosen to write a constitution for the new state; the group delegated the task to John Adams, a fortunate choice. A well-read lawyer who wrote with clarity and elegance, he completed his draft on October 30, 1779. The convention approved it with minimal changes and submitted it to the people. Town meetings all over Massachusetts debated its merits. When the votes were counted on June 15th, more than two-thirds were in favor. A fractious citizenry had approved the constitution.The document became a model for other states and nations. It is the oldest written constitution in the world still in use.

. . . the diffusion of knowledge, Adams wrote, was essential if people were to govern themselves wisely and protect their liberties. 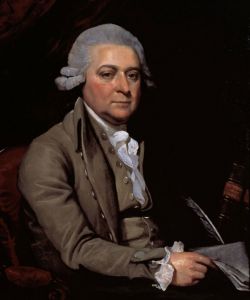 Early in June of 1774, a Boston newspaper published the text of a measure recently enacted in London. The British Parliament had tightened its control over the troublesome Massachusetts Bay Colony by giving the royal governor power over local government, the courts, and the legislature.

The people of Massachusetts were astonished — and outraged. They responded immediately. When the governor attempted to dissolve the General Court at Salem, the members locked the doors of the courthouse. That act of defiance effectively marked the end of royal government in Massachusetts.

The colonists now faced the challenge of creating a workable form of self-government. Massachusetts towns were highly politicized; getting them to agree on a plan proved to be a formidable task. Although the Bay Colony was the first of the original 13 to cast off royal authority, it was the last to adopt a new constitution. In the end, it took the wisdom, skill, and experience of John Adams to craft a document on which the people could agree.

In the words of one historian, "rule by the charter of kings was gone; government by the consent of the people had not arrived."

During much of the Revolutionary War, legal business in Massachusetts effectively functioned on the local level. Towns elected representatives to a Provincial Congress, but that body had no formal authority to make or enforce laws. There was no governor. Courts met in some counties but not in others. Individual towns made their own codes. In the words of one historian, "rule by the charter of kings was gone; government by the consent of the people had not arrived."

The confusion caused anxiety and consternation. As early as 1776, towns such as Stoughton, Bellingham, and Pittsfield began to agitate for a state constitution. When a constitution, prepared by a committee, was submitted to the voters for approval in March of 1778, it was resoundingly defeated. Voters rejected provisions that restricted the franchise, gave too much power to the governor, and failed to provide a bill of rights.

Another effort was made the following year. This time, a new process was tried. Towns elected delegates to a constitutional convention, the first of its kind in the world. On September 1, 1779, 250 men gathered at the First Church in Cambridge. They appointed a committee of 30 to draft a constitution; this group assigned the task to three men, who asked John Adams to take the lead.

Authority derived from a social compact in which each citizen agreed to be "governed by certain laws for the common good."

Adams returned to his farm in Braintree. For several weeks he studied the constitutions already framed by other states and reread his own and others' essays on government. Then, standing at a plain tall desk, he began to write. The draft was finished, printed, and ready for public review on October 30, 1779.

One of the state's most talented and successful lawyers, Adams was well versed in English law and philosophy and a respected authority on constitutional law. He had a brilliant mind and an elegant prose style. The document he produced in the fall of 1779 has endured, with subsequent amendments, for over 230 years.

It was a model of clarity. Beginning with a preamble, it affirmed the ideal of government as existing to protect the natural rights of mankind. Authority derived from a social compact in which each citizen agreed to be "governed by certain laws for the common good." A Declaration of Rights followed; it asserted that all men were "born equally free" and shared "natural, essential, and unalienable" rights, including freedom of speech, freedom of press, trial by jury, and freedom from unreasonable searches and seizures.

Adams's draft proposed that the people of Massachusetts were to govern themselves through three separate and balanced branches of government; he called for a "government of laws, and not of men."

Adams's draft proposed that the people of Massachusetts were to govern themselves through three separate and balanced branches of government; he called for a "government of laws, and not of men." One notable section called for the government to encourage education, arts, and sciences; the diffusion of knowledge, Adams wrote, was essential if people were to govern themselves wisely and protect their liberties.

In March of 1780, the constitutional convention approved almost all of Adams's work. The delegates deleted the reference to freedom of speech and declared religion a right and duty of man. One small but important change turned "born equally free" into "born equal," a phrase that would be used in successful efforts to win the freedom of several enslaved African Americans. These trials are often recognized as important moments leading to the end of slavery in Massachusetts. With these and a few other alterations, the convention approved the document. At town meetings that spring, the constitution was discussed and voted on. All free males were entitled to cast ballots; 16,000 of them did.

On June 15, 1780, a committee appointed to review the returns announced that "The people of the State of Massachusetts Bay have accepted the Constitution as it stands." The next day, the constitution was declared ratified; it went into effect on October 25, 1780.

The Treasures Gallery in the Commonwealth Museum features a handwritten draft of the Massachusetts Constitution.

Brief History of the Constitution and Government of Massachusetts, by Louis Adams Frothingham (Harvard University Press, 1916).