On the evening of October 1, 1847, there was a party of invited guests at the Mitchell home. As usual, Maria slipped out, ran up to the telescope, and soon returned to the parlor, and told her father that she thought she saw a comet. Mr. Mitchell hurried upstairs, stationed himself at the telescope, and as soon as he looked at the object pointed out by his daughter declared it to be a comet. Mitchell, with her usual caution, advised him to say nothing about it until they had observed it long enough to be tolerably sure. But Mr. Mitchell immediately wrote to Professor Bond, at Cambridge, announcing the discovery. . . .

"It has been very interesting to watch the motion of this comet among the stars with the great refractor; we could almost see it move. An account of its passage over the star mentioned by your father when he was here, would make an interesting notice for the foreign journals, which we would readily forward."

Frederick IV., King of Denmark, had offered . . . a gold medal of the value of twenty ducats to the first discoverer of a telescopic comet. Edward Everett, President of Harvard College, wrote, to Maria Mitchell on March 29, 1849:

"I have the great pleasure to inform you that your medal arrived by the last steamer."

The use of the phrase "bookish librarian" to contrast with Mitchell as a successful scientist fosters the foolish notion that these are somehow opposites. ------------------------- James Hayes-Bohanan Professor of Geography Bridgewater State University
Login

On this day in 1847, 29-year-old Maria Mitchell stood on the roof of her parent's Nantucket home, focusing her telescope on what she believed to be a faraway star. Suddenly she realized that the blurry light was not a star at all, but a comet. The first woman to record a "telescopic" comet sighting, she immediately captured the imagination of America and of the world. In 1865 she was appointed the first professor, male or female, at the newly founded Vassar College in Poughkeepsie, New York. She would live, study, and teach there for the next 23 years. Aware of her status as a pioneer woman scientist, Maria Mitchell became an active supporter of the woman's rights movement. She continued her astronomical research until her death in 1889.

She was the first woman elected to membership in the American Academy of Arts and Sciences in 1848 and the first admitted to the Association for the Advancement of Science in 1850. 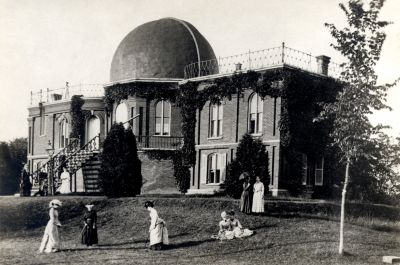 The evening of October 1, 1847 began as most evenings did for Maria Mitchell. From the small observatory on the roof of her home in Nantucket, the amateur astronomer "swept" the night sky, as was her habit, searching for anything new or different. At 10:30 that night, Maria spotted a blurry, fuzzy body in the upper right hand corner of her telescope's field.

She ran downstairs to tell her father, a cashier at the Nantucket Pacific Bank and a skilled amateur astronomer himself. William Mitchell followed his daughter to the rooftop, where he carefully compared the small object in the telescope with the stars near it and the chart on the table. He confirmed what Maria had suspected: she had discovered a comet.

Once reported to and acknowledged by leading astronomers, the comet was named in her honor, propelling her to the forefront of contemporary astronomy and changing the course of her life dramatically. Almost overnight, she was transformed from a bookish librarian and amateur stargazer into "the Lady Astronomer," a quasi-celebrity whose story was told and retold in newspapers across America.

Once reported to and acknowledged by leading astronomers, the comet was named in her honor, propelling her to the forefront of contemporary astronomy and changing the course of her life dramatically.

The discovery of a comet was not a particularly unusual event in the nineteenth century, but female astronomers were very rare, and Maria Mitchell captured the public's imagination. Frederic VI, the King of Denmark, presented her with a gold medal to honor her achievement. She was the first woman elected to membership in the American Academy of Arts and Sciences in 1848 and the first admitted to the Association for the Advancement of Science in 1850.

Maria Mitchell's achievement would not have surprised her parents. Born in Nantucket on August 1, 1818, the third of ten children, she demonstrated from a young age both a love of stars and a talent for mathematics. Recognizing his daughter's talent, her father gave her the best scientific education he could.

In 1836 Maria went to work as the librarian at the newly opened Nantucket Atheneum, a position she would hold for the next 20 years. She took advantage of the institution's collections to give herself the equivalent of a college education; she taught herself mathematics, including calculus, and the most advanced astronomy of her day. Her discovery of the comet was due as much to the years she spent studying in the Atheneum and working with her father's telescope as it was to good luck.

"My desire is now and always has been," he wrote in 1864, "to make our College, not only a college to educate Women, but a college of instruction by women."

In 1862 she was invited to join the faculty of Vassar Female College, the first college in the country exclusively for women. Backed by wealthy brewer Mathew Vassar, the institution was still in the early stages of development when Vassar decided that Maria Mitchell should serve as the college's first professor of astronomy. He was especially eager to add a woman to the faculty. "My desire is now and always has been," he wrote in 1864, "to make our College, not only a college to educate Women, but a college of instruction by women." The Civil War delayed construction. Vassar did not admit its first students until September 1865. Maria Mitchell was one of eight charter professors.

Vassar provided Mitchell with a brand-new, state-of-the-art observatory. She became known as an exacting teacher, who insisted on accuracy and was impatient with even the slightest carelessness, often lecturing students for ignoring one-hundredth of a second in an astronomical calculation. Yet Maria Mitchell inspired great respect in her students, some of whom discovered comets and nebulas themselves.

"I wish," she once said, "we could give to every woman who has a novel theory dear to her soul for the improvement of the world a chance to work out her theory in real life."

Mitchell understood the significance of her position as a pioneer in women's education and became an advocate for woman's rights. "I wish," she once said, "we could give to every woman who has a novel theory dear to her soul for the improvement of the world a chance to work out her theory in real life." Her circle of friends came to include suffrage leaders Elizabeth Cady Stanton and Julia Ward Howe. In 1875 she was elected president of the American Association for the Advancement of Women.

Poor health forced Mitchell to resign from Vassar in 1888 at the age of 70. She moved to Lynn and attempted to continue her research there, but the observatory she had constructed was more of a morale booster than anything else. Her condition quickly deteriorated, and she died on June 28, 1889.

The Maria Mitchell House on Nantucket is open seasonally.

Places Where Women Made History

Sweeper in the Sky: The Life of Maria Mitchell, by Helen Wright (College Avenue Press, 1997).