Back when she was a graduate student at Harvard, far from her native South Africa, Margaret Hilary Marshall found her calling in a particular form of persuasion.

It was the early 1970s, and Marshall, then in her mid-20s and studying education, spent much of her time fighting apartheid, encouraging the US government to impose economic sanctions on South Africa. As she traveled across a foreign country, addressing nonprofit groups and churches, she found herself face-to-face with people whose world views were vastly different from her own.

"Going to Nebraska, talking to a group of religious women, that's what did it for me," Marshall said back then. "To talk to people who didn't agree with you, and who risked something if they changed, that was exciting. Those were the Americans I fell in love with."

Three decades later, observers see that same spirit in Marshall's tenure as chief justice of the Massachusetts Supreme Judicial Court, and especially in the 50-page decision she penned in favor of gay marriage. It's written in colloquial, conversational tones, with blunt sentences and hints of humor — aimed as much at the street level as at fellow jurists, said Laurence H. Tribe, a professor of law at Harvard University.

The writing seems "designed to speak to people who may begin with an almost instinctive reaction of rejection," Tribe said. "It's fully cognizant of how it's swimming upstream."

. . . many [observers] also note that Marshall has long been acutely aware of the Massachusetts high court's place in history, and is eager to preserve its legacy.

Day after day I find the Mass Moments fascinating and beautifully presented, and the primary source links are often as interesting as the main texts of Mass moments. This one is certainly interesting, and augments the main text, but it seems odd that it's just listed as "newspaper, 2003." Why not identify the newspaper and the date of publication more specifically? Is there some sort of convention here that I haven't noticed before?
Primary source citation

No, there is no new convention - our apologies for the oversight. If you actually click on the Primary Source it will show you that the citation is from the Boston Globe, November 20, 2003.
Login

On this day in 2003, a narrow majority of the Supreme Judicial Court ruled in favor of same sex couples' right to marry. In her opinion, Marshall wrote that the Massachusetts Constitution "affirms the dignity and equality of all individuals" and "forbids the creation of second-class citizens." Marshall won both accolades and condemnation for her support of same-sex marriage. Opponents claimed that her ruling amounted to a redefinition of the family and constituted a threat to traditional values. Marshall argued that her stand was consistent with the importance she had always placed on individual rights. Massachusetts became the first state to legalize same-sex marriage. 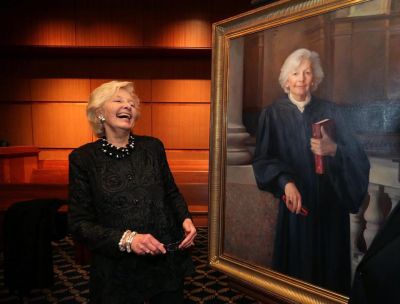 For more than three centuries, the Massachusetts Supreme Judicial Court has been known for its political independence and protection of individual rights. Although Margaret Marshall's personal history was compatible with this tradition, controversy has marked both her nomination and her rulings.

Marshall was born in South Africa in 1944. She grew up during the apartheid era, when a repressive white minority government ruled the country. The London Times would arrive on her family's doorstep each morning with articles snipped out by government censors. Books were banned, free speech was suppressed, and protesters were imprisoned. The minority-white government denied the country's black majority the right to own property, vote, attend school, or travel freely.

Even as a young woman, Margaret Marshall recognized that one of the worst crimes committed in the name of apartheid was to deprive black people of access to justice. "There were a few courageous [lawyers] who agreed to represent people charged with political crimes, but, by and large," Marshall later recalled, "if you were a black South African, you had no justice."

Marshall later recalled, "if you were a black South African, you had no justice."

Margaret Marshall first came to the United States as a high school exchange student. It was 1962, John F. Kennedy was president, and the civil rights movement was gaining strength. She remembered reading books that were banned in South Africa and being "able to think freely and speak freely, and [she] went back to South Africa with a taste of what democracy can be."

When Marshall returned home, she immediately joined a student organization dedicated to ending apartheid and achieving equality for all South Africans. She worked passionately for the cause, and eventually became president of the group. She promoted nonviolent tactics, leading vigils, petitioning for changes in the law, and raising money to help the families of black South Africans who were the victims of political persecution. In 1968 Margaret Marshall concluded that change was still a long way in the future, and she knew that her personal safety was threatened. Like so many other young South Africans, she left the country.

Upon her return to the United States, she enrolled in law school. After graduation, she became a U.S. citizen and began practicing law in Massachusetts. In 1991 she became General Counsel at Harvard University, and five years later, was nominated to the Supreme Judicial Court. Serving on the SJC would, she believed, provide an opportunity to continue the fight against oppression in any form. "Justice," Marshall has said, "is not hypothetical to me."

"Justice," Marshall has said, "is not hypothetical to me."

When Governor Paul Cellucci nominated her to be Chief Justice, the choice was greeted with both criticism and praise. Citing her pro-choice record, some people made the claim that she was anti-Catholic. Others objected that while serving as General Counsel at Harvard, she had failed to support a black student who charged the university police with racism. Marshall's allies came to her defense, and in the fall of 1999, the Governor's Council voted to confirm her appointment as Chief Justice by a vote of six to three.

The controversy surrounding her appointment pales in comparison to the storm that broke in November 2003 when a narrow majority of the court ruled in favor of same sex couples' right to marry. In her opinion, Marshall wrote that the Massachusetts Constitution "affirms the dignity and equality of all individuals" and "forbids the creation of second-class citizens." Marshall won both accolades and condemnation for her support of same-sex marriage. Opponents claimed that her ruling amounted to a redefinition of the family and constituted a threat to traditional values. Marshall argued that her stand was consistent with the importance she had always placed on individual rights. Neil Rudenstine, former president of Harvard, said that the "experience of seeing so many people deprived of rights has given her a special sensitivity" to the need to protect each and every individual's rights under the law. The same sex marriage case, like others the SJC decided during her tenure, can be seen as a direct legacy of Marshall's years in South Africa.

The Supreme Judicial Court is located in the John Adams Courthouse, which is open to the public.

"The Judge on the Front Lines of Culture War," by Sara B. Miller, The Christian Science Monitor, November, 21, 2003.

"A Bold Stroke," by Emily Bazelon in Legal Affairs