Order from the General Court of the Massachusetts Bay Colony

"There shall be a plantation at Marble-Head and the inhabitants now there shall have liberty to plant and improve such ground as they stand in need of, and that as said plantation increaseth the inhabitants of Salem shall [part] with such ground as shall be improved by them thereabouts being payed for their labor and costs…..[and] Mr. John Humphrey was to improve the land between the Cliffe and Forest River, and dispose of it to the inhabitants of Marble-Head as they stood in needs; the only charge to the purchaser being enough to recompense him for the labor and costs bestowed upon it."

Quoted in The Founding of Marblehead, by Thomas E. Gray (Gateway Press, 1984)

On this day in 1635, the General Court of Massachusetts Bay established the town of Marblehead on land that belonged to Salem. The move was meant to punish Salem for allowing Roger Williams to express his "dangerous opinions." Marblehead residents, who never saw eye-to-eye with their more devout neighbors, were delighted, but less than a year later, the lawmakers reversed themselves. Marblehead finally became independent of Salem in 1649. The feisty fishermen of Marblehead were not the last to go their own way. Danvers, Peabody, Beverly, Manchester-by-the-Sea, Wenham, and a section of Topsfield were all once part of Salem. One by one, smaller new towns were formed out of one large old one. This pattern was repeated many times over the next 200 years.

The area of Salem known as Marblenecke or Marble Head was settled largely by men and women from the English counties of Cornwall, Devon, and Dorset. 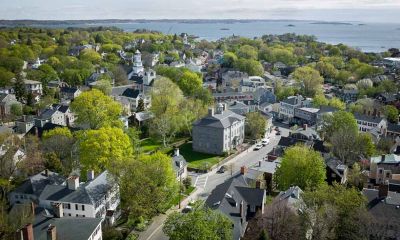 The English who settled the Massachusetts Bay Colony created large towns out of the land they bought or negotiated from Native Americans. Acreage close to the town center was promptly subdivided into farms; settlers who came later were assigned lots farther away. When a town had as many households as its farm land could support, newcomers and the younger generation established new towns further west. So it was that Watertown "seeded" Sudbury in 1634; just 20 years later, Sudbury "seeded" Marlborough.

While new towns were being founded further inland, the coastal settlements were gradually breaking into smaller towns. Ipswich once included Hamilton and Essex. Newbury would in time divide into five towns. In 1635 Concord encompassed what we now know as Carlisle, Lincoln, Acton, and a part of Bedford. The stories of how new towns came to be are as varied as the people who created them, but few are as peculiar as that of Marblehead.

In 1635 Massachusetts Bay was just a fledgling colony. The clergymen who ran it were determined to preserve its unity, but they could not always control who settled where. The area of Salem known as Marblenecke or Marble Head was settled largely by men and women from the English counties of Cornwall, Devon, and Dorset, who had come there because the surrounding waters teemed with fish. One Marblehead historian describes the area as a "fishing station populated by hardy, plebeian colonists . . . with little or no religious motivation." Others have described Marblehead's first residents as a rough group with a fondness for hard liquor —a far cry from the pious Puritans of Salem.

Others have described Marblehead's first residents as a rough group with a fondness for hard liquor —a far cry from the pious Puritans of Salem. 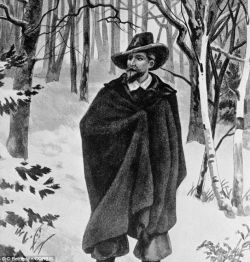 Then there were those, like Roger Williams, who initially seemed to conform but turned out to be far too outspoken. Williams arrived in Salem in 1631 but soon left for the Plymouth colony. He returned in 1633, and when Salem's minister died the following year, he was made pastor of the church. He immediately got into trouble over his views that church and state should be separate, and for his criticisms of the king. Such "erroneous and dangerous" thoughts could not be tolerated; colonial magistrates urged Williams to retract his statements and pressured Salem to convince the troublesome minister to change his mind.

All to no avail. In May 1635 the General Court ordered "that there shal be a plantacon [settlement] att Marble Head" and gave the inhabitants the right to do whatever they pleased with the land. As the population grew, the legislature assured them, they could have more of Salem. The independent-minded fishermen of Marblehead were delighted.

Two months later, several Salem men petitioned the General Court to give them clear title to land on Marblehead Neck to which they had claims. Their petition was rejected flat out because they had supported the Rev. Williams. Furthermore, when Salem's representatives to the General Court arrived in Boston, they were turned away.

On November 2, 1635, unable to convince Roger Williams of the error of his ways, the General Court banished him. Salem church members promptly apologized, "acknowledging their fault in joining with Mr. Williams," and in March 1636, the Court announced that Marblehead belonged to Salem after all.

Marbleheaders proved even more defiant than Roger Williams, however, absolutely refusing to conform to Puritan norms —drinking, fighting, rarely attending church. In 1648 the men of Salem were more than willing to let them go their own way and did not object when Marblehead petitioned for separation. In March 1649 the General Court decreed that Marble Head "shall be a town."

It was more typical for a town to divide when its population grew and spread out to the point where a second church was needed. In winter months, getting to the meetinghouse in the center of town from the outskirts each Sunday could be difficult. Eventually a group of neighbors would petition for a second parish and their own meetinghouse. It was not unusual for the second parish to become a separate town.

The men of Salem were more than willing to let them go their own way and did not object when Marblehead petitioned for separation.

A century after Marblehead and Salem parted ways, those who lived in Newbury's second parish — the "waterside" along the Merrimack River—sought relief from the General Court. In a 1763 petition, they claimed they were not fairly represented, that they shouldered a disproportionate tax burden, and that they got little for the taxes they paid: no public schools, no fire-fighting equipment, no road repairs.

The General Court agreed, and in February 1764, Newbury Port—a mere 647 acres—became the smallest town in the colony. Newbury farmers scoffed at this new town that was scarcely the size of three or four of their farms put together. Newburyport's future and fortunes lay with the sea, though, not on land, and by the middle of the nineteenth century, Newburyport's waterfront would have one of the greatest concentrations of shipyards along the entire North Atlantic coast. To add insult to injury, when thriving Newburyport wished to expand along the river, it needed more of Newbury. In 1851, it got what it wanted, including the lot on which Newbury's town hall stood.

Newburyport: Stories from the Waterside, by Liz Nelson (Commonwealth Editions, 2000).

On this day in 1704, the town of Newbury voted to pay a bounty to men who had killed two wolves on Plum Island. Wolves were a threat to the cattle, sheep, and pigs grazing...

On this day in 1635, Puritan minister Roger Williams was found guilty of spreading "newe & dangerous opinions" and banished from the Massachusetts Bay Colony. Before leaving England in 1630, Williams had seen heretics whipped,...