The first man I met in prison who made any positive impression on me whatever was a fellow inmate, "Bimbi." I met him in 1947, at Charlestown. He was a light, kind of red-complexioned Negro, as I was; about my height, and he had freckles. Bimbi, an old-time burglar, had been in many prisons. In the license plate shop where our gang worked, he operated the machine that stamped out the numbers. I was along the conveyor belt where the numbers were painted.

Bimbi was the first Negro convict I'd known who didn't respond to "Wha'cha know, Daddy?" Often, after we had done our day's license plate quota, we would sit around, perhaps fifteen of us, and listen to Bimbi. Normally, white prisoners wouldn't think of listening to Negro prisoners' opinions on anything, but guards, even, would wander over close to hear Bimbi on any subject.

He would have a cluster of people riveted, often on odd subjects you never would think of. He would prove to us, dipping into the science of human behavior, that the only difference between us and outside people was that we had been caught. He liked to talk about historical events and figures. When he talked about the history of Concord, where I was to be transferred later, you would have thought he was hired by the Chamber of Commerce, and I wasn't the first inmate who had never heard of Thoreau until Bimbi expounded upon him. Bimbi was known as the library's best customer. What fascinated me with him most of all was that he was the first man I had ever seen command total respect…with his words.

…Out of the blue one day, Bimbi told me flatly, as was his way, that I had some brains, if I'd use them. I had wanted his friendship, not that kind of advice. I might have cursed another convict, but nobody cursed Bimbi. He told me I should take advantage of the prison correspondence courses and the library.

…. So, feeling I had time on my hands, I did begin a correspondence course in English…Through the correspondence exercises and lessons, some of the mechanics of grammar gradually began to come back to me.

After about a year, I guess, I could write a decent and legible letter. About then, too, influenced by having heard Bimbi often explain word derivations, I quietly started another correspondence course—in Latin.

From The Autobiography of Malcom X, as told to Alex Haley (Ballantine Books, 1965).

I think it was great you had this topic but it is not correct to say Malcolm "drifted" to Boston. He was formally invited by his half sister Ella Little -Collins whose house on Dale Street in Roxbury still stands. and he stayed with her for quite awhile. He at first worked a variety of jobs in Roxbury and the South End including at the Townsend Drug store and as a shoe shine boy at I think the Roseland. ------------------------- Marcia Discover Roxbury
New Book on Malcolm

This is just to recommend a new novel called "Striver's Row" by Kevin Baker which recounts the early life of Malcolm Little in Boston and in Harlem. It's the third book in a trilogy that includes "Paradise Alley" and "Dreamland".
Login

On this day in 1946, 20-year-old Malcolm Little entered the state prison in Charlestown to begin serving a sentence for burglary. While in jail, he joined the Black Muslims, a new branch of Islam. Burning to know more about his faith, he began a campaign to improve his reading and writing. After copying an entire dictionary page-by-page, he read every book the prison library had in philosophy, history, literature, and science. He later said, "Months passed without my even thinking about being imprisoned. In fact, up to then, I had never been so truly free in my life." When he was paroled in 1952, Malcolm X became one of the country's most compelling black leaders.

His desire to read was so intense that he would slip out of bed after the 10 o'clock "lights out" order and sit on the floor near the door to his cell, where he could see dimly by the glow of a bulb in the corridor. 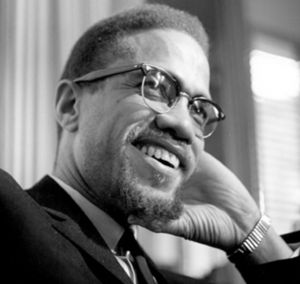 Malcolm X, one of the most influential black leaders of the twentieth century, found his life's calling in jail. During the seven years he spent in Massachusetts state prisons, Malcolm X joined the Black Muslims, educated himself, and became an outspoken defender of black nationalism. By the time he was paroled in 1952, he was well equipped to advance the Black Muslim cause.

Born Malcolm Little, he was the son of a Baptist minister from Omaha. (On his release from prison, Malcolm adopted "X" as his surname to represent the African family name lost when his ancestors were enslaved.) His father was a strong supporter of civil rights, and the Littles were often harassed for their views. When Malcolm was six, his father died in a streetcar accident. His mother later suffered a nervous breakdown and was committed to a mental hospital.

An angry and embittered Malcolm dropped out of school after the eighth grade. He drifted to Boston, then to New York City and back to Boston, where he began using and selling drugs. Although he worked off and on as a waiter and shoe shiner, Malcolm's real job was "hustling"— drug dealing, gambling, prostitution, racketeering, and robbery. In 1946 at the age of 20, he was arrested on burglary charges. He was convicted and sentenced to eight to ten years in Massachusetts state prison.

"I woke up the next morning, thinking about those words — immensely proud to realize that not only had I written so much at one time, but I'd written words that I never knew were in the world." 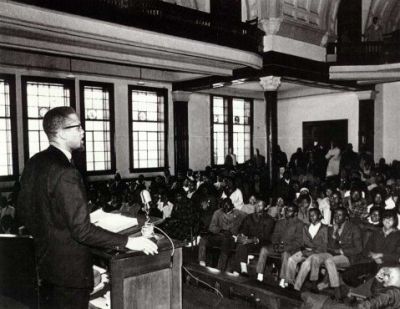 In the prison in Charlestown, Malcolm X soon earned the nickname "Satan" for his seething hatred and cursing of God, the Bible, and all things religious. His sisters visited and wrote regularly, urging him to embrace the "black man's religion."

They introduced him to the teachings of Elijah Muhammad, leader of the Black Muslims. Malcolm was powerfully drawn to Muhammad's claim that the white man was the devil and that the history of the world was one long story of white men "pillaging and raping and bleeding and draining the whole world's nonwhite people."

As he absorbed Elijah Muhammad's teachings, Malcolm's confidence and dignity began to grow. He wanted to learn more, but his limited reading and writing ability made it difficult. He decided to educate himself.

He borrowed a dictionary and began systematically reading it. "In my slow, painstaking, ragged handwriting," he later remembered, "I copied into my tablet everything printed on that first page, down to the punctuation marks. I believe it took me a day. Then aloud, I read back, to myself, everything I'd written on the tablet. . . . I woke up the next morning, thinking about those words — immensely proud to realize that not only had I written so much at one time, but I'd written words that I never knew were in the world."

He proceeded to copy the dictionary's next page and eventually copied the entire book. When he was finished, he "could for the first time pick up a book and read and now begin to understand what the book was saying."

"No university would ask any student to devour literature as I did when this new world opened to me, of being able to read and understand."

Through the efforts of his sister, Malcolm was transferred to an experimental prison in Norfolk, which had a large library. He spent the next five years reading. "No university would ask any student to devour literature as I did when this new world opened to me, of being able to read and understand."

His desire to read was so intense that he would slip out of bed after the 10 o'clock "lights out" order and sit on the floor near the door to his cell, where he could see dimly by the glow of a bulb in the corridor. "At one hour intervals the night guards paced past every room. Each time I heard the approaching footsteps, I jumped into bed and feigned sleep. And as soon as the guard passed, I got back out of bed onto the floor area of that light glow, where I would read for another 58 minutes. That went on until three or four every morning."

Malcolm read broadly, from Socrates and Ghandhi to Herodotus and W.E.B. DuBois. He wanted to test his new faith against the writings of historians, philosophers, and scientists. Years later, he wrote in his autobiography, "I have often reflected upon the new vistas that reading opened to me. I knew right there in my prison that reading had changed forever the course of my life. . . . My homemade education gave me, with every additional book that I read, a little bit more sensitivity to the deafness, dumbness, and blindness that was afflicting the black race in America."

". . . with every additional book that I read, a little bit more sensitivity to the deafness, dumbness, and blindness that was afflicting the black race in America."

When Malcolm X was paroled in 1952, he went to Chicago to meet Elijah Muhammad. He joined the Nation of Islam and, within a year, had returned to Boston to become Minister at Islam Temple Number Eleven in Roxbury.

His provocative, incendiary, and often vengeful speeches challenged white authority. In contrast to nonviolent black activists such as Martin Luther King, Jr., Malcolm X insisted that violent action might sometimes be necessary to achieve political and social equality. His impeccable personal conduct and his inspirational message won him a devoted following among black Americans.

In time, Malcolm X became disillusioned with Elijah Muhammad. In 1964 he broke with the Nation of Islam. He converted to orthodox Islam and moderated his speeches. A trip to Mecca exposed him to people of all colors who practiced the Islamic faith, shattering his long-held belief that whites were inherently evil. He began to advocate self-help, self-defense, education, and cooperation.

More militant black nationalists felt betrayed. He received death threats, and his home was firebombed. On February 21, 1965, he was assassinated as he addressed a crowd at the Audubon Ballroom in Harlem. Three men were arrested and charged with his murder. Prosecutors claimed that the killing was meant as "an object lesson for Malcolm's followers," but no direct evidence was ever found to link the murderers to the Nation of Islam.

Although it is still a private home and not open to the public, work is underway to preserve the home of Malcolm X's sister at 72 Dale Street in Roxbury, where he lived during his time in Boston.

The Autobiography of Malcolm X, as told to Alex Haley (Ballentine Books, 1964).

On this day in 1965, 20-year-old Arlo Guthrie was convicted of littering in the Berkshire County town of Stockbridge, and the song "Alice's Restaurant Massacree" was born. The son of legendary musician Woody Guthrie, Arlo...