Mabel Loomis's first reference to Emily Dickinson came in a letter to her parents of November 6, 1881, only two months after she arrived in Amherst. It had not taken her long to pick up the gossip.

I must tell you about the character of Amherst. It is a lady whom the people call the Myth. She is a sister of Mr. Dickinson, & seems to be the climax of all the family oddity. She has not been outside of her own house in fifteen years, except once to see a new church, when she crept out at night, & viewed it by moonlight. No one who calls upon her mother & sister ever see her, but she allows little children once in a great while, & one at a time, to come in, when she gives them cake or candy, or some nicety, for she is very fond of little ones. She writes finely, but no one ever sees her. Her sister, who was at Mrs. Dickinson's party, invited me to come & sing to her mother some time and I promised to go & if the performance pleases her, a servant will enter with wine for me, or a flower, & perhaps her thanks; but just probably the token of approval will not then, but a few days after, some dainty present will appear for me at twilight. People tell me that the myth will hear every note – she will be near, but unseen. . . . Isn't that like a book? So interesting.

Most folks with mental illness are extremely creative. Remember "Normal is boring"! thank you Emily for being such a great example.
Mental Illness and Creativity

I'm not sure that choosing to live as a recluse is evidence of mental illness, but thank goodness, for our sake, her gifts weren't subsumed in the mundane, deadening toils toils of marriage, household management, and child and husband care.
Login

On this day in 1882, Mabel Loomis Todd first recorded her impressions of her mysterious Amherst neighbor. Emily Dickinson always wore white and had her hair arranged "as was the fashion fifteen years ago." "She writes the strangest poems, and very remarkable ones," Mrs. Todd noted in her journal, adding, "She is in many respects a genius." Few scholars would disagree. Emily Dickinson was a genius and her poems were remarkable, indeed. Although she lived the majority of her adult life in seclusion, she wrote some of the most potent poems in the English language. When she died in 1886, her sister asked Mabel Todd to copy and edit the poems. In 1890 the first volume was published. Only then did the world discover Emily Dickinson.

Although scholars have worked to un-do Mabel Todd's changes, it seems clear that, without her, Emily Dickinson's poems might never have reached print and her letters would probably have disappeared. 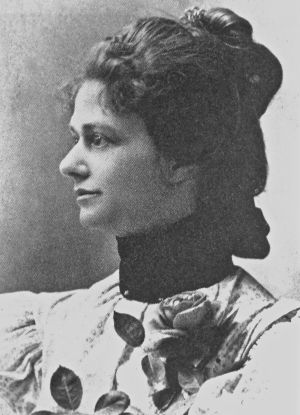 Emily Dickinson was born on December 10, 1830, in the Connecticut Valley village of Amherst, where her grandfather had helped to found Amherst College. The daughter of a prominent lawyer and his wife, she attended a local academy and then Mount Holyoke Female Seminary in nearby South Hadley. Early on, she showed intellectual curiosity and a flair for writing. "Her compositions were unlike anything ever heard — and always produced a sensation — both with the scholars and Teachers," her brother Austin wrote after her death. "Her imagination sparkled — and she gave it free rein."

After a year at Mt. Holyoke, she rejoined her parents, brother, and sister Lavinia at the Homestead, their comfortable home in the center of Amherst. The 18-year-old enjoyed an active social life; sugaring and sleighing parties, lectures, readings, social gatherings, and new friendships filled her days. When she began writing poems in the 1850s, she circulated them among friends, often including one with a letter or gift. None were submitted for publication, but several appeared in print anonymously.

Many people perceived what her brother described as her "peculiar personal sensitiveness." He explained that "as she saw more and more of society, . . . she could not resist the feeling that it was painfully hollow." When she was in her early twenties, she suffered from some kind of emotional disorder. Around the time she turned 30, she seemed to experience an unidentified trauma. Her handwriting changed, and she wrote an astonishing number of poems, most expressing a profound sense of loss.

"Her imagination sparkled — and she gave it free rein." 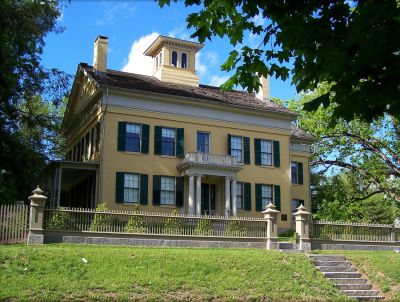 Gradually Emily Dickinson withdrew from public life. Until the mid 1860s, she was still taking long walks around Amherst with her beloved Newfoundland by her side; her observations of nature found their way into her work. After her dog died in 1866, she rarely ventured beyond the Homestead. She read voraciously, however, and carried on an active correspondence. And she wrote what are still some of the most spellbinding poems in the English language.

There were hints, never substantiated, that unrequited love had driven the young woman into the seclusion of her childhood home, where she lived out her life with her immediate family close at hand and protected from the outside world. Emily Dickinson did not answer the doorbell or meet people face to face — even Mabel Todd, although she enjoyed corresponding with her and loved to listen to her piano playing, albeit from another room.

Mabel Loomis Todd had moved to Amherst in 1881 with her husband David, the new director of the Amherst College Observatory. Attractive, vivacious, well-read, and an accomplished pianist and painter, Mabel was soon socializing with the leading families of Amherst, including that of Austin and Susan Dickinson, who lived in the Evergreens, the house they built next door to the Homestead. The Dickinsons' marriage had been troubled for a long time; within a year, Mabel and Austin, who was 27 years her senior, had begun a passionate love affair that lasted until Austin Dickinson's death.

Emily Dickinson did not answer the doorbell or meet people face to face — even Mabel Todd, although she enjoyed corresponding with her and loved to listen to her piano playing, albeit from another room.

The relationship was hardly a secret. Both spouses knew. David Todd tolerated the situation with grace; Susan Dickinson did not. Austin's sisters were supportive of the lovers, who often met at their home. Many years later, Mabel's daughter wrote that Emily "was glad that Austin had found some comfort . . . In my mother's words, 'Emily always respected real emotion.'"

Mabel Todd was one of the first people to recognize the brilliance of Emily Dickinson's poetry. Critics have since admired its compactness, tension, and wit. Full of emotional and intellectual energy, the poems were unorthodox in style and punctuation.

When the poet died in 1886 at age 56, Lavinia Dickinson found a box of hand-stitched booklets full of her sister's poems. Devoted to Emily and her writing, Lavinia turned to Mabel Todd for help. She "knew I always had faith in the poems," Mabel wrote in her journal, "and she begged me to copy and edit them — put them all into shape."

The task was enormous. There were almost 800 poems — eventually 1,800 would turn up. Mabel reported, they had "wonderful effect on me, mentally and spiritually. They seemed to open the door into a wider universe than the little sphere surrounding me." With the best of intentions, she changed "words here and there . . . to make them smoother" and tidied up the punctuation. She convinced the Boston editor Thomas Wentworth Higginson to help her get them published.

With the best of intentions, she changed "words here and there . . . to make them smoother" and tidied up the punctuation.

Higginson was a logical person to enlist in the project. Emily had asked his opinion of her writing more than a decade earlier. He called her his "eccentric poetess," corresponded with her regularly, and visited her in Amherst on at least two occasions.

Because the poems were so unconventional, Higginson was not optimistic but he submitted the manuscript to Houghton Mifflin. The publisher promptly rejected the collection as "queer — the rhymes are all wrong." Another agreed to publish the book, but only on the condition that Lavinia Dickinson pay most of the costs. The first volume came out in November of 1890; within six months, it was already in its sixth edition. Mabel Todd prepared a second series for publication a year later, and in 1894 brought our two volumes of the poet's letters.

Although scholars have worked to un-do Mabel Todd's changes, it seems clear that, without her, Emily Dickinson's poems might never have reached print and her letters would probably have disappeared. American literature would have lost one of its most singular voices.

The Emily Dickinson Museum in Amherst includes the Homestead (Dickinson's birthplace and home) and the Evergreens, the house her father built for her brother Austin next door.

Austin and Mabel: The Amherst Affair and Love Letters of Austin Dickinson and Mabel Loomis Todd, by Polly Longsworth (Farrar, Straus and Giroux, 1984).