THE BAY STATE STRIKE. MOVEMENT AMONG THE WOMEN

In company with some of the Boston correspondents, I yesterday visited the town of Marblehead … to witness the doings of the mass meeting, composed of the combined forces of Lynn and Marblehead.....

The most interesting part of the whole movement took place last evening, and will be continued tonight. I refer to the mass meeting of the binders and stitchers held by

THE FEMALE STRIKERS AT LIBERTY HALL

….The streets were thronged with girls of various ages and sizes—some twelve years old, and others forty….

The hall was filled to its utmost capacity. The ladies were such as you can imagine free, self-supporting, fearless, happy women to be. We have seen many assemblages of women, but have never beheld a more intelligent, earnest, "peart" set, than were in Liberty Hall last night.

The object of the meeting was the hearing the reports of the Committees who had been deputed to make a list of reasonable prices [paid for finished work], and to solicit the girls of Lynn and the surrounding towns to join the strike movement.

There are two classes of workers—those who work in the shops and those [who] work at home—the former use the machines and materials of the bosses, while the latter work on their own machines, or work by hand, furnishing their own materials. It is evident that the latter should receive higher pay than the former, and the report not having considered this fact, was subjected to severe handling. The discussion which followed was rich beyond description—the jealousies, piques and cliques of the various circles being apparent as it proceeded. One opposed the adoption of the report because "the prices set were so high that the bosses wouldn't pay them." Cries of "Put her out," "Shut up," "Scabby," and "Shame!" arose on all sides, but, while the reporters were alarmed, the lady took it all in good part, and made up faces at the crowd….

Two ladies, one representing the machine interest, and the other the shop girls, became very much excited, and were devoting themselves to an expose of each other's habits, when the Chairman, with the perspiration starting from every pore, said in a loud and authoritative tone of voice: "Ladies! look at me; stop this wranglin'. Do you care for your noble cause? Are you descendants of MOLLY STARK or not? Did you ever hear of the spirit of '76? [yes, yes, we've got it.] Well, then, do behave yourselves."

All parties proposed to adjourn to Tuesday night, when they would have speeches and be more orderly. Canvassing Committees were appointed to look up female strikers and to report female "scabs." And with a vote of thanks to the Chairman, the meeting adjourned.

On this day in 1860, thousands of striking shoeworkers filled Lyceum Hall in Lynn. By choosing to begin their protest on Washington's birthday, the strikers were invoking the memory of their revolutionary forefathers. Lynn had been a shoemaking town since the early 1800s. Hard times had now caused management to cut wages and speed up production. Declaring they would "live by honest toil, but never consent to be slaves," over 20,000 workers — more than had participated in any previous strike — joined the walkout. The size of the protest did not insure its success, however. With the owners refusing to negotiate and growing numbers of workers returning to their jobs, the strike collapsed after six weeks. 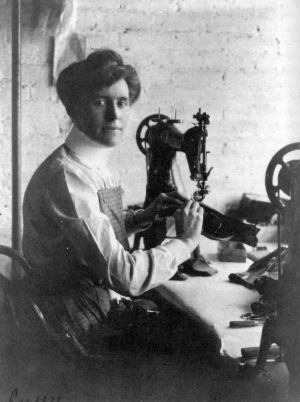 When the Lynn shoeworkers began their walkout on Washington's birthday, they were making a connection between their grievances and those of their forefathers who had fought for independence. The strikers insisted that the rights they sought to preserve were the same rights enjoyed by free men everywhere — the right not to be controlled by an oppressive master. This time, though, the adversary was not the English king but the factory owners who refused to pay a decent wage.

In the course of the 1860 walkout, over 20,000 workers would participate in what has been called "one of the greatest workers' protests in the history of the nation."

Lynn had been a center of shoemaking since the early nineteenth century. But the invention of new machinery and the introduction of new systems of production had changed the nature of the work. In the early years of the industry, farm families had used the relative quiet of the winter months to cut and stitch shoe leather. It was usually women who did the "binding" or sewing of the upper part of the shoes, while men worked on other parts of the process. They worked at home and at their own pace, and were paid by the piece when they turned in finished items.

As more and more shoemakers concentrated in the Lynn area, some local families gave up farming and devoted themselves entirely to shoemaking, setting up shop in small "ten-footers" next to their houses. Eventually, however, the men who supplied materials and bought finished shoes from the shoemakers realized that they could save money and increase control of production if they centralized the work in factories. When the sewing machine was adapted for shoemaking in 1852 and steam began to power the machines, the change to factory production accelerated. 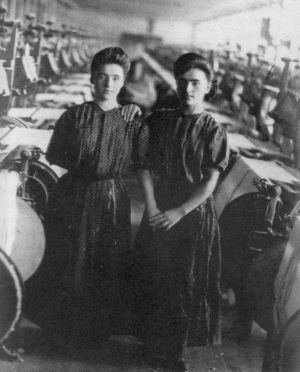 Many Lynn shoeworkers were unhappy about these changes. What had been a craft with a proud artisan tradition was fast becoming a factory-based industry. By 1850, workers in Lynn were producing 4,500,000 pairs of shoes a year.

Working on steam-powered machines in large factories, workers lost the control they had enjoyed in the "ten footer." The labor was physically exhausting, and there was constant pressure to speed up production.

It was not, however, primarily dissatisfaction with working conditions that precipitated the strike. In 1857, the nation suffered an economic crisis. Many shoe workers lost their jobs and ran up crippling debts while out of work. When they were rehired the next year, their wages had been cut, but their debts remained. Men were now earning $3 and women $1 for six 16-hour days a week.

The first labor union in Lynn was born out of frustration with this situation. Early in 1860, the Mechanics Association presented their demands to the manufacturers. Heading the list were an increase in pay and a standardized schedule of wages. When the employers refused, the union called a strike.

in the midst of a blizzard, a huge procession of women strikers braved drifting snow and fierce winds to march through the streets of Lynn. 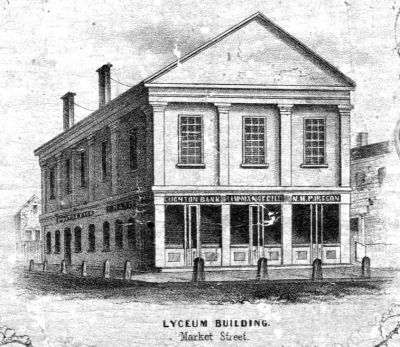 On the morning of February 22nd, 3,000 shoemakers met in Lynn's Lyceum Hall. They formed committees and arranged for volunteer guards to prevent violence and keep "scabs" from coming into the city and shoes from being shipped out. Within a week, the strike spread throughout New England, with over 20,000 shoeworkers in 25 different towns refusing to work.

The strike was marked by the largest labor protests New England had ever seen. On March 17th, a demonstration by 10,000 shoeworkers from Lynn, Salem, Marblehead, and other Essex County towns caused Lynn officials to call in police and militia units from Boston.

In the early days of the protest, women had joined men in the walkout. Their participation in the strike was crucial, not just because they were an important part of the shoemaking workforce, but also because women lent an air of morality and justice to the effort.

On March 7th, in the midst of a blizzard, a huge procession of women strikers braved drifting snow and fierce winds to march through the streets of Lynn. They carried signs that read, "American Ladies will not be slaves. . . . We Dare Battle for the Right, Shoulder to Shoulder with our Fathers, Husbands, and Brothers."

"I like a system which lets a man quit when he wants to, and wish it might prevail everywhere."

But the women would be disappointed. It turned out that the men leading the strike were planning to demand wage increases only for men. Higher pay for women would, they feared, doom the strike to failure. Many of the women abandoned the strike.

The protest in Lynn captured national attention. Abraham Lincoln told a newspaper reporter that he was "glad to see that a system of labor prevails in New England under which laborers can strike when they want to, where they are not obliged to labor whether you pay them or not. I like a system which lets a man quit when he wants to, and wish it might prevail everywhere."

Not surprisingly, the factory owners did not share Lincoln's attitude. They refused to yield, and by the end of March growing numbers of shoeworkers had returned to their jobs. By early April, the historic strike was over.

Within a year, the outbreak of the Civil War would eclipse all forms of labor protest.

One of the Massachusetts Heritage State Parks is in downtown Lynn.

The Lynn Museum is dedicated to collecting, preserving, and interpreting the city's long history.

We Will Rise in Our Might: Workingwomen's Voices from Nineteenth-Century New England, by Mary H. Blewett (Cornell University Press, 1991).