In 1859 Lydia Maria Child exchanged a series of letters with Henry Wise, Governor of Virginia, in the months after John Brown's failed raid on Haper's ferry.The lenghthy correspondence was reprinted in newspapers all across the country. This excerpt comes from a letter written from her home in Wayland on December 17, 1859:

Prolonged absence from home has prevented my answering your letter so soon as I intended. I have no disposition to retort upon you the "two-fold damnation" to which you consign me. On the Contrary, I sincerely wish you well, both in this world and the next. . . .

Do you candidly think we deserve "two-fold damnation" for detesting [the system of slavery? Can you not believe that we may hate the system, and yet be truly your friends? I make allowance for the excited state of your mind, and for the prejudices induced by education. I do not care to change your opinion of me; but I do wish you could be persuaded to examine this subject dispassionately, for the sake of the prosperity of Virginia, and the welfare of unborn generations, both white and colored. For thirty years, Abolitionists have been trying to reason with slaveholders, through the press, and in the halls of Congress. Their efforts, though directed to the masters only, have been met with violence and abuse almost equal to that poured on head of John Brown. Yet surely we, as a portion of the Union, involved in the expense, the degeneracy, the danger, and the disgrace, of the iniquitous and fatal system, have a right to speak about it, and a right to be heard also. At the North, we willingly publish pro-slavery arguments, and ask only a fair field and no favor for the other side. But you will not even allow your own citizens a chance to examine this important subject. Your letter to me is published in Northern papers, as well as Southern; my reply will not be allowed to appear in any Southern paper. The despotic measures you take to silence investigation, and shut out the light from your own white population, prove how little reliance you have on the strength of your cause. In this enlightened age, all despotisms ought to come to an end by the agency of moral and rational means. But if they resist such agencies, it is in the order of Providence that they must come to an end by violence. History is full of such lessons. . . .

On this day in 1880, Lydia Maria Child, whom abolitionist William Lloyd Garrison called "the first woman in the Republic," was buried in Wayland. A successful novelist and magazine editor and the author of a widely read guide to household economy, she sacrificed her career by taking a highly unpopular stand against slavery. Her anti-slavery work enraged most of the nation and cost Child dearly. She could no longer sell her books or publish her writings, and she lost her job at a children's magazine. But Child continued to argue eloquently and courageously against injustice of all kinds. The eulogist at her funeral declared that Lydia Maria Child was "ready to die for a principle and starve for an idea. . . ."

. . . she was only 22 when she published a novel in which a colonial New England girl falls in love and bears a child with a noble native man. 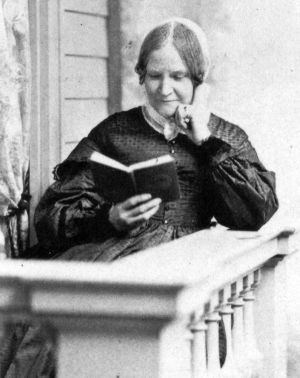 Born in 1802, Lydia Maria Child grew up under the wing of her bookish older brother; she had more opportunity than most girls to read, study, and debate new ideas. As she matured, she became a serious religious searcher and a staunch individualist. An independent thinker with a soft spot for the downtrodden, she was only 22 when she published a novel in which a colonial New England girl falls in love and bears a child with a noble native man. The novel brought her instant commercial success and celebrity; other novels and stories followed. Soon she was invited to edit a popular children's magazine. At a time when few women had a chance to earn a decent living, Lydia Maria Child had established herself as a well-paid professional.

In 1828 she married David Child, an idealistic but impractical lawyer. He nearly ruined the couple financially by continually investing their resources in good causes and quixotic ventures that failed. In 1829 Maria published a practical guide for housewives who were trying, as she was, to live economically. The ingenious little text, The Frugal Housewife, sold extremely well and brought Child economic security and even greater popularity.

"While we bestow our earnest disapprobation on the system of slavery, let us not flatter ourselves that we are in reality any better than our brethren of the South."

Within two years of publishing The Frugal Housewife, Lydia Maria Child's life would change dramatically. In 1831 the radical abolitionist William Lloyd Garrison began publishing The Liberator. The two met and Child was converted to Garrison's view that slavery was so morally repugnant it should be abolished immediately.

By daring to condemn slavery at a time when abolition was still highly unpopular even in the North, Child became the object of national hatred. Almost overnight, she lost her livelihood, her popularity, and her reputation. She was undeterred, insisting "I want to shoot the accursed institution from all quarters of the globe. I think, from this time till I die, I shall stop firing only long enough to load my guns." Child devoted the rest of her long life to fighting discrimination in all forms.

She poured her heart into an eloquent and carefully argued attack on slavery, An Appeal in Favor of that Class of Americans Called Africans. The book graphically describes the horrific conditions of slave life, analyzes the ways slavery violated Christian teaching, and calls on all Americans — especially northerners — to commit themselves to abolition. In a typically hard hitting passage, Child wrote, "While we bestow our earnest disapprobation on the system of slavery, let us not flatter ourselves that we are in reality any better than our brethren of the South. Thanks to our soil and climate, . . . slavery does not exist among us; but the very spirit of the hateful and mischievous thing is here in all its strength. . . . Our prejudice against colored people is even more inveterate than it is at the South."

"No woman in this country . . . sacrificed so much for principles as Mrs. Child."

The publication of this highly controversial work all but ruined Child's career. People stopped buying her old books, and publishers would not accept anything new from her. She lost her position editing the children's magazine, and she and her husband struggled to make ends meet. The poet John Greenleaf Whittier later remembered, that "her praises were suddenly silenced. No woman in this country . . . sacrificed so much for principles as Mrs. Child."

But her career was not over. She continued to express her opinions freely and openly regardless of their popularity. She found a new audience as the editor of the weekly National Anti-Slavery Standard. She published a collection of her letters and completed a three-volume work that included her often critical assessment of various religious doctrines.

In 1859 Lydia Maria Child once more became the object of public condemnation. An admirer of John Brown, she wrote to him offering to nurse his wounds after the disastrous raid at Harper's Ferry. Brown declined, but the letter, along with a scathing response from Virginia's governor and a vicious attack on Child's character, were published and widely read. She responded in print, and was soon back at the center of fierce controversy. She defended herself ably and eloquently in a series of letters that remain articulate and moving statements of moral courage.

After the Civil War, Child worked tirelessly on behalf of equal rights for the former slaves, for Native Americans, and for women. She never stopped writing. Over the course of her life, she published more than 40 books and countless stories and poems.

Wayland, Massachusetts, was Lydia Maria Child's home between 1853 and 1880. Her former home at 91 Old Sudbury Road is still a private residence. She was a member of the First Parish of Wayland and was buried in the town's North Cemetery.

The First Woman in the Republic, by Carolyn L. Karcher (Duke University Press, 1994).

On this day in 1892, the poet John Greenleaf Whittier died at the age of 85. He had come a long way from his Quaker boyhood on a struggling farm in Haverhill. He began writing...