August 'twas the twenty-fifth,
Seventeen hundred forty-six;
The Indians did in ambush lay,
Some very valiant men to slay,
The names of whom I'll not leave out.
Samuel Allen like a hero fout,
And though he was so brave and bold,
His face no more shalt we behold
Eteazer Hawks was killed outright,
Before he had time to fight, -
Before he did the Indians see,
Was shot and killed immediately.
Oliver Amsden he was slain,
Which caused his friends much grief and pain.
Simeon Amsden they found dead,
Not many rods distant from his head.
Adonijah Gillett we do hear
Did lose his life which was so dear.
John Sadler fled across the water,
And thus escaped the dreadful slaughter.
Eunice Allen see the Indians coming,
And hopes to save herself by running,
And had not her petticoats stopped her,
The awful creatures had not catched her,
Nor tommy hawked her on the head,
And left her on the ground for dead.
Young Samuel Allen, Oh lack-a-day!
Was taken and carried to Canada.

On this day in 1746, Lucy Terry Prince was among the residents of Deerfield present during an Abenaki raid on the village. Lucy, an enslaved woman, described the horrific event in "The Bars Fight," the earliest known poem by a black writer in North America. The work is also believed to bethe most accurate account of what happened that day. Five colonists died, one was badly wounded, and another was taken captive. We know more about the raid than we do about the poet. No other writing of hers has been found. We do know that, at her death in 1821, she warranted an unusually long obituary that praised her as a "remarkable woman [with] an assemblage of qualities rarely to be found among her sex."

She was an important enough figure that the principal speaker at her funeral was the Rev. Lemuel Haynes, the first African American to be ordained in the Congregational Church. 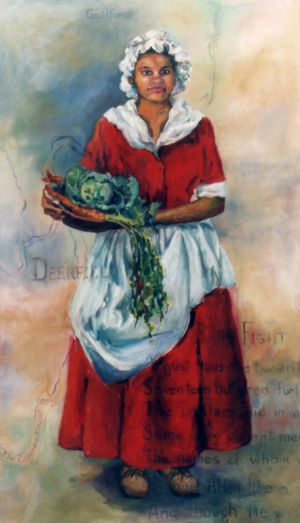 Lucy Terry Prince's obituary is noteworthy first because of its length — obituaries at that time were generally brief, especially for women — and second because newspapers rarely took note of a black person's passing. Lucy was living in Vermont when she died, and her obituary was originally published in the Vermont Gazette. The fact that it was reprinted in a Greenfield, Massachusetts, paper suggests that, while she had left the state years before, she had not been forgotten.

Born in Africa, Lucy was kidnapped as a small child and brought to Bristol, Rhode Island, where merchants grew rich from Rhode Island's flourishing slave trade. She was about four when Ebenezer Wells, a tavern owner from Deerfield, purchased her and took her to live with him and his wife in western Massachusetts.

The Wellses were childless, and Lucy may have been more integrated into their household than most "servants for life," as New Englanders called their enslaved men and women. Records show that Lucy was baptized in 1735 and became a church member nine years later.

The poem opened: "August 'twas the twenty-fifth, / Seventeen hundred forty-six; / The Indians did in ambush lay, / Some very valiant men to slay."

On the morning of August 25, 1746, Deerfield came under assault from the Abenakis. The settlement had endured violent raids before, but things had been quiet from the mid-1720s to the 1740s. The attack on Deerfield by the French-allied Abenaki in 1746 found "the English colonists woefully unprepared to war." Five whites were killed, along with two Abenaki. At 21, Lucy already had a reputation as a gifted storyteller. It surprised no one when she composed a poem, "The Bars Fight," about the traumatic events of that day.

The poem opened: "August 'twas the twenty-fifth, / Seventeen hundred forty-six; / The Indians did in ambush lay, / Some very valiant men to slay." Terry names the casualties of the attack along with some information about how they met their fate.

The poem drew on the African tradition of oral narrative. Although Lucy Terry was literate, scholars have speculated that she may not in fact have written "The Bars Fight" down at all but told and re-told the story and others repeated it. The earliest print version found is from a lecture given in 1819. The poem first appeared in a book when it was included in a history of western Massachusetts published in 1855.

Two of their sons would serve in the American Revolution.

Sometime around 1750, Abijah Prince, an enterprising formerly enslaved man who had served in the Massachusetts Bay militia, moved to Deerfield. He and Lucy married on May 17, 1756 and moved onto land owned by the Wells family. At some point, Lucy gained her freedom. It is possible that Ebenezer Wells gave Lucy her freedom or the hard-working Abijah may have purchased it. In any case, she, and therefore her children, were free by the time the first of their six children was born in 1757. Two of their sons would serve in the American Revolution.

By 1785 the family had left Deerfield and was living on its own land in Guilford, Vermont. Twenty years older than Lucy, Abijah died in 1794, and the family struggled to retain the property it had worked so hard to acquire. Lucy died on July 11, 1821, at the age of 97. She was an important enough figure that the principal speaker at her funeral was the Rev. Lemuel Haynes, the first African American to be ordained in the Congregational Church.

Over time, a number of legends developed about Lucy Terry Prince. One has it that she confronted the trustees of Williams College when they refused to admit her son. No documentation exists and the encounter is highly unlikely. Another is that she appeared before the U.S. Supreme Court, an event that new research has shown did not occur. However, in 1803 she did successfully argue an appeal of a land case before the Vermont Supreme Court -- remarkable evidence of the eloquence and assertiveness of Lucy Terry Prince.

The house where Lucy Terry Prince lived and worked before her marriage is part of Historic Deerfield.

Mr. and Mrs. Prince: How An Extraordinary Eighteenth-Century Family Moved Out of Slavery and Into Legend, by Gretchen Holbrook Gerzina (Amistad, 2008).

The Black Presence in the Era of the American Revolution, by Sidney Kaplan and Emma Nogrady Kaplan (The University of Massachusetts Press, 1989).