I trust that my last letter to my father has in some measure prepared you for the melancholy intelligence which this will bring to you. Our beloved Mary is no more. She expired on Sunday morning November 29, without pain or suffering, either of body or mind, and with entire resignation to the will of her heavenly Father. Though her sickness was long, yet I could not bring myself to think it dangerous until near its close. Indeed, I did not abandon hope of her recovery till within a very few hours of her dissolution, and to me the blow was so sudden, that I have yet recovered energy enough to write you the particulars of this solemn and mournful event. . . . Thus all the hopes I had so fondly cherished of returning home with my dear Mary in happiness and renovated health have in the providence of God ended in disappointment and sorrow unspeakable. . . .

It was Oliver Wendall Holmes who dubbed Boston the "hub of the universe."
Different years?

I've heard that it was a Boston bishop. The following was printed in the Pilot (newspaper of the Archdiocese of Boston) on 4/14/06: "A Boston bishop went to Pittsburgh, Pa., where his hosts proudly showed him where two rivers come together to form the Ohio River. According to the story, the bishop responded that, in Boston, the Charles and Mystic Rivers come together to form the Atlantic Ocean."
Different years?

Dana Gioa is famous to some outside poetry -- probably the only reason for it -- because of his "Atlantic Monthly" essay in which he bemoans/predicts the "death of poetry," his thesis being that fewer read poetry than once did. Contrary to that, he apparently knew that, "Longfellow knew that no American had ever been able to support himself as a poet." The reality is that the making of poetry required leisure, whereas most people must work for a living. And the reality is that reading poetry required the ability to read, and to buy and own books. So poetry always had a limited number of producers with the privilege of liesure, and a limited audience, usually of the wealthy, who had the privileges of education, books, and liesure. Suffice to say that there are at least a few poets and critics who don't buy Gioa's shallow thesis. ------------------------- A lie is halfway around the world before the truth can get its shoes on. -- Mark Twain
Different years?

On this day in 1835, 28-year-old Henry Wadsworth Longfellow was devastated by the death of his beloved young wife, Mary. The couple had been traveling in Europe as the poet prepared to begin teaching literature at Harvard. The distraught Longfellow gave vent to his grief, resolving to dedicate himself to a life of "goodness and purity like hers." He vowed to abandon "literary ambition . . . this destroyer of peace and quietude and the soul's self-possession," but by the time he returned to Cambridge in 1836, he had begun writing again and eventually remarried. Over the next four decades, he would become the most popular American poet who ever lived. Contemporary poet Dana Gioia calls him the "one poet average, non-bookish Americans still know by heart."

Fanny Appleton claimed to be annoyed at being featured in the book, and it took Longfellow seven years to persuade her to marry him. 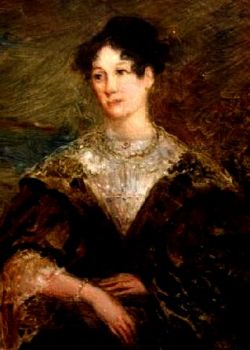 Henry Wadsworth Longfellow was born in 1807 in Portland, Maine (which was part of Massachusetts until 1820) to a family with deep roots in the Bay State. Six generations of Longfellow men had attended Harvard. His mother's family claimed descent from four Pilgrims, including John Alden and Priscilla Mullins. The poet's father was a successful lawyer, who provided the family with a comfortable home; his mother passed on to her son an intense and sensitive disposition and a love of music, poetry, and nature.

Longfellow was an early lover of books, especially the tales of America's first folklorist, Washington Irving. He later recalled, "Every reader has his first book. I mean to say one book among all others which in early youth first fascinates his imagination, and at once excites and satisfies the desires of his mind. To me, the first book was the Sketch Book of Washington Irving." His imagination fired by nature and romance, the young man began to write; by the time he was 13, he had published his first poem in a Portland newspaper.

At the age of 15, Longfellow entered Maine's Bowdoin College as a sophomore, joining Nathaniel Hawthorne in the class of 1825. Longfellow's father was determined that his son practice law, while the young man aspired to "a future eminence in literature." Although several magazines published his early poems, Longfellow knew that no American had ever been able to support himself as a poet. His dilemma was resolved shortly after graduation, when Bowdoin offered the gifted 18-year-old a professorship of modern languages.

"Every reader has his first book. I mean to say one book among all others which in early youth first fascinates his imagination . . ." 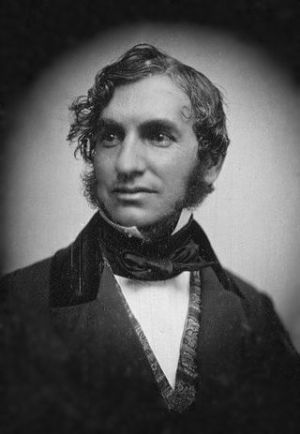 The condition of the professorship was that Longfellow travel to Europe to complete his education. From 1826 to 1829, he lived and studied in France, Italy, Spain, and Germany. Returning to the U.S. in 1829, he spent the next six years as professor and librarian at Bowdoin. He turned out six textbooks, as well as publishing essays modeled on Irving's Sketchbook. But his work — even after he married the beautiful and cultivated Mary Potter of Portland in 1831 — did not ease his yearning to escape from life in a small college town. His chance came in 1835, when Harvard invited him to join its faculty, once again on the condition that he take a year abroad to prepare. His joy at this good fortune soon turned to grief, when his beloved Mary died six months into their European stay.

Arriving in Cambridge in 1836, the young widower rented rooms at Craigie House, a handsome building on Brattle Street that had served as George Washington's headquarters during the siege of Boston. He set out to fulfill his academic duties while continuing his literary efforts. In 1839 he published Hyperion, an autobiographical tale whose high-spirited heroine was modeled on Fanny Appleton, the cultivated and exuberant daughter of Boston industrialist Nathan Appleton. She claimed to be annoyed at being featured in the book, and it took Longfellow seven years to persuade her to marry him. Their happy marriage produced six children.

Rather than Greek gods or medieval knights, he wrote about the natural beauty, indigenous peoples, and unpolished individuals found in his native land. 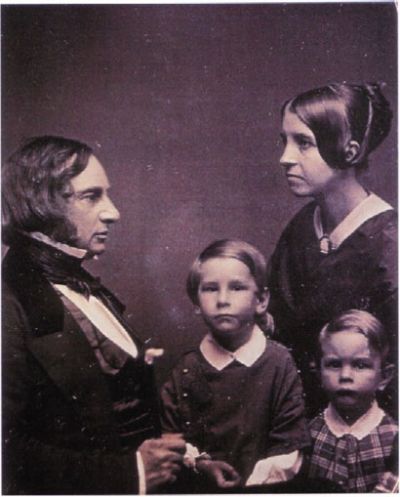 Nathan Appleton's wedding gift was the house on Brattle Street. Longfellow lived there for the rest of his life. The family home was a favorite gathering place for artists, intellectuals, and reformers, including Emerson, Hawthorne, Julia Ward Howe, Harriet Beecher Stowe, and Charles Sumner. An active abolitionist, Longfellow contributed money to help freedom-seeking and former slaves and to support the anti-slavery cause.

Longfellow's poetry sold so well that in 1854 he retired from Harvard to devote himself to writing, thus becoming America's first self-supporting poet. The popularity of his poetry is partly explained by its song-like structure and pleasant, musical meter. But the subjects he chose resonated with his countrymen. Rather than Greek gods or medieval knights, he wrote about the natural beauty, indigenous peoples, and unpolished individuals found in his native land. He popularized Native American folklore and composed powerful poems against slavery. Along with other writers and artists, he helped create a distinctly American culture.

When the "spreading chestnut tree" that he had written about in "The Village Blacksmith" died, the children of Cambridge donated their pennies so that the Brattle Street landmark could be made into a chair for the poet.

The romanticized view of America's past found in Longfellow's poetry has often been mistaken for history. In "Song of Hiawatha," one of his most famous works and an early example of multiculturalism, he created a heroic and majestic Native American world. Stories of his Puritan ancestors inspired "The Courtship of Miles Standish." The account given in "The Midnight Ride of Paul Revere" is better known than the real story of the events of April 18, 1775.

In 1861 tragedy struck again. Longfellow lost his second wife in a house fire, and with her, his poetic muse. He devoted the last years of his life to his translation of Dante's Divine Comedy, a work that is still in print. He also entertained an adoring public who considered him America's greatest poet. When the "spreading chestnut tree" that he had written about in "The Village Blacksmith" died, the children of Cambridge donated their pennies so that the Brattle Street landmark could be made into a chair for the poet. Longfellow lived to see his birthday celebrated as a school holiday. He died in 1882.

Longfellow National Historic Site in Cambridge was the poet's home from 1837 to 1882; it was also General George Washington's headquarters from July 1775 to April 1776.

Longfellow House is part of the Underground Railroad Network to Freedom.

Longfellow: The Poetical Works of Longfellow with an introduction by George Monteiro (Houghton Mifflin Company, 1975).